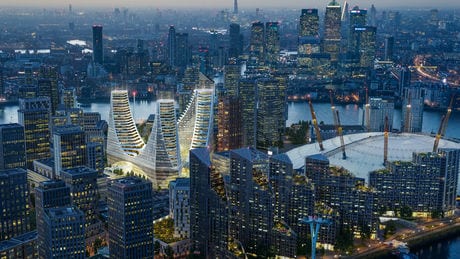 Knight Dragon has unveiled, together with the mayor of London Sadiq Khan, the new project by Santiago Calatrava to be built in London. The transformation of Greenwich Peninsula has the goal of creating harmony between culture and business. Thanks to this futuristic project, residents and tourists will reach the Peninsula thanks to a metropolitan rail connection, entering a plaza totally covered by a glass structure with a height of 24 meters.

The project covers an area of 130,000 square meters and will include a new underground station, a bus station, a theater, a cinema, many shops and a fitness center. There will also be three towers, for offices, residences and a hotel, connected to the City thanks to a new bridge over the Thames.

The entire project calls for the construction of 15,720 residences and 7 new areas: the first large film studio in the center of London; a new district for art and design, schools, offices and parks…

Greenwich Peninsula will be the largest urban regeneration project in London.