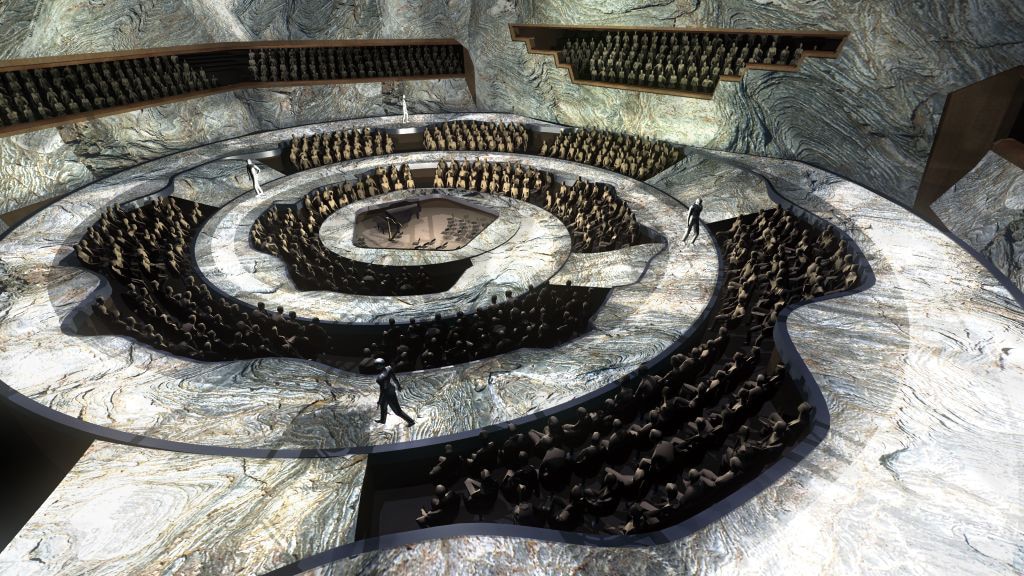 Tuesday 12 May, for the installation Operafood by Valerio Maria Ferrari in the courtyard of the University of Milan (until 24 May), the round table “Beyond the Italian Theater, alternative spaces for musical theater” engaged a panel of international experts (architects, theater directors, music and architecture critics) in a discussion on contemporary spaces for musical theater and opera.

Marco De Michelis, professor of Architectural History at IUAV Venice and curator of national and international exhibitions, was the moderator, with Daniele Abbado (director of opera, theater and television), Guy Cherqui (music and opera critic), Valerio Maria Ferrari (architect, founder of Vmcf Atelier and creator of the installation Operafood, presenting a new concept for Visual Music Facilities at the event Energy for Creativity of the magazine Interni).

The round table Beyond the Italian Theater focused on the theme of alternative musical theater spaces, represented by the project VMFT, Visual Music Facilities Theater.

In the 20th century the notion of architecture for musical theater has been excluded in favor of a simple stage, a versatile space that can adapt to a range of different needs. Can architecture invent a new theater typology after 400 years of the Italian theater tradition? Is it possible to find a new spatial typology offering alternative ways of listening and watching? What are the parameters of the new digital generations with which to come to terms?

One answer to these questions was provided precisely by the installation Operafood, representing – on a smaller scale – the project Visual Music Facilities Theater (VMFT), a new spatial concept for musical theater in which theater, philosophy and architecture converge, developed by Valerio Maria Ferrari over a span of twenty years. A large red wrapper (clad in Barrisol, 7×3.5x5m) contained the wooden model of the Visual Music Facilities Theater, where the audience could interactively trigger five videos.

These were short virtual stagings of Italian opera in scenes involving food, wine and the pleasures of the table, in reference to EXPO 2015: Don Giovanni (Mozart), Traviata (Verdi), Tosca (Puccini), Cenerentola (Rossini) and Belfagor (Respighi).