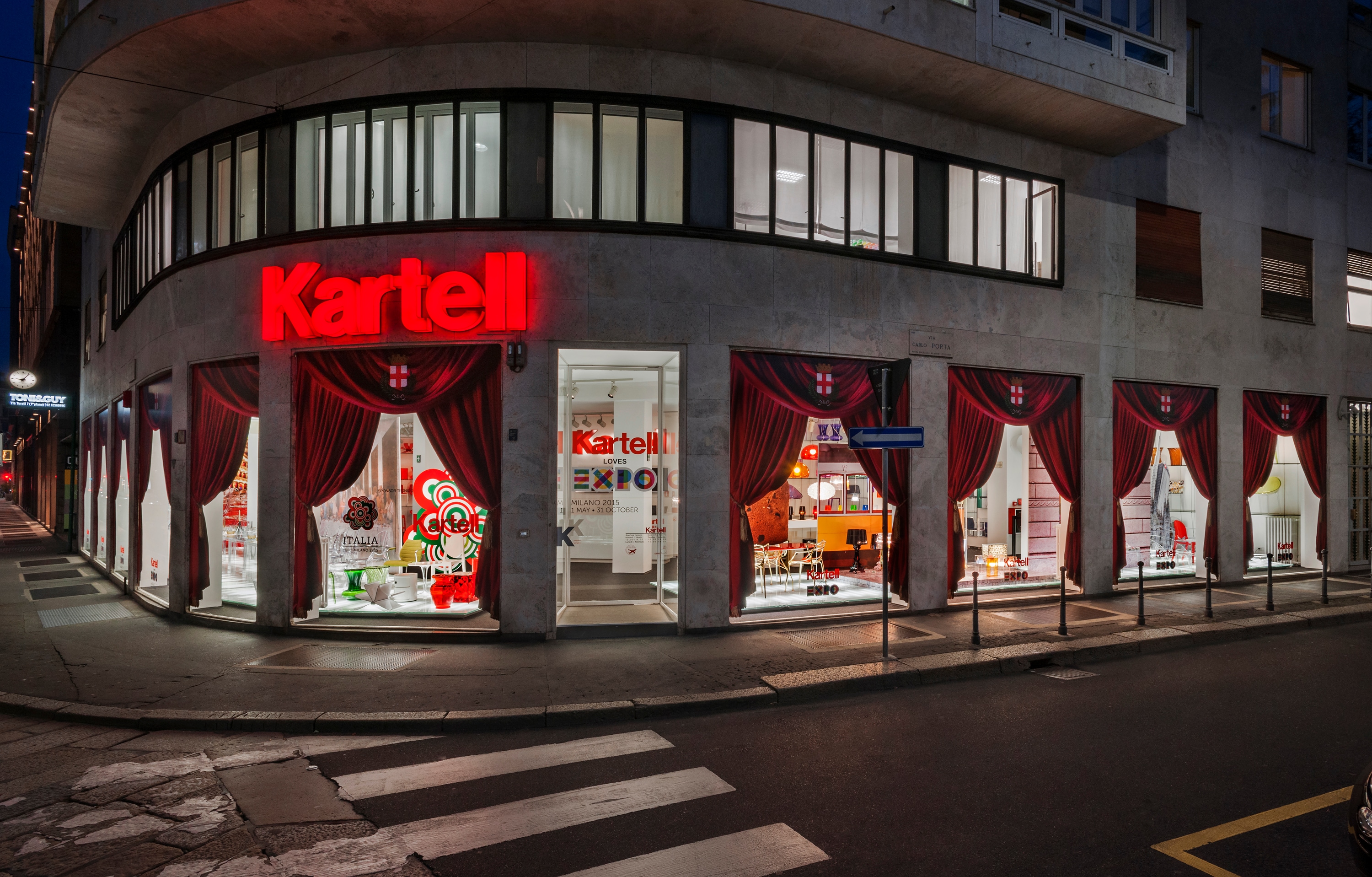 Design Made in Milan by Kartell

Design Made in Milan by Kartell

Kartell begins its Expo Milano 2015 program with a series of initiatives and events at the flagship store on Via Turati, at the completely renovated Museo Kartell, in the city and at the Expo site, with exceptional collaborations and partnerships.

Kartell raises the curtain on a special display for its flagship store on Via Turati in Milan, for Expo Milano 2015. The ten large windows are organized like spectacular stages with ironic red velvet adhesives. Each curtain opens to reveal a protagonist/icon of the city of Milan, reinterpreted and matched with Kartell products in an original way.

Starting with the concept of innovation, Kartell has updated its corporate museum at Noviglio (at the gates of Milan – winner of the Premio Guggenheim Impresa e Cultura in 2000), in a complete renovation now featuring narrative routes through the history of the company and its products, underlining the strategic features of each of the brand’s growth phases.

In a dialogue with the city and the cultural system of Milan, Kartell has created a partnership with the City of Milan, Department of Culture, offering Palazzo Reale a furnishings project that completes the installations of some of the most important exhibitions on the calendar. To furnish the Sala delle Cariatidi and the Sala delle Otto Colonne, Kartell has also offered a permanent donation of seats and tables for Palazzo Reale.

The initiatives involving Kartell at the Expo site are many. As an Official Supplier of Expo Milano 2015 the company has created one of the outdoor areas known as Hortus, where visitors can take a break and relax. The Top Top tables and the Lizz and Ami Ami chairs blend into the green area at the intersection of the two main streets of the Expo site.

Besides many installation inside the individual pavilions of participating countries that have chosen Kartell furnishings, the company is also involved in some important projects.

As technical partner of Padiglione Italia, Kartell has furnished the office of Diana Bracco, President of Expo 2015 s.p.a. and General Section Commissioner for Padiglione Italia, as well as the Peck Restaurant on the fourth floor that offers a marvelous view of Piazza Italia and the Albero della Vita.

Always a partner of Eataly starting with the first store in New York, Kartell has developed exclusive products and layouts for the big Eataly space at the site of Expo Milano 2015. 8000 square meters of products, narrating the specificities of Italian food.

After the collaboration launched last year between Kartell and Davide Oldani for the “Kartell in Tavola” collection, that has led to the I.D.Ish by D’O line of dishes personally designed by the chef, for Expo the encounter continues with the kiosk of the Davide Oldani Caffè next to Padiglione Zero.

The shop windows of all the Kartell Flagship Store in the world will promote the Expo with its themes and programs.