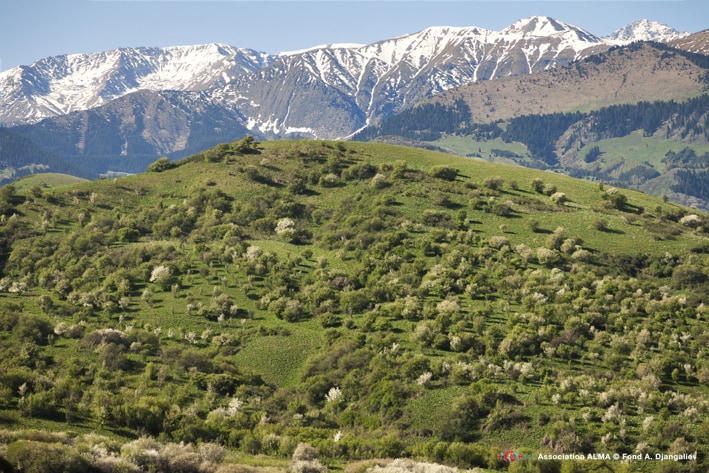 The forests of wild apple trees of Tien Shan

The forests of wild apple trees of Tien Shan

From the west of China, through the north of Kyrgyzstan and Uzbekistan, to the south of Kazakhstan, wild apple trees grow, to such an extent that they have given the name to the ancient capital of Kazakhstan, Almaty, namely the “place of apples.”

The Committee of Experts of Fondazione Benetton Studi Ricerche has decided to devote the campaign of study of the XXVII edition of the Carlo Scarpa International Prize for Gardens to this system of forests and the problematic issues of these sites, in a fragile balance with human activities and culture, bearing precious witness to cultural biodiversity,

These are forests that caught the attention of Aymak Djangaliev (1913-2009), who between 1930 and 1990 was the first to study of the Kazakh population of Malus sieversii and its protection. Since 2010 the association Alma – especially through the work of Catherine Peix and Tatiana Salova, the scientist’s widow – has worked to raise awareness in local government and the international community, to spread knowledge and to preserve the forests of wild apple trees and the memory of Aymak Djangaliev .

In Treviso the headquarters of the Benetton Research Foundation will be open to the public on Friday 13 and Saturday 14 May, for an exhibition, a public seminar and publication of a dossier dedicated on the “Forests of wild apple trees of Tien Shan.” At the Municipal Theater of the same city, there will be a ceremony of consignment of the seal designed by Carlo Scarpa (1906-1978), the inventor of gardens for whom the Prize is named, to representatives of the apple forest zone.

The campaign will continue with other public initiatives, also on an international level, during the course of the year, particularly in Almaty, the ancient capital of Kazakhstan.