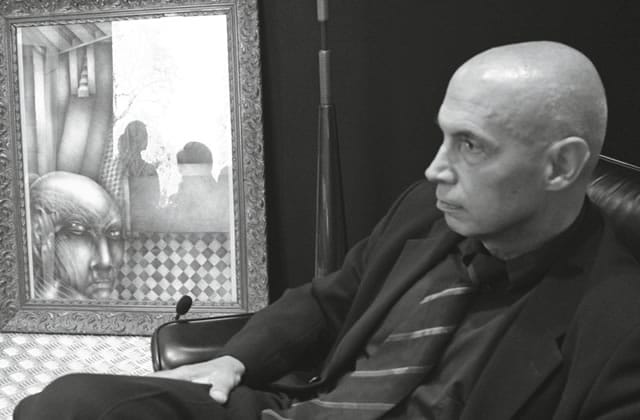 A man of the mountains, deeply tied to Carnia where his family originated and where he seeks refuge whenever possible, Luigi Molinis was born in Udine in 1940, graduated from classical high school, and then moved to Venice to study architecture.

He had the good fortune to meet the painter Mario De Luigi, famous, in his fifties, and they instinctively became friends. De Luigi introduced him to the secrets of painting, and using nails from gondolas he taught him the ‘grattage’ technique with which to remove paint and reach the light. One memorable work was the painted wood floor De Luigi made for the interpretative model of the Roman basilica of Santa Maria degli Angeli, a project young Molinis submitted for an exam with the severe teacher Bruno Zevi, who granted him the adjective “brilliant!”. His thesis advisor was Carlo Scarpa, leading to his degree in 1968, with a thesis on a floating hotel for yachts. The next year he joined the industrial design team of Zanussi, where he was a younger colleague of the likes of Isao Hosoe and Andries Van Onck until 1980. Having left the factory and set out on his own, he worked with great ability at Ceramica Dolomite and, over time, took over Gino Valle’s position as design director of Rhoss. Molinis is one of the few Italian designers (besides Nizzoli, Sottsass, Zanuso and Bellini, in the past, Pininfarina, the Alto Adige group MM Design and the young Brianzabased Altromodo, today) to establish a real dialogue with the industrial dimension. Curated by Marco Minuz and Ivo Boscariol, organized by the Culture Department of the City of Pordenone, the exhibition is from 18 June to 28 August 2011 at the new Gallery of Modern and Contemporary Art of Pordenone named for Armando Pizzinato. The curators, for the first time, have organized the fascinating output of Molinis, including the very beautiful illustrated panels and drawings of products and works of architecture, colored by hand, in large formats. The exhibition sheds light on the range of the works and the incessant mediation between the galaxy of his mind and a painstaking capacity to create, in spite of digressions, an outstanding quantity of works, spaces and things. All without big structures, hordes of staffers, students and interns. There is no difference, in all this, between his free drawings of underwater argonauts or cities of the future, and his industrious drawings of televisions and ventilators, washstands and water heaters. They are all products of patience, made by hand, in long hours of solitary effort. The ideas emerge from his hand, and after the unavoidable encounter with skeptical technicians and marketing men – and fortunately also with some enlightened, courageous entrepreneurs – they are translated into products that almost always convey new languages, breakthroughs, insights. Molinis is a man steeped in the classical, yet he seems to flee from it in works and words: “I have an irresistible desire to make something that doesn’t yet exist. My work borders on heresy and I am an unintentional heretic, without presumption”. To be honest, the significant objects designed by Luigi Clemente Molinis are about thirty in number, at best. But they are all dense with meaning, starting with his early works: the series of round television sets for Seleco, that triggered the name of the show: “No doilies on the TV”. Hitting the market in the year man landed on the moon, his television sets, with their round, eye-like form, attempted an escape from the yoke of the squared, wooden appliances of the past. The Ebla series of bath fixtures, the tub, washstands and bath accessories produced by Ceramica Dolomite starting in 1987 predicted trends in proportions and rectangles that would emerge ten years later. But his most successful project is probably the Brio fan coil unit made by Rhoss in 1993. The existing machines of this type, at the time, were angular and colorless. Molinis began by rounding the edges, giving the boring box a more graceful look; then, instead of adding the usual grille with hostile blades, he designed one composed of seven plastic tubes that bring a sense of fluidity; finally, with a painter’s touch, he inserted the joy of color, lightening up the usual gray gloom of cooling devices. Among more recent works, the Medusa radiator designed for Irsap is very intriguing: a circle with a wide grid hung on the wall, directly based on the image of a sieve. Everything – objects, houses, furnishings – is first drawn and colored by hand, with the mixed expertise of an architect and a painter. In the long pauses away from industry, his restless spirit creates narratives and comics, illustrations for Linus and Humor Graphic, poetry and large oil paintings. Apart from quantities, what counts in the work of Molinis are the vastness of his path, his freedom of thought, his compositional precision, narrative force, and the sense of wonder – and restlessness, at times – his work instills. Gifts that have made him a reference point for the many young people who take his design and architecture courses at the Dept. of Engineering of the University of Udine, and for all those who want to explore the mental and materic paths of expression of artistic talent.