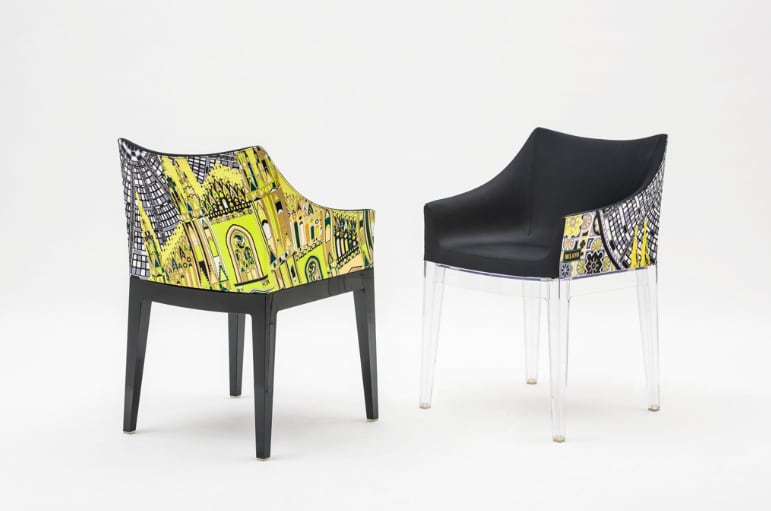 To celebrate Expo 2015, the Kartell Flagship Store in Milan hosts a unique installation to launch the limited edition of the Madame-World of Emilio Pucci Limited Edition chair, dedicated to the city of Milan.

Kartell and Emilio Pucci seal their partnership with an original version of Madame, the padded chair designed by Philippe Starck, this time honoring the city of Milan and two of its most famous architectural gems: the Duomo and Galleria Vittorio Emanuele II.

The result is Madame Milano, a new protagonist of the collection of Kartell and Emilio Pucci, with great charisma, another way to underline the strong ties of belonging to the territory.

A traveling project of Kartell and Emilio Pucci with the Madame model, starting in Milan during the Salone del Mobile 2015, and then seen in New York for ICFF, before returning to its starting point to celebrate Expo Milano 2015.

Madame Milano is part of the Cities of the World project of Emilio Pucci, the special collection of limited-edition scarves as tributes to the cities in the world, described like personal stories painted on modern postcards.

Each city has its own original chromatic tone. The prints reproduced on the Madame-World of Emilio Pucci Limited Edition chair offer a stylized look at the architecture, landscapes and particulars of these leading cities, in a virtual voyage through color and design.

The new version of Madame-World of Emilio Pucci Limited Edition for Milan joins four other models, depicting Piazza di Spagna in Rome, the skyscrapers of New York, Avenue Montaigne in Paris and the Shanghai skyline.