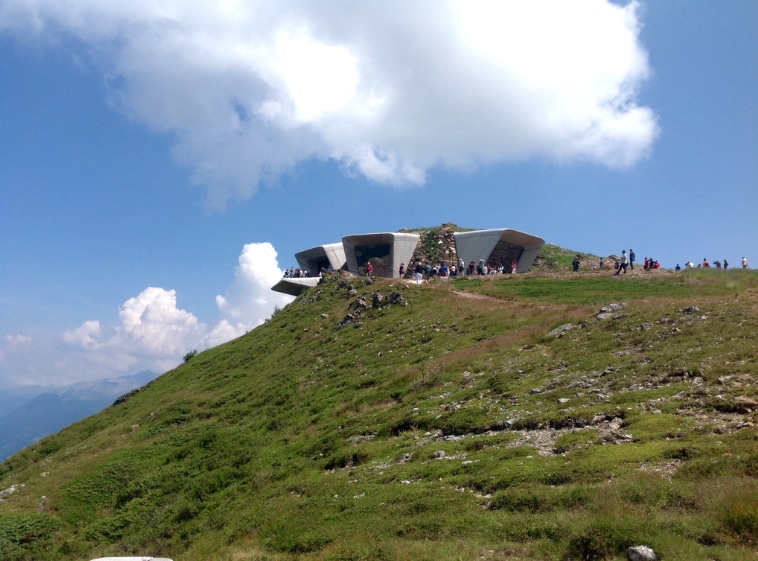 When the blue drape (an exclusive Loden, 150 cm wide, 350 meters long, produced by Lanificio Moessmer) falls, the sixth Messner Mountain Museum is revealed in all its splendor.

MMM Corones, whose central theme is traditional mountain climbing, designed by Zaha Hadid, the architect famous for abolishing the hegemony of the right angle, opened on 24 July.

The main material is concrete, used to create geometric forms bordering on the impossible. The complexity of the design was matched by the difficulty of the working conditions: every piece of the new museum had to be transported by truck to an altitude of 2275 meters, and the work on the mountain was often interrupted due to the weather conditions.

All the efforts have paid off, though, and today MMM Plan De Corones is a reality that makes this ski resort into a year-round tourist attraction.

Inside MMM Corones, Reinhold Messner narrates the development of modern mountaineering, the equipment and the improvements over 250 years, the triumphs and tragedies on the most famous mountains in the world (Matterhorn, Cerro Torre, K2).

MMM Corones is open every day from 10.00 to 16.00, starting on the first Sunday in June, until the second Sunday of October (to match the hours of the cableways). The museum can be reached from the cableway or on foot during a mountain hike. The supreme discipline of mountaineering and the great faces are the central themes of the museum, illustrated in collections, images and unique objects Reinhold Messner has put together during the course of his adventurous life.