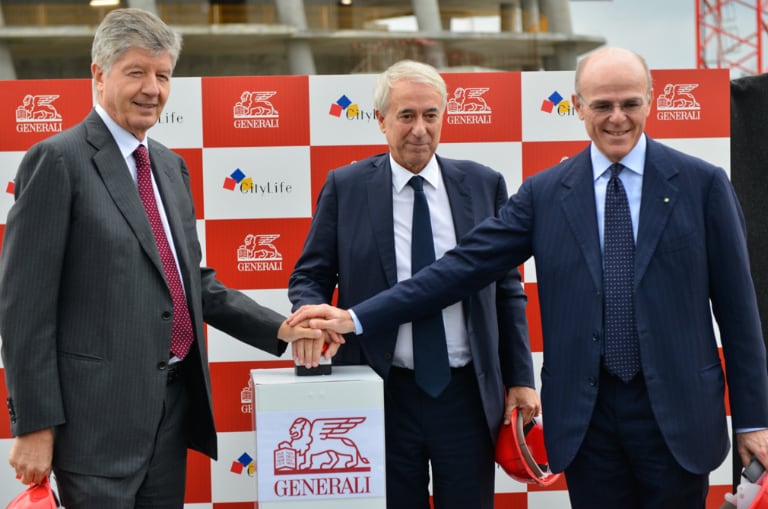 Presentation at CityLife of the Generali tower

Presentation at CityLife of the Generali tower

On the morning of 15 October, at CityLife, a ceremony was held to present the Generali tower and the logo of the Generali company placed at the top of the skyscraper designed by the British architect Zaha Hadid.

The presence of the Lion symbol demonstrates the importance of the CityLife project for Gruppo Generali, and the logo will be visible on the tower, accompanying the ascent to the top of the building which, once completed, will reach a height of 170 meters.

Torre Generali, designed by the studio Zaha Hadid Architects, will be completed in 2017. The building will have 44 levels, with an overall height of 170 meters. The tower is the second to be built of the three towers of the CityLife Business & Shopping District, the heart of the CityLife project, together with Torre Allianz, designed by Arata Isozaki with Andrea Maffei, and Torre Libeskind, where excavation began in February 2015, and the foundations are now being completed.

The facade of the tower, with an area of 15,000 sq meters, will be made with a dual skin system to provide the aesthetic effect of twisting of the outer layer, while offering maximum energy efficiency for the inner layer. This facade system, combined with a cold beam climate control system, guarantees high levels of energy performance and comfort.

Torre Generali has already obtained, like the other two towers, LEED™ pre-certification with the GOLD rating, responding to parameters of environmental sustainability specified by the international LEED™ standards. The achievement of this certification confirms the commitment of CityLife to the highest profile of environmental protection, in keeping with the goal of creating an entire district that respects the planet.

Since the end of March Torre Generali has been visible above ground level, and at the moment the construction has reached the 14th floor, and the 17th level of the core; work proceeds at the pace of one floor per week, for an average of 4 floors per month. Completion is slated for 2017.