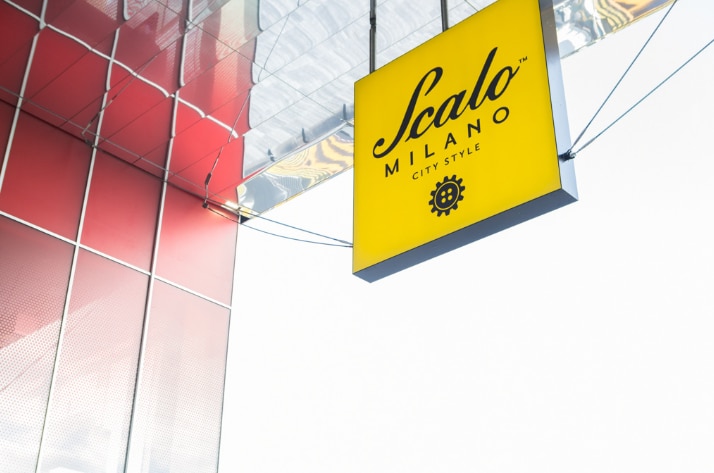 About 6 months after the opening of Scalo Milano, the first Italian shopping district, opened at the end of October 2016 at Locate di Triulzi, in the southern zone of Milan, we interviewed Filippo Maffioli (CEO of Promos, the company specializing in the promotion and management of real estate and commercial investments), who together with his family has created the project of territorial renewal and infrastructural improvement that has made this new “city style district” into a place where the best of Italian and international design can be seen alongside fashion, good food and art.

Is it possible to make an initial assessment, six months after the opening of Scalo Milano?

Yes, and it is absolutely positive. The shopping experience we offer has met with great enthusiasm among customers: attracted and intrigued by a new format that for the first time in Italy presents an innovative mixture that covers fashion, food and design.

The Design District is the true feather in Scalo Milano’s cap. For the first time in Europe and in Italy, it is a location inside a retail space that offers only the best of design Made in Italy: 22 of the best-known brands, a veritable design hub in which to get inspired by a wide range of aesthetic input, a place of infectious creativity.

The architectural concept is based on old Milanese factories: why this choice?

Scalo Milano stands on a former industrial area that once hosted the historic Saiwa factory. This is why we decided to grant continuity to the tradition of the place and its industrial architecture, but in a modern way. Visiting the center you find yourself in an urban environment in which the buildings, arranged along streets and squares as in a real urban district, have volumes based on those of factories, a symbol of productivity and an emblem of Milanese entrepreneurial activity in the last century, but with contemporary facades and avant-garde solutions and materials. From glass (transparent and colored with back-painting, for an overall area of 19,000 square meters) to reflecting surfaces and steel, representing the dynamic spirit of the city and playing with the reflections of natural daylight, while enhancing the luminosity of the shop windows in the evening.

Design, Fashion and Food, three fortes of Made in Italy, all in one place: how many brands are presently included, and how many will be joining the initiative in the near future?

Scalo Milano has been conceived to perfectly combine these three factors in an all-around experience. Today there are over 100 stores in a total shopping area of 30,000 square meters (on a single level, with the exception of the Food Court, organized as an arena recessed below street level), but over the next two years – 2018/2019 – further expansions are planned, to bring the number to over 250 stores.

But we shouldn’t forget that there is a fourth factor: art. There are now four spaces, for an overall area of 2000 square meters, devoted to the project Scalo Arte, which for the first time brings contemporary art in all its forms – from site-specific installations to performances, photography to street art – into a shopping mall, adding unusual cultural and entertainment appeal.

Let’s talk numbers: how many jobs have been created and will be created by this new global village of shopping? How many visitors have arrived, to date, and how many are estimated for the future?

Scalo Milano has thus far created 1500 new jobs. This number is destined to grow over the next two years, with the expansion of the district.

Where visitors are concerned, we have the advantage of being in one of the most densely populated zones of Italy, with a high level of prosperity, so we have the goal of involving not only residents in a range of 30-90 minutes (1.9 million at 30 minutes/ 7.3 million in 60 minutes/12.2 million in 90 minutes) but also tourists visiting Milan and its province, aided by the ease of reaching Scalo Milano from the city center (with the suburban S13 rail bypass and by car on Via Ripamonti, exit 8 of the Tangenziale Ovest A50, and SS 412 Val Tidone). The estimate for 2017 is to reach a level of about 3 million visitors.

Are services already in place, or planned, for tourists from around the world who want to discover and purchase the Made in Italy offered by Scalo Milano?

For us, tourists are very important, especially in the medium-high range of the market that is interested in the offerings of the Design District: a demanding traveler, looking for internationally famous brands.

We have activated a tax free service for them, which permits effective reduction of prices by about 12%, and thanks to the partnership with Global Tourist Service, we provide national and international shipping, transport of baggage to and from airports, or delivery of purchases to hotels. All this makes shopping easier and simpler.

Another benefit we offer tourists is the “I Visit Card,” a free card valid for 24 hours, with which to take advantage of further discounts up to 10% offered by participating stores.

Scalo Milano is a design community that brings together the best on an Italian and international level: what are the initiatives and events planned for the upcoming Design Week in Milan, from 3 to 9 April?

Since we host the first European Design District, we cannot fail to take part in Milan Design Week, with a series of initiatives both at Scalo Milano and in the city. First of all, we are coordinating an installation in the garden of the Milan headquarters of the Fondazione dell’Ordine degli Architetti di Milano (Via Solferino 19), in a special setting created by some of the companies that are part of Scalo Milano, like Calligaris, Kartell, Vitra and Tisettanta: a place open to the public that will host events and offer a relaxation area during the days of the Salone del Mobile.

On Wednesday 5 April, in the same location, the studio Metrogramma presents the innovative architectural layout of Scalo Milano inside the conference “S.MALL: small or large, new architectural solutions for suburban shopping.” The collaboration between Scalo Milano and this association of architects continues after Design Week, thanks to an agreement that will bring important incentives and services for professionals who are part of the association.

From 3 to 9 April, the project Scalo Design Station will transform the districts of Brera, Tortona and Lambrate into “Unconventional Lounges”: urban relaxation areas furnished with comfortable yellow seating, made available to the design community.

In parallel, Scalo Milano will also be hosting a series of interesting initiatives.

It begins on Friday 7 April, at 17.00, with Saturnino, the bassists and composer who will narrate his relationship with design through the bass, from custom instruments to his line of eyewear.

On Saturday 8 April at 16.00 there will be the talk “Print your own shoes” by Mark Beccaloni, a young industrial designer who has recently created a footwear line made entirely with 3D printing, while at 18.00 the encounter is with ‘comehome,’ the popular social eating app. The creators of the app will discuss how design is connected with food and its events.

One of the most intriguing events is on Sunday 9 April, at 16.00, namely the workshop of the association Scuola di Robotica for families and kids, using the LEGO Mindstorms Kit to illustrate the passages that lead from the design to the production of a robot.

Finally, the last appointment of this lively week will be the big party at Scalo Milano, slated for Sunday evening 9 April, from 18.00 to 22.00, organized by Il Giardino dei Visionari.