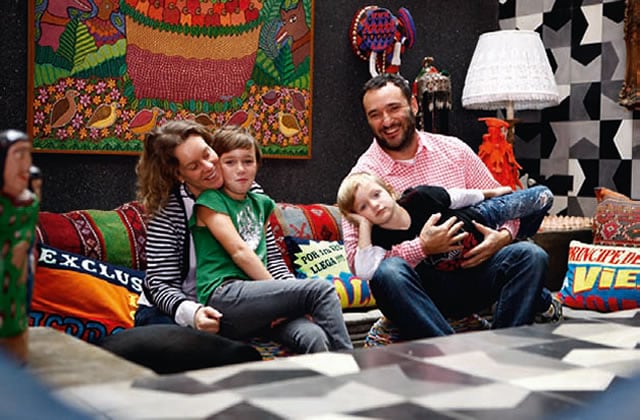 The world of Marcelo Rosenbaum

The world of Marcelo Rosenbaum

The well-known designer from São Paulo lives in a house filled with objects that tell stories: modern vintage and signature design, alongside found objects and items by local and native artists. A mixture of identities and cultures that describes his vision of the ‘Brazilian way’.

The home is the mirror of a way of being. It reflects interests, expectations, habits. The home of Marcelo Rosenbaum in São Paulo represents the soul of his design path, crystallizing it more than any single work. Constructed on a building from the Sixties, it maintains the original patio structure and walls, adapting the place to new uses. It is simultaneously an everyday home and a weekend getaway, when the spaces are invaded by friends and relatives. The 460 sq meters contain two domestic identities: the ‘normal’ one with bedrooms, a more intimate living area and a functional kitchen, and the part for socializing. The latter includes the swimming pool inserted in the original courtyard, the tree house in the garden – a childhood dream of Marcelo, now made for his two children – and the second kitchen, on the ground floor, with a big dining table, interpreted as a churrascaria. Dwelling is what Rosenbaum seeks in his work, behind physical space, beyond the mere aesthetics of objects. For two decades the Brazilian designer has been constantly pursuing a concept of useful design. Seen as construction of a bridge between needy and affluent communities, or the creation of lucrative activities for the native community, helping to conserve forms of know-how that are being lost in modern consumer society. Rosenbaum explores cultural diversity as a driving force of creativity, examining what happens through direct contact between ‘high’ culture and folk culture. This is evident in his house: chairs by Vico Magistretti are clad with local craft fabrics, fine carpets and international design seating are juxtaposed with humble finishes. A wall in the living area is covered with salvaged wood from the colonial houses of the late 19th century in southern Brazil. Dwellings of Italian and Polish immigrants, replaced by houses in reinforced concrete. Rosenbaum has collected modern vintage pieces for twenty years, because it is part of his imaginary, his background. With his first paycheck as a designer he bought the Tizio lamp by Artemide. The objects he has designed are scattered throughout the rooms of the house, mingling with vases and other things bought from craftsmen or found in flea markets around the world. The contrast underscores a collective theme: the history of international design and the unique products of local craftsmen narrate the same need of people to live better, adding beauty to their homes. Highly varied objects that share a sense of freedom of choice, the capacity to narrate stories. Like the cushions in the ground floor living area, made by sewing banners from a festival in a Peruvian city, an invitation to a “noche kaliente”. Among the many objets trouvés there are the puppets of the Maracatu, a musical parade originating in Pernambuco, in northern Brazil. Or the black ceramic pots made by the women of Espírito Santo to cook the traditional fish soup. There is also a collection of statuettes of Santo Espedito, the patron of impossible causes, a favorite saint of Rosenbaum. Objects that capture attention, combined in an almost acrobatic aesthetic balance. All this is the ‘Brazilian way’ of Marcelo Rosenbaum. A mixture of episodes and traditions, peoples, religions and cultures, blending in such a variegated way that they construct an identity. And a way of designing that is direct, involving participation, reflecting a shared history that blends with personal memories.