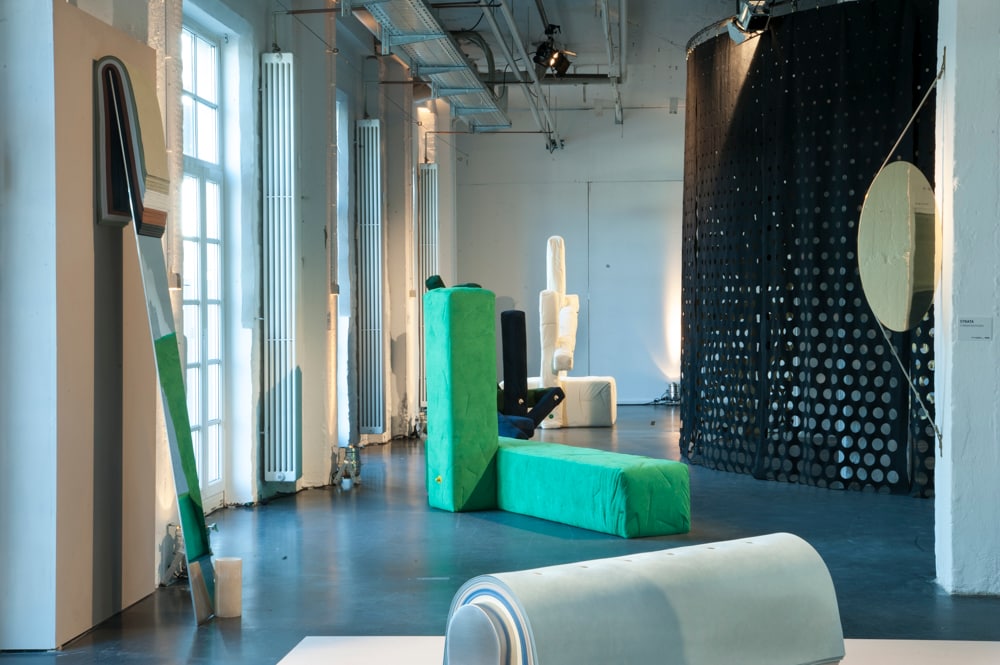 For this special project about tactile qualities and the contemporary, four independent design studios were invited to “experiment” with the material Made in Italy under a registered trademark to create original, surprising installations shown in two different places in Cologne.

The materic narrative of Formafantasma, Moritz Waldemeyer and Anton Alvarez hit the stage in the evocative spaces of the Kunsthaus Rhenania on the Rheinauhafen, a splendid location facing the Rhine and a true hotbed of creativity, while a surprising installation by Henrik Vibskov welcomed the public at the Fair, in an area between Hall 2 and Hall 3.

The Science Spooner, the installation by the eclectic Danish designer Henrik Vibskov, brings to mind a scientific laboratory experiment: inside a sort of rectangular box, bordered by a curtain in Alcantara®, Vibskov placed 15 cones hanging from the ceiling, covered in different shades of green of the material. Moving from above to below thanks to a motorized mechanism, the cones touched their tips on a glass vessel containing water, creating a singular dripping effect. The inner LEDs seen through the holes made in the cones brought discreet, seductive lighting.

The Italian duo Formafantasma, with the project Strata, put the accent on versatility and the strong points of Alcantara®, developing a series of simple elements that suggest different applications for the material, emphasizing the contrast with natural elements like marble, metal and stone. Used as a belt to hold several heavy pieces together, Alcantara® proved its extraordinary strength.

The work by Moritz Waldemeyer for Kayoubi was a refined exercise in technology. The Anglo-German engineer and designer offered an installation composed essentially of lampshades: applying an extra layer of film to a particular perforated version of Alcantara®, Waldemeyer created a texture that combined with light transformed the material into something rich and precious. The resulting effect was of great charm, brought out by the screen surrounding the installation to define a private emotional space.

Finally, the Chilean-Swedish artist Anton Alvarez, in the work New Skids on the Block, played with the variegated color range of Alcantara® to come up with original furnishing complements. Composed of soft poles that have a structure in wood and aluminium covered in foam and completed with Alcantara®, the elements on a human scale seemed “alive,” like bodies wrestling or grabbing at each other.

Andrea Boragno, president of Alcantara, narrated the event: “This event is one of many episodes and demonstrates our major efforts of communication to improve brand awareness (we are gaining excellent results with growth in the USA, China and Japan). We want to show that Alcantara, an extraordinary material that is the result of proprietary technology, can be presented in an infinite range of applications. The liaison with art and design is fundamental, because artists become the interpreters of this material, which stimulates their creativity. In turn, they suggest new business potentialities. These are operations that shed light on the uniqueness of Alcantara as a material and as a brand: the possibility of extreme customization, quality, exclusiveness, the strong emotional component. To which I might add the fundamental element of sustainability