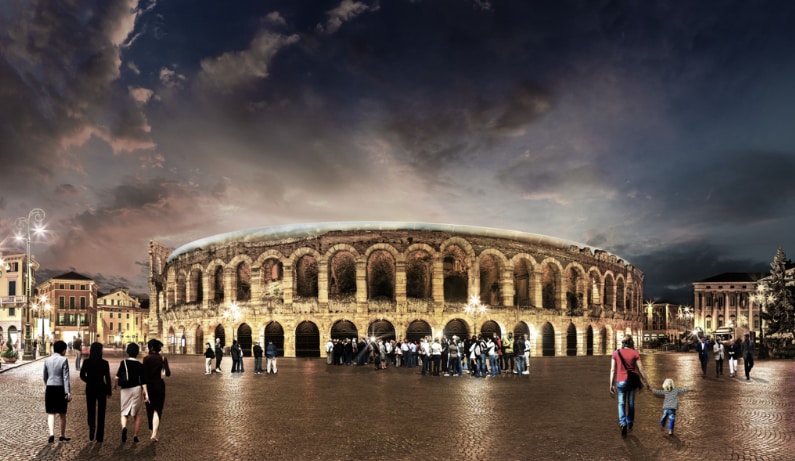 Three winners, 87 submitted projects, five evaluation parameters, 100,000 euros provided by Gruppo Calzedonia. These are the numbers of an international ideas competition for the roofing of the Roman Amphitheater.

The five parameters applied to assess the works were as follows: quality and consistency of the architectural, functional and environmental solution; reversibility and compatibility with the structures of the Arena; compatibility with aspects of safety, security and capacity; the type of materials; the technological component of physical plant systems.

First prize went to SBP and GMP Stuttgart/Berlin (Germany): the solution calls for a perimeter ring resting on the upper edge of the Arena, with which to fasten roofing sheets with a single array of cables, also permitting opening and closing.

Vincenzo Latina (Siracusa) took second prize: the roof would not alter the architectural characteristics of the site, and the structural ring at the top, seen from the inside, suggests the idea of a “summit gate.” The architectural solution is consistent with the structures of the Arena.

Third prize was assigned to Roberto Gianfranco Maria Ventura (Codogno/Lodi): the roof is composed of sheets held in place by cables that can be wrapped in a central ring. The idea is based on the velaria of ancient Roman amphitheaters.