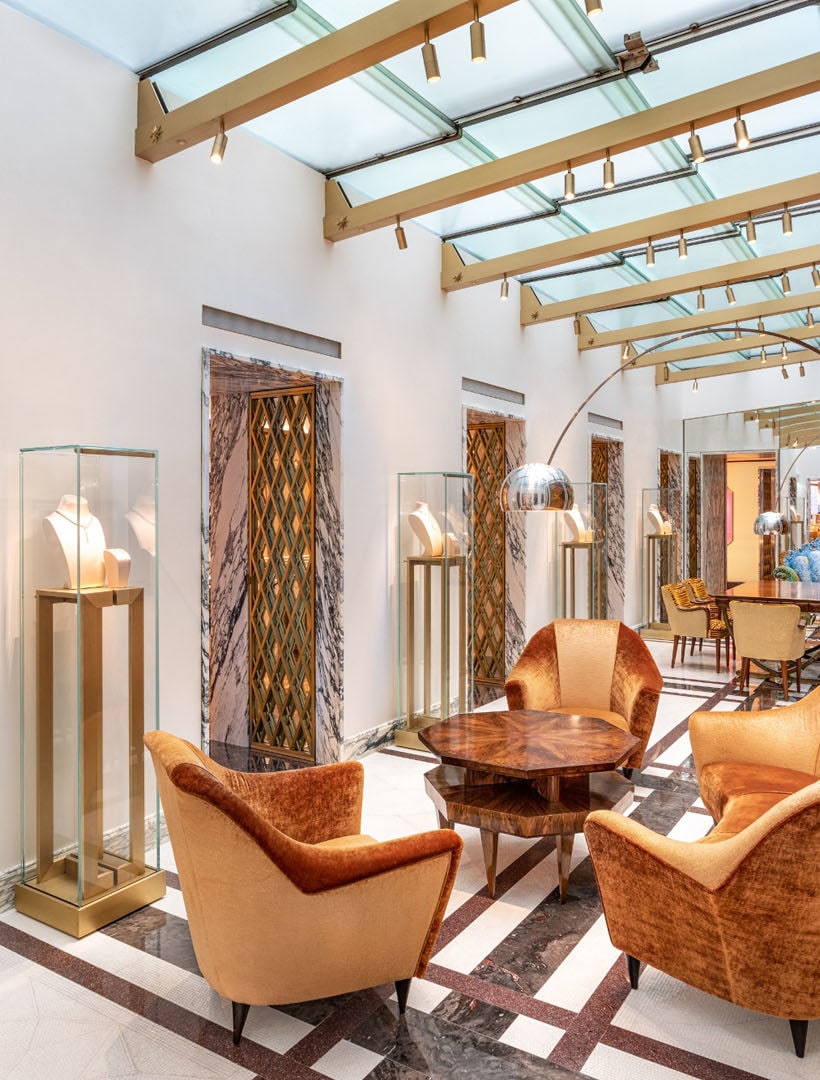 Bulgari reopens its Milan boutique at Via Montenapoleone 2, after a complete renovation.

On a single level – with 280 m2 of retail space – the store has been reinterpreted through a concept created by the eclectic architect Peter Marino that combines innovation, irreverence and tradition.

The large entrance stands out for its impressive marble: white travertine with a geometric motif for the floors, Breccia di Serravezza with book-matched installation to bring out the grain, bordering the doors and indicating passages, as well as the characteristic eight-pointed star in red porphyry set into the floor, as in the lobby of the historic boutique on Via dei Condotti in Rome.

While conserving the inimitable style shared by all Bulgari boutiques around the world, the space on Via Montenapoleone stands out for its clear references to the main figures of Milanese design and architecture of the 1930s, especially the architect Piero Portaluppi.

There are many ties to Villa Necchi Campiglio, the residence in Milan designed by Portaluppi in 1935. As a tribute to the famous villa, the ceilings and the imposing partitions are decorated with a diamond motif that also appears on the facade of the Bulgari boutique on 5th Avenue in New York. The vaulted ceiling is also a clear reminder of the sumptuous style of Portaluppi.

The furnishings also have a clear Milanese tone, including a table by Paolo Buffa, chairs by Ico Parisi, bookcases and tables by Angelo Mangiarotti, the Arco floor lamp by Achille and Pier Giacomo Castiglioni. The display counters at the center of the spaces are freely based on the works of Carlo Scarpa and stand below original chandeliers by Gio Ponti dating back to the 1960s: made for a private client and originally produced for Villa Namazee in Tehran, they are part of a series acquired by Bulgari for the stores in Milan and New York.

The boutique contains a winter garden similar to that of Villa Necchi. Featuring white marble and glass, it is a luminous, rarefied but at the same time enveloping space, with floors in Lasa marble mosaic, grafted onto Bois Jourdan marble and porphyry. One entire wall is clad with a majestic floral installation in bright colors by the Japanese artist Azuma Makoto.