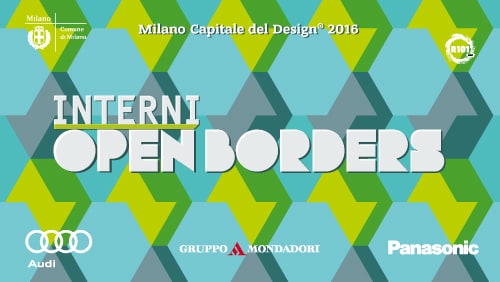 To see all the videos of the Interni events, visit our YouTube channel

The exhibition-event Interni organizes every year during the FuoriSalone reaches its 19th editon in 2016: the magazine gathered internationally acclaimed designers around the theme Open Borders.

A series of interactive installations, macro-objects, micro-constructions and exhibitions to break out of disciplinary boundaries: the theme was developed as an extension of design vision to new synergies and contaminations with different areas of research, including cinema and photography, as well as application of architecture and design in evolving sectors such as those of digital tools, technology and sustainability.

From 11 to 23 April Open Borders presented a series of projects and contributions in three striking urban locations: the Università degli Studi of Milan, the Orto Botanico in Brera and the Audi City Lab at Torre Velasca.

The exhibition “Casetta del Viandante” curated by Marco Ferreri – one of the installations of Interni Open Borders – has been designated as an official exhibition of the XXI Triennale Internazionale di Milano ’21st Century. Design After Design.’

The State University, where “Casetta del Viandante” will be open to the public until 12 September, thus becomes one of the official sites of the 21st Milan Triennale.

In the videos, a selection of interviews with the protagonists (designers and architects) of Open Borders.