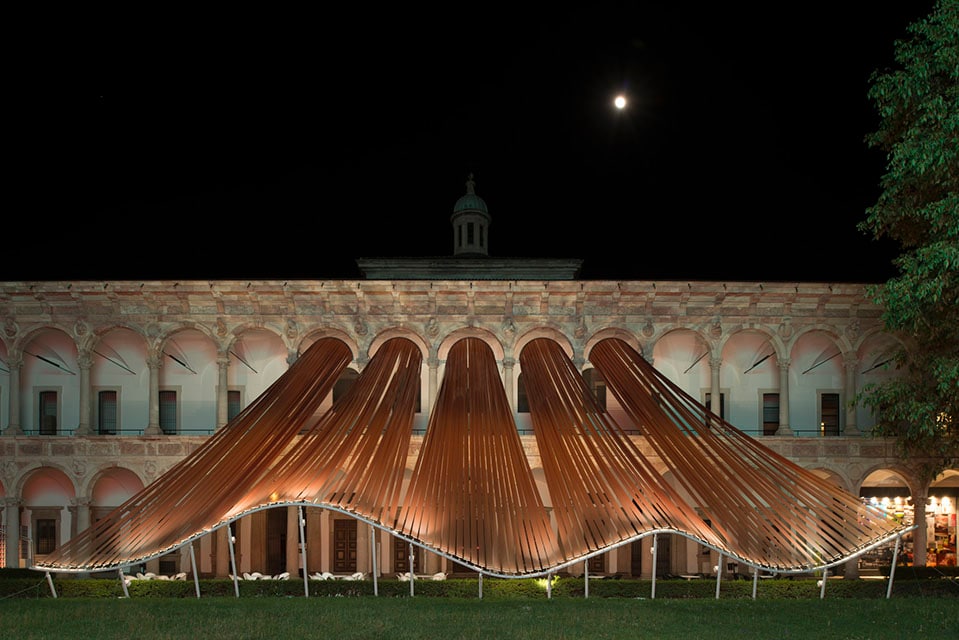 A series of interactive installations, macroobjects, micro-constructions and exhibitions that explored ways of getting beyond disciplinary borders: the subject is addressed as an expansion of design vision to new synergies, to contaminations with different fields of research, such as cinema, art, photography; and as the application of architecture and design to evolving sectors like the digital, technology, research on sustainability.

“Open Borders means no boundaries: it is a concept connected with walking. Walking means following always different trails, finding new surprises. The idea of these little houses comes from observing people, who especially in the spring and summer walk the Via degli Abati in the country near piacenza. Hence the idea of giving these people the chance to find hospitality in keeping with their thoughts. These little houses, placed in the territory near farms, but independent, can also become a minor economic resource, a distributed hotel facility.” Marco Ferreri, architect

“My house of the wayfarer refers to romantic literature on wanderers: inside, there is another even smaller house, an inflatable bed that becomes a house. Interni is open to all ways of thinking about design and is never swayed by the constraints of having to address markets; they try to grasp ideas and communicate them to the audience.” Denis Santachiara, designer

“The Rabbit Chair is just what its name says, a characteristic feature inside the house. It is a product that is a sculptural object, but it is also practical, for sitting. In recent years design has moved towards the art context, because people are demanding, they want something innovative, objects with a strong identity.” Stefano Giovannoni, architect

“Marco Ferreri has combined these two words that have nothing to do with each other: ‘casetta’ – the little house – which is stable, immobile, and ‘viandante’ – the wayfarer – someone who never keeps still. Inside my house I would like to put a little vase for flowers, a blade of grass, because decorating is always a good thing. And I want to put the little drawings that all wayfarers make; but not done on the walls, because that would be too permanent, and things that last too long are no longer wanted today. Because we no longer have room in the world to put things that last forever.” Michele De Lucchi, architect

The exhibition, which will be open until 12 September, is composed of four housing modules in wood designed by Marco Ferreri and produced by Cacciati Costruzioni e Restauri; lighting by Artemide. With the support of Arex, Esa Progetti, De Marinis, d’Officina, Pertinger, Sid.
The interiors of the houses were personalized by the four designers: Il piccolo viandante by Denis Santachiara (with Campeggi, Cyrcus); Rabbit House by Stefano Giovannoni (with Qeeboo); La casetta del viandante by Marco Ferreri (with Billiani, Danese, Magis, A Ferro e Fuoco); Il viandante sei tu? by Michele De Lucchi (with Alessi, illy, Produzione Privata, Artemide).

Project by Patricia Urquiola with Cleaf

“We chose the term ‘fuukei’ because it indicates traditional Japanese landscapes, where low clouds create different thicknesses, over the mountains and the trees. These landscapes permit different levels of interpretation, depth, perspective. For the installation we thought about a large spine, a sort of wall that narrates a landscape: when you walk along it, on both sides you sense this concept of the unfinished; there is the interrelation of different surfaces we have used to construct it, the hybrid between my European viewpoint and influences from other worlds. The installation makes use of the technological capacities of the company in the reproduction of materials. What was not possible has been made possible.” Patricia Urquiola, architect

The installation located in the hall of the Aula Magna was a succession of panels made with surfaces of different consistencies, textures and colors, composed like an abstract landscape. Designed by Patricia Urquiola, Empathic Fuukei was produced with Cleaf, a company specializing in the production of surfaces for the furniture industry.

“To stay open to many influences is part of a certain type of design culture: an idea of openness with the ability to absorb things from other cultures. I believe this is very important, connected with the role of the architect and the designer. The outside of my project is very traditional, it reflects aspects of an almost archaic architecture. The passage between outside and inside is very clear: inside, we find a perfect parallelepiped, almost a ‘Kubrick-like’ feature, both in materic terms and in terms of luminous representation. There is the idea of two poles, different ways of thinking that have to coexist. The dialogue between the two entities is underlined by the materials, different in their image, their origin, their method of installation.” Massimo Iosa Ghini, architect

Produced with Ceramiche Cerdisa, the installation In/Out by the architect Massimo Iosa Ghini in the Cortile d’Onore symbolized the poles between which life moves: chaos and cosmos, individual and community, natural and artificial. The cladding was in batch-dyed porcelain stoneware from the Blackboard and Reden collections of Ceramiche Cerdisa; lighting by iGuzzini.

“The installation Invisible Border is located in one of the most important courtyards in Milan; the idea of the courtyard, in the past, was connected to the concept of the border. In contemporary society we have to open borders. It is important to use certain new materials, because the historic building is very solid, concrete, while now we are talking about openness, we want large spans, light, transparent materials. For the installation we have chosen a material called Etfe, whose color changes from a dense tone to near transparency. We need to create a new type of space, that is added to traditional architecture, where people can talk about the future.” Ma Yansong, architect, founder of the Studio Mad Architects

Project by Ma Yansong - Mad Architects with Ferrarelle “The installation Invisible Border is located in one of the most important courtyards in Milan; the idea of the courtyard, in the past, was connected to the concept of the border. In contemporary society we have to open borders. It is important to use certain new materials, because the historic building is very solid, concrete, while now we are talking about openness, we want large spans, light, transparent materials. For the installation we have chosen a material called Etfe, whose color changes from a dense tone to near transparency. We need to create a new type of space, that is added to traditional architecture, where people can talk about the future.” Ma Yansong, architect, founder of the Studio Mad Architects

“In this project we started with a new material that has the opposite action of a greenhouse. A greenhouse is a system in which solar radiation enters, is captured, and the temperature rises. We have tried to do the opposite: not a greenhouse but a coolhouse, to allow us to cool a volume without using energy. For Open Borders we tried to imagine an open future, particular where climate is concerned, which is fundamental in architecture and design. The climate is changing, so we need to understand how to modify climate without using energy. We did this project together with Transsolar, a German engineering studio, the best when it comes to climate change.” Carlo Ratti, architect and engineer

The installation, based on the collaboration between the studios Carlo Ratti Associati and Transsolar, had the aim of increasing awareness of possible strategies to cope with climate change. It featured three different climate modification options: Greenhouse, Coolhouse and Treehouse. Structures produced by Fgm (Fabrizio Milani), set-up by Kibox.

“Many borders are not necessarily physical barriers: they are the result of zones of disconnection, or are linked to the acoustics of urban spaces. Architecture is not just a way to improve urban space; at times it is also an acceleration of experimentation with unusual spatial qualities. Inside such a strong, solid work of architecture, like the Ca’ Granda in Milan, I decided to work on the theme of experimentation. Radura is a project that acts almost as counterpoint to the typological principle of the courtyard of Filarete, in the sense that it is an internal space inside an internal space; so in the end three spatial situations are created: that of the portico, that of the outer perimeter of the courtyard, and that of the internal clearing. The sound sources measured these three spatial situations. Wood, in this sense, was a fundamental factor.” Stefano Boeri, architect

The installation Radura by Stefano Boeri Architetti, positioned in the Cortile della Farmacia and made entirely in wood, was composed of almost 400 cylindrical columns. DomusGaia, Legnolandia, Fratelli De Infanti, Serrametal, Vidoni, Stolfo, Diemme Legno are the companies of Filiera del Legno Fvg (Consorzio Innova Fvg) of Friuli Venezia Giulia Region that took part in the production. The sound design was by Ferdinando Arnò for Quiet, please!; lighting by MyLed.

“There is a sort of analogy between architectural design and filmmaking: both try to interpret reality. We have chosen a work by Michelangelo Antonioni (La notte) and tried to bring its way of seeing reality into relation with ours. The theme of the mingling of the arts, of being able to make a contaminated project, is very close to our way of designing.” Massimo Formenton, architect

“We chose this scene (Giovanni between presence and absence with Monica Vitti and Marcello Mastroianni) from the film by Antonioni because in our view no one could better interpret the contamination of disciplines. We tried to reconstruct the destabilization of the character between presence and absence through a game of reflections. Furthermore, in Antonioni’s film the indoor-outdoor relationship is never well defined: we too have built a pavilion that is actually a patio, and there is a relationship that continues between inside and outside.” Aldo Parisotto, architect

The installation by Aldo Parisotto and Massimo Formenton, produced with Italcom and Laboratorio Morseletto, interpreted the concept of the room ‘of emptiness’ or ‘of silence’: a space that takes on meaning thanks to one or more presences. The structure in steel (by Eurometal) formed the skeleton for a shell of walls in reflecting glass (by Piavevetro). The LED wall was by Tecnovision, the lights by Light Contract, with video content by Pietro Cremona.

“For me every installation is a work of architecture, so it is part of an experience. At the center of the Cortile d’Onore we placed a tower, which is always the main part of an architectural complex; this is a tower that gives information, also about itself, its own design. It communicates with the people who visit the show and see the various images on the tower. The images move and make people think: ‘What is this tower like?’ There is discussion, a dialogue, an exchange, which is the essence of Open Borders. This is why I think our installation is very clear, it has to do with the integration of people in the dialogue on open borders, a dialogue in which everyone can take part.” Sergei Tchoban, architect

The installation Towers, designed by the Russian architects Tchoban, Kuznetsov and Sterligova and produced by Velko Group, was a cylindrical volume with a height of 12 meters covered by 336 LED panels mounted in a sequence. The panels provided an interactive screen for architectural graphics: visitors could transmit their own drawings on the tower thanks to two workstations at the sides of the courtyard with tablets and styluses.
#News #Open Borders