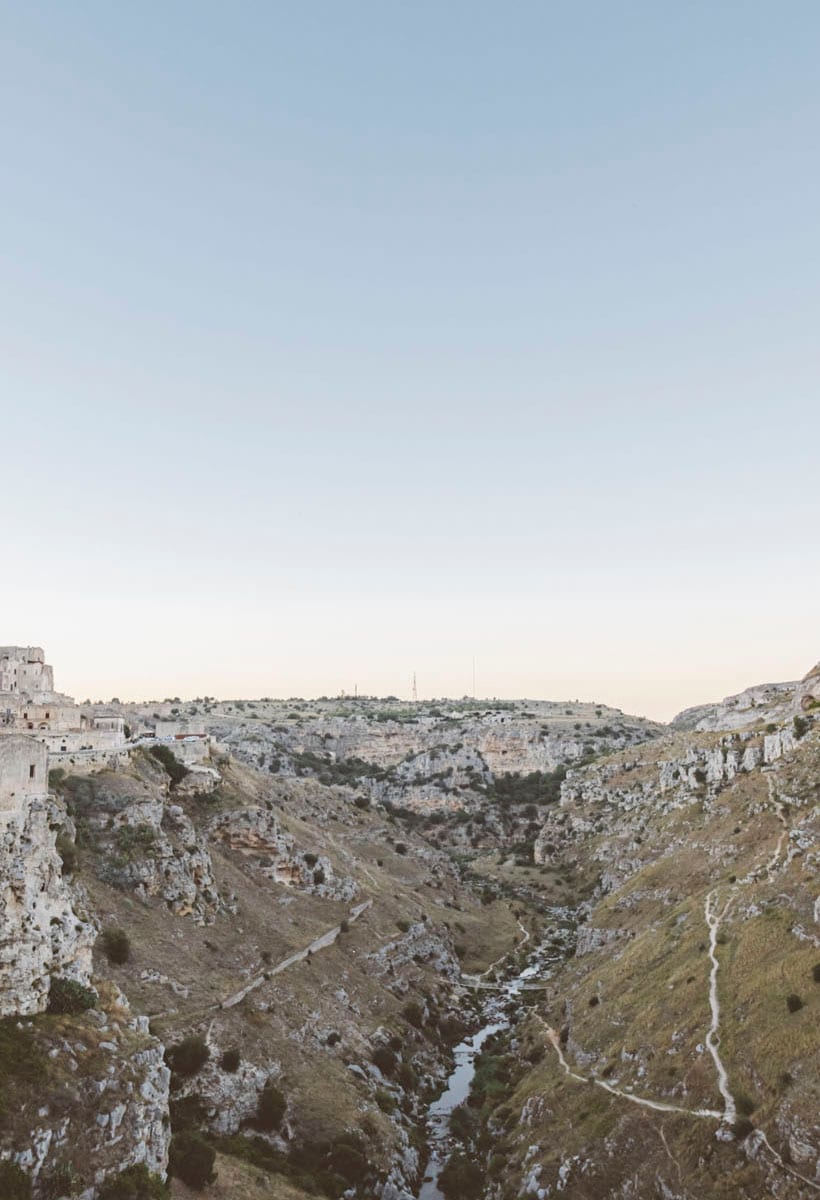 A land beyond time

#arte
A land beyond time
Ancient caverns, cliffside churches and cisterns excavated in the rock are ingredients of the age-old landscape of Matera, a place seemingly immune to modernization. This year the city, as the European Capital of Culture, is the focus of a project of non-constructed architecture based on recovery of existing buildings and ‘forgotten’ spaces

Few people know that every day, at 15.20, a Frecciarossa high-speed train leaves Milan to arrive at 23.03 in Ferrandina, a small station 30 minutes away from Matera by car. Passing Naples and Salerno, the train leaves the coast and is suddenly enveloped by disorienting darkness, unlike the widespread electrical glow of most of the Italian landscape.

Basilicata, together with Val d’Aosta, is the region with the lowest population density, almost one tenth of that of Lombardy. The darkness is striking at night, and the daytime is just as surprising, due to the almost total lack of industrial sheds and one or two-family houses, scattered all over the rest of the peninsula.

From Ferrandina, which like many stations of the Apennines is located in a valley, the road climbs steeply to the Murgia plateau. Unlike other cities in this zone, historic Matera does not stand on a peak, but alongside a ravine hundreds of meters deep, invisible from the new city organized on the plateau above.

While photographs of the Sassi (cave dwellings) are familiar images now, we seldom see shots of the other side of the gorge. Inhabited for thousands of years, this is a wild green area where the main traces of human existence are a network of old caverns, cliffside churches and cisterns excavated in the rock.

For centuries the two sides of Matera - the inhabited center vs. pastures and quarries - have been kept in a sort of balance. Two universes, urban and rural, always seen in terms of antithesis elsewhere, face off in Matera in a single landscape. 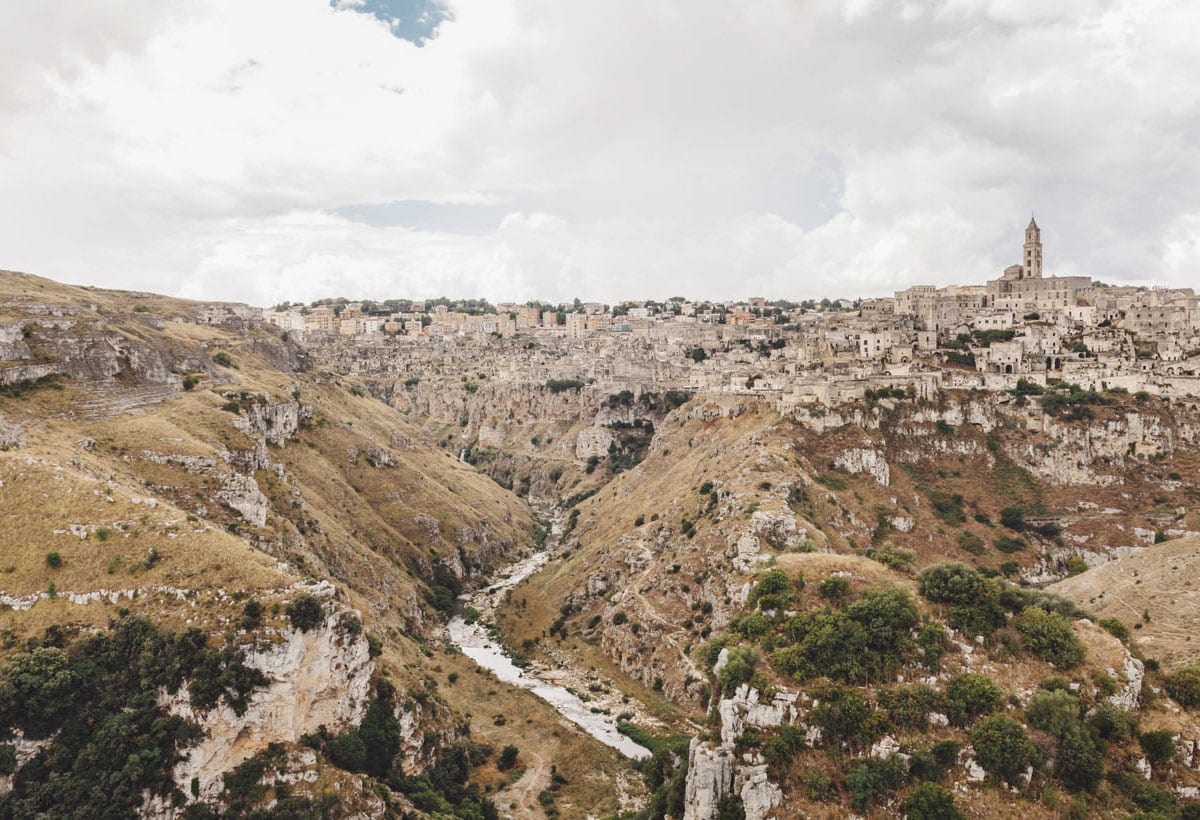 3
The Sassi di Matera seen from the Parco della Murgia. Two universes, urban and rural, that have been seen in antithesis elsewhere, are vertically compressed in a single landscape in Matera./ photo © Pierangelo Laterza

Few other cities have such a strong presence in the natural environment. Considering its special geography, it comes as no surprise that Matera has been selected as European Capital of Culture, thanks to a program that explicitly rejected the idea of new construction. Often this type of appointment becomes an opportunity to build structures and infrastructures with a high architectural profile but uncertain future impact, as in the case of Marseille, Capital of Culture in 2013.

The dossier of Matera’s bid, developed under the artistic direction of Joseph Grima, instead speaks of reuse of existing buildings and recovery of ‘forgotten’ spaces like the stone quarries. Matera 2019 is many things, but it is above all an experiment in the making of architecture without volume.

After all, Matera has a complicated relationship with modern architecture. As we know, starting in 1952, the year of the “special legislation for the regeneration of the Sassi,” the inhabitants of the Sassi were evacuated and moved into the districts of the modern city. In the wake of the success of Christ Stopped at Eboli, which describes the Sassi as a sort of Dante’s Inferno, the government run by Alcide De Gasperi made the modernization of Matera one of its leading initiatives.

Though the experts called upon to analyze the Sassi, and many of their inhabitants as well, urged the option of restructuring the dwellings, the government insisted on the need to move the population, exploiting the negative image of ‘caves’ in a country that was struggling to build itself a modern identity.

The expansion of Matera involved some of the most important Italian architects of the time, like Carlo Aymonino, who designed the Spine Bianche district, and Ludovico Quaroni, creator of the rural settlement of La Martella. The latter, in particular, was an experiment that was only a partial success: in spite of some excellent buildings, like the church of San Vincenzo de’ Paoli, many of the planned public services were never built, and the idealistic vision of recreating the community life of the Sassi remained on paper.

What Carlo Levi and the politicians who came after him hadn’t seen, in their focus on health and hygiene, was that the dwellings in the Sassi constituted a sophisticated system, skillfully inserted in the natural environment. The renovation improved the material conditions of the people of Matera, but at the cost of sweeping away an age-old culture. 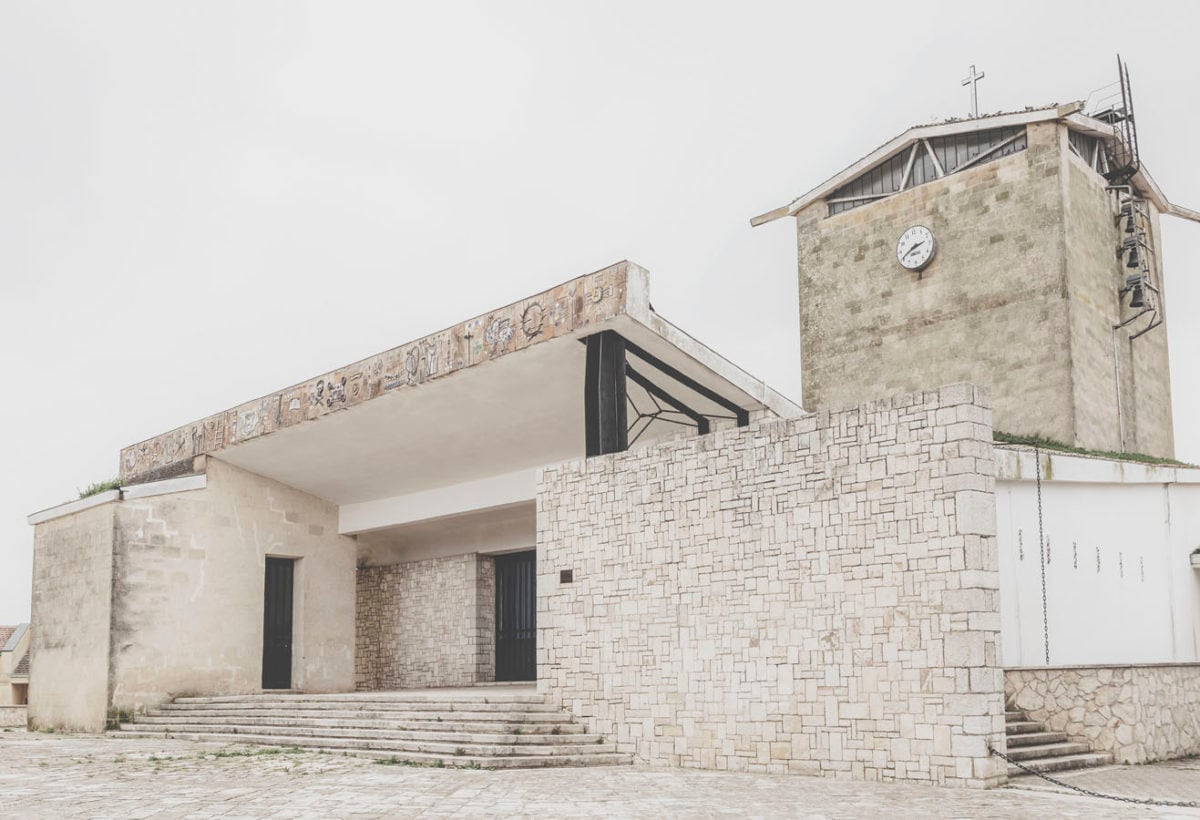 3
The church of San Vincenzo de’ Paoli, consecrated in 1955, stands at the center of the rural settlement of La Martella, 10 km from the center of Matera. Designed by Ludovico Quaroni, with majolica tiles in the baptistery by Piero and Andrea Cascella / © Pierangelo Laterza

The idea of a work of non-constructed architecture lies behind the Open Design School (ODS), one of the main projects of Matera-Basilicata 2019, a community design workshop created by Grima, who has always advocated working ‘from the bottom up’ in the field of design. The aim of ODS, involving the work of almost twenty local and international architects and designers, has been to locally develop all the structures needed for the cultural events of Matera 2019. As the manual collectively written by the participants and placed online explains, ODS openly presents itself as an alternative to classic set-ups, whose making is commissioned to external companies selected in bureaucratic bidding procedures.

The workshop, instead, starts from a THREE+ONE structure created by German designer Lukas Wegwerth as an open-source project, adapting its elements, which are then produced by local companies to meet the various needs. The result is a light system that can be reused, easy to rapidly erect without specific technical know-how, that can serve as an info point, a stage or an exhibition venue.

In another direction, the major exhibition Blind Sensorium: The Paradox of the Anthropocene by Armin Linke, opening on 6 September, also speaks of architecture without volume. From the start of the year the Italian-German photographer has traveled in Basilicata and Apulia to narrate “what you don’t see,” meaning the transformation of the territory caused by human activity, and above all the infrastructures that govern that activity. Linke’s work has moved tirelessly forward for over 20 years, and takes the form of an archive of hundreds of thousands of images, ranging from anonymous corridors in the United Nations building to explorations of the ocean floor.