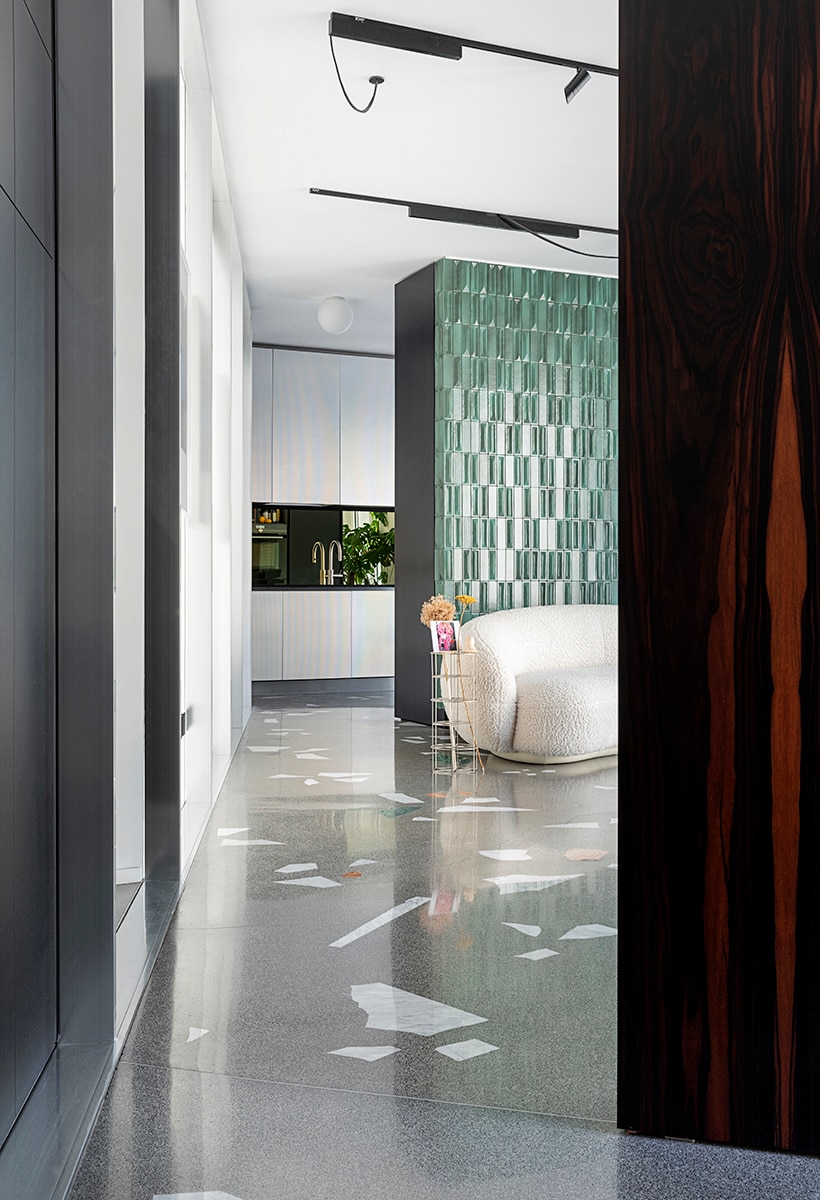 The new home of Francesco Librizzi in Milan, conceived in terms of cinema tracking shots, with a spirit of maximum visibility and openness to the city

He believes we all have the sense of space, even those of us who are not architects, with a bit of maieutic method to bring it out. Be that as it may, the new home Francesco Librizzi, the designer from Palermo based in Milan, has made for himself actually seems like the result of a challenge that would be hard to tackle for anyone who is not schooled in visual perception, without an ability to listen to the location and to interpret it in terms of contemporary lifestyle.


Francesco Librizzi
°
Francesco Librizzi Studio, founded in Milan in 2005, deals with architecture, interiors, exhibition and product design. Its works are focussed on the essential features of space and the way its tectonics are influenced by objects, structures and humans. Finding a balance between new interventions and the existing architectural heritage has been so far the center of the realized projects and the theoretical research of the Studio. Since 2008 Francesco Librizzi cooperates with universities and design academies in Italy and abroad. He currently holds the position of Guest Professor in Interior Architecture at the Master Interior and Living Design at Domus Academy and at the Faculty of Architecture of Genoa.

His belief that “space does not exist, but can be constructed” translates into the transformation of an average-sized domestic interior, with a row of five balconies, into a grand loggia that establishes an intense relationship with the urban stage seen beyond the windowpanes. “A house is not just property, not just a comfort zone, but also an identity,” he says. “When I came across this apartment with an unusual location in a corner building from the 1950s, halfway between the Caiazzo and Centrale stops on the green metro line 2, I immediately understood that my relationship with Milan and architecture would find a direct expression.

Its complex layout, a pentagonal plan between two lateral wings, bending and opening in a convex way to the west, towards the Central Station, the Pirelli tower, the UniCredit skyscraper, the rising city, and in front of Palazzo Montedoria, made it possible to insert a series of projections and urban suggestions, based on tracking shots or angled views.” All this happens with great compositional and spatial freedom, in rooms that become passages for fluid circulation and mixed uses, with an approach to residential design that has been part of the architect’s research for some time. 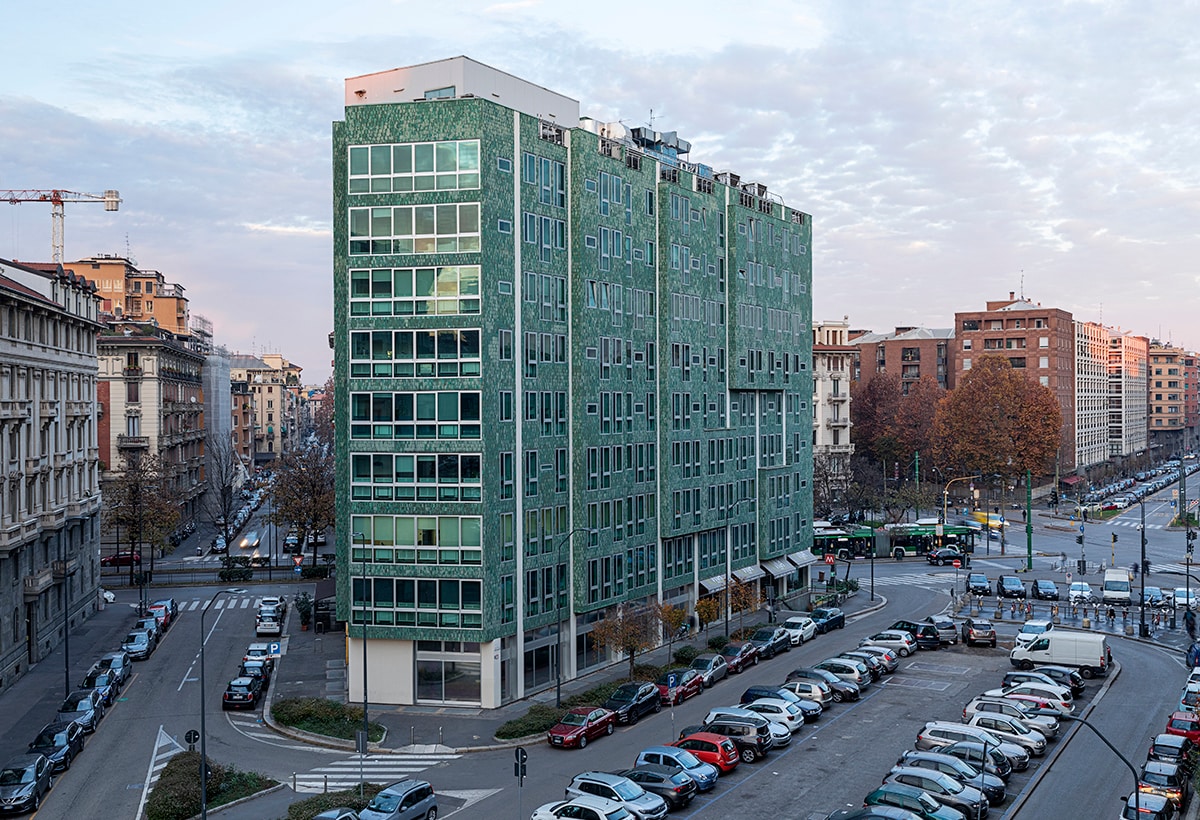 Here too, Librizzi has eliminated barriers, inside an open plan conceived as a continuous screen formed by multiple viewpoints aimed in many directions towards the city, while converging towards the center of gravity of the house, which is the living area. “For me, having a direct focal point on the façade of Palazzo Montedoria, designed by Gio Ponti at the end of the 1960s,” he says, “represented the expression of a synthesis, given the fact that during the period in which I was house hunting, I became the artistic director of FontanaArte, so I was experiencing a deep immersion in the values of the great master in the history of the brand.”

The private project of Librizzi thus becomes a position taken with respect to the city itself. “It is precisely the house-city relationship that makes you into a metropolitan citizen, but also the inhabitant of your own home,” he remarks. The film from a camera, bearing images of what passes before the lens, the sampling of the buildings seen beyond the glass, has been transferred into the design a floor that graphically traces the crossing of the entire apartment, with the way the designer has created ties between the layout of the furnishings and the relationships constructed by every presence, starting with the entrance threshold. “Like a painting and an ideogram – a middle way that is relatively new, for me – this surface, between seminato and palladiana, a grout with constant millimetric dots of black marble, with fragments of multicolored marble, mostly white Carrara, but also green Alpi, red Verona, black Marquinia, forms mutable archipelagos, four islands with different sizes and orientations,” he explains.

“
The close relationship with the Montedoria building has triggered the first space-time “short circuit” to imagine the filmic 24-hour aperture of a city that enters the home and a home that makes the city visible, in a loop of maximum transparency."

The close relationship with the Montedoria building has triggered what the architect defines as the first space-time “short circuit” to imagine the filmic 24-hour aperture of a city that enters the home and a home that makes the city visible, in a loop of maximum transparency. The first element of reference of the space, at the center of the living area, has become a monolith clad in the same clinker tile as Ponti’s building.

“The tiles are made by TeamWork, a company based in Reggio Emilia that specializes in custom creations. This was the final lot, which I was able to salvage while they were restoring the façade of the building in 2012. Seven square meters that trigger an interesting off-scale effect in their interrelation, because the same tiles that look very small on the outside seem very large from the inside.” This first element has then influenced the form and proportioning of the second volume, covered in Macassar ebony, which isolates the studio-library and music zone. 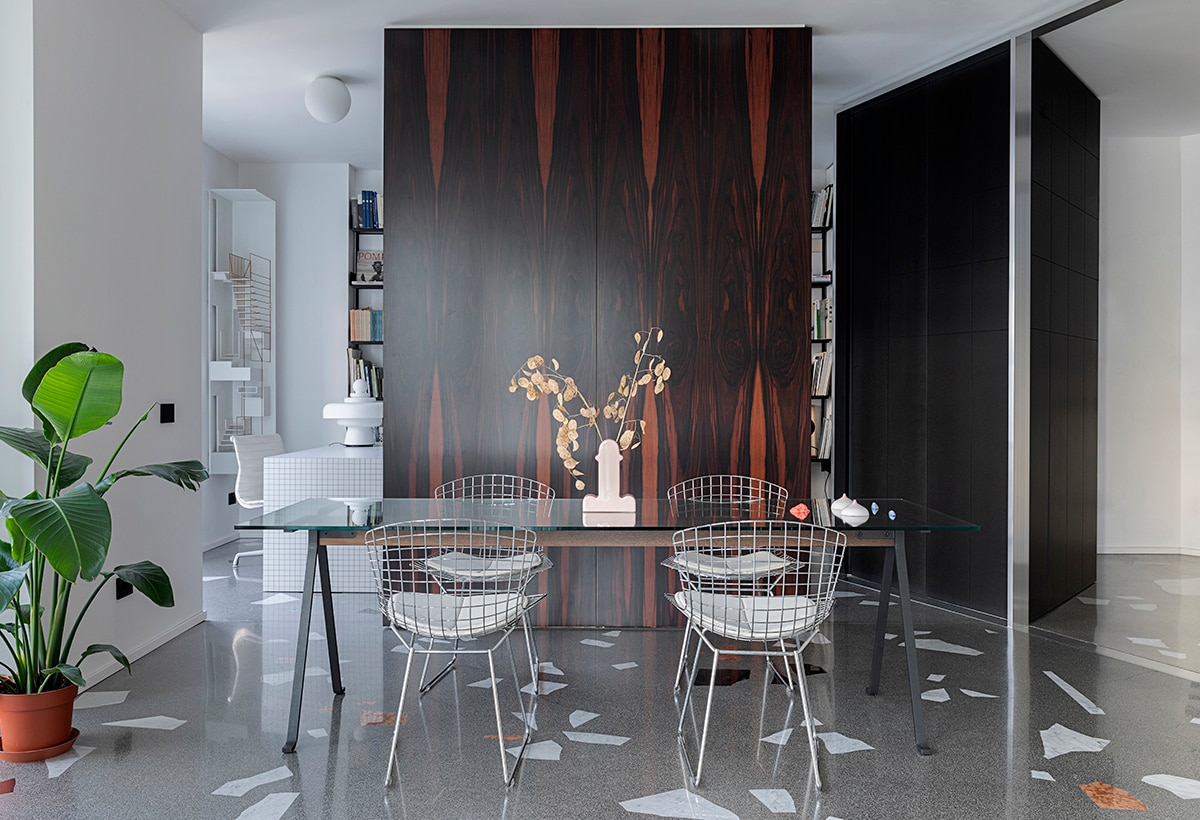 5
In an open, continuous flow of circulation, living-dining, kitchen and studio form islands of relation inside the unified space, underscored by the hypnotic pattern of the organic-mineral flooring in cement, stone and multicolored marble, also with The Blue Ray, a one-off by Francesco Librizzi. The Frate table by Enzo Mari for Driade is accompanied by iconic seats by Harry Bertoia for Knoll. Shiva vase by Ettore Sottsass for BD Barcelona.

“For this alter ego, I was inspired by the work of Mies van der Rohe at Villa Tugendhat, with the idea of establishing a dialogue that is also mannerist between the two centers of gravity that balance the warm and cool temperature of the space. The search for other crosswise focal points and more advanced vanishing points aiming at the two totems and their polar dichotomy – on the one hand, the flat, deep dimension of the wood grain, on the other the iridescent glaze of Ponti’s three-dimensional tiles – allowed me to complete the puzzle.” The back of the green volume, which contains the upper kitchen elements, is thus prepared for the encounter with the backdrop of the low appliances, all from the premium studioLine by Siemens, hidden behind the facing of a continuous reflecting surface in matte corrugated aluminium – “a memory of the panels used by Jean Prouvé to make the façade modules of his works of architecture” – visually balanced by a champagne-color reflecting backdrop that takes on a strange amber glow in the light from outside.

“
A house is not just property, not just a comfort zone, but also an identity. When I came across this apartment with an unusual location, i immediately understood that my relationship with Milan and architecture would find a direct expression."

Librizzi has also clearly traced a backbone of separation between the base of the pentagon that contains the private zone, two bedrooms with their own bathrooms, and the top open to the city, which is the living area. Longitudinal ribbing that counter-balances the radial perception of the plan, with a framework in die-cast alumium. “For me, this line represents the needle of the scale. To the best of my ability, the project came to a conclusion when I achieved this effect of self-balancing in space, which has been completed with a large black triangular prism, the cabinet that forms the border of part of the entrance. Last but not least, there are the inserted objects: all of them, without distinction, are called upon to convey a coherent story of the house.” After all, one of his favorite books, he says, is by the conceptual artist Lawrence Weiner: As Far As The Eye Can See.