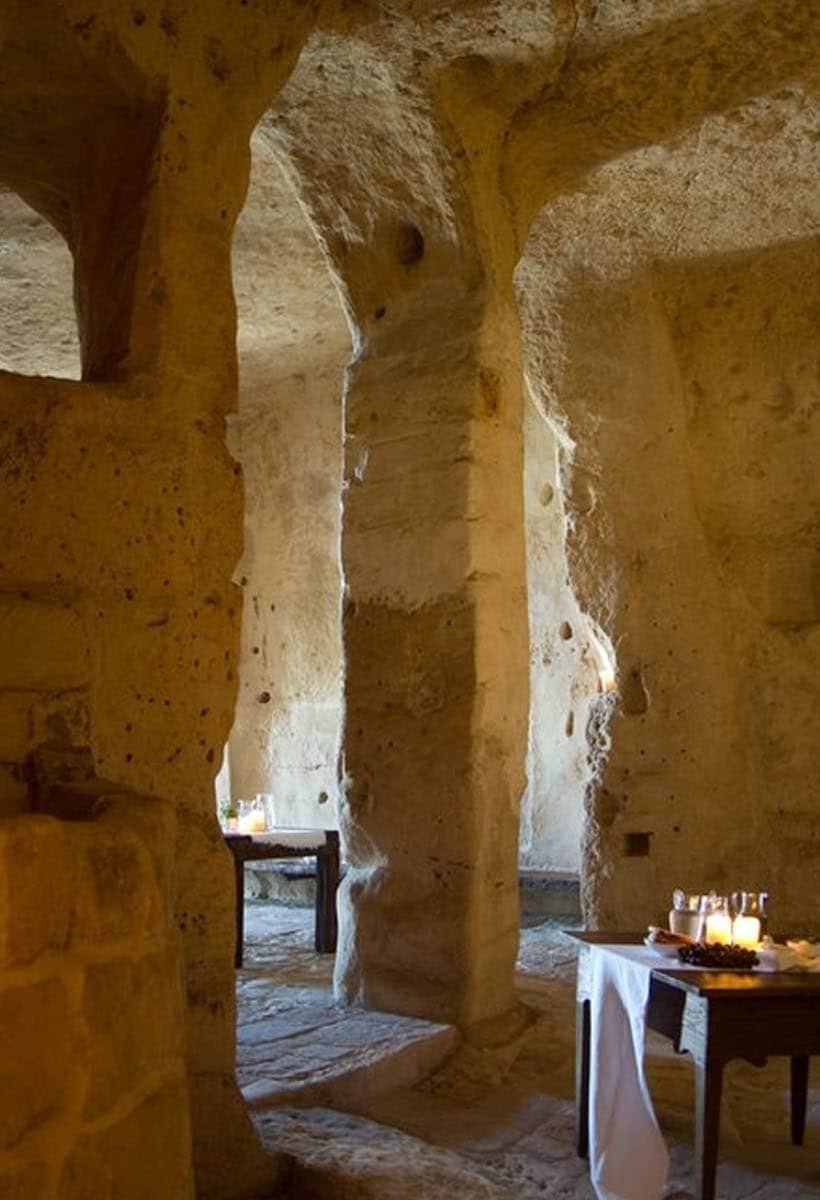 Welcome, interaction, integration. From the Sassi to the plain, Matera is increasingly hospitable and aimed at the future

On 19 January the year of Matera European Capital of Culture 2019 began, and demand has soared for hospitality for high-level tourism, ready to build an ‘experiential’ bridge between the ancient cliff-dwelling identity and the contemporary character of the city.

In the collective imagination, Matera remains the unique village of the Sassi, the cave dwellings that entered the UNESCO world heritage listings in 1993, an almost unreal historical-anthropological landscape made of ancestral caverns dug into the rock that once contained primitive dwellings of an agricultural and pastoral civilization; niches, crannies, steps, ladders, level shifts, inseparably linked to the territory and its descent towards deep cisterns and canals used for gathering water.

An extraordinary legacy of landscape, even more than architecture, of southern Italy, offering sensations and emotions, flavors and aromas, subject over the last few decades to an extensive conservation restoration, to guard against damage and loss of memory. 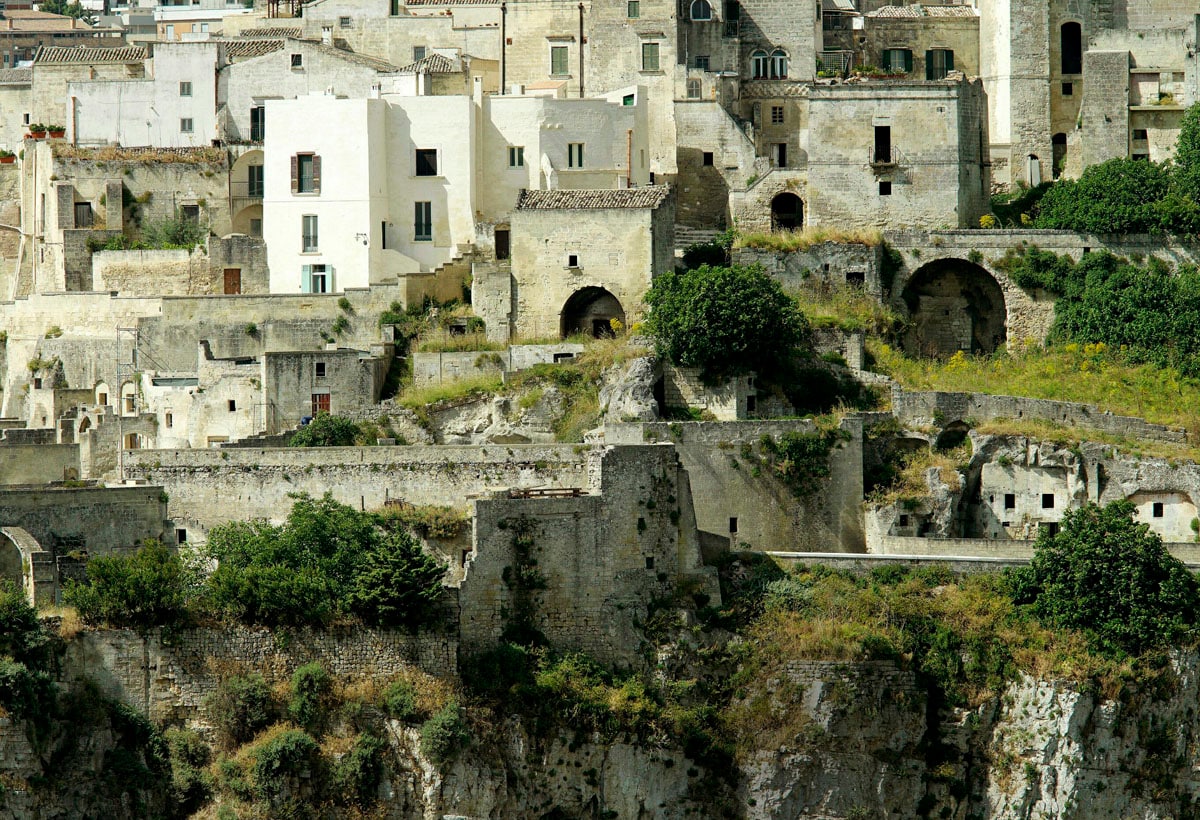 5
View of the Sassi of Matera.

In this sense, the project of Le Grotte della Civita is emblematic, a distributed hotel created by the Sextantio group in the oldest part of the Sassi, the Civita, over the Gravina stream and facing the majestic setting of the Parco della Murgia. With the mission of honoring the primordial material essence of this genius loci, the Sextantio group has conserved the original spaces and volumes of 18 caves (rooms) and an ancient cliffside church (now a communal space), matching them with minimal contemporary furnishings in a symbolic and structural continuum of great charm and authenticity. But there is more in the small city in Basilicata, with 63,000 inhabitants, where light and shadow dominate the space and the earth is not just the rugged, harsh context of the rocks. The elegant streets lined with monasteries, Baroque churches, 17th-century palaces and works of rationalist architecture take us back to a classic model of urban morphological development.

Precisely in the center, on the plain, La Suite can easily be reached by car and includes a multilevel underground parking facility; the structure provides an atypical form of 5-star hospitality, in dialogue with the history of the place, inserting in a work of modern architecture the redesign of a piazza as an urban set, ready for performances and cultural events. The facility has been produced by Rita Tamburrino, at the helm of Tam.co, a division of the better-known Cogem created by her father, Egidio Tamburrino, and designed by Studio Marco Piva. 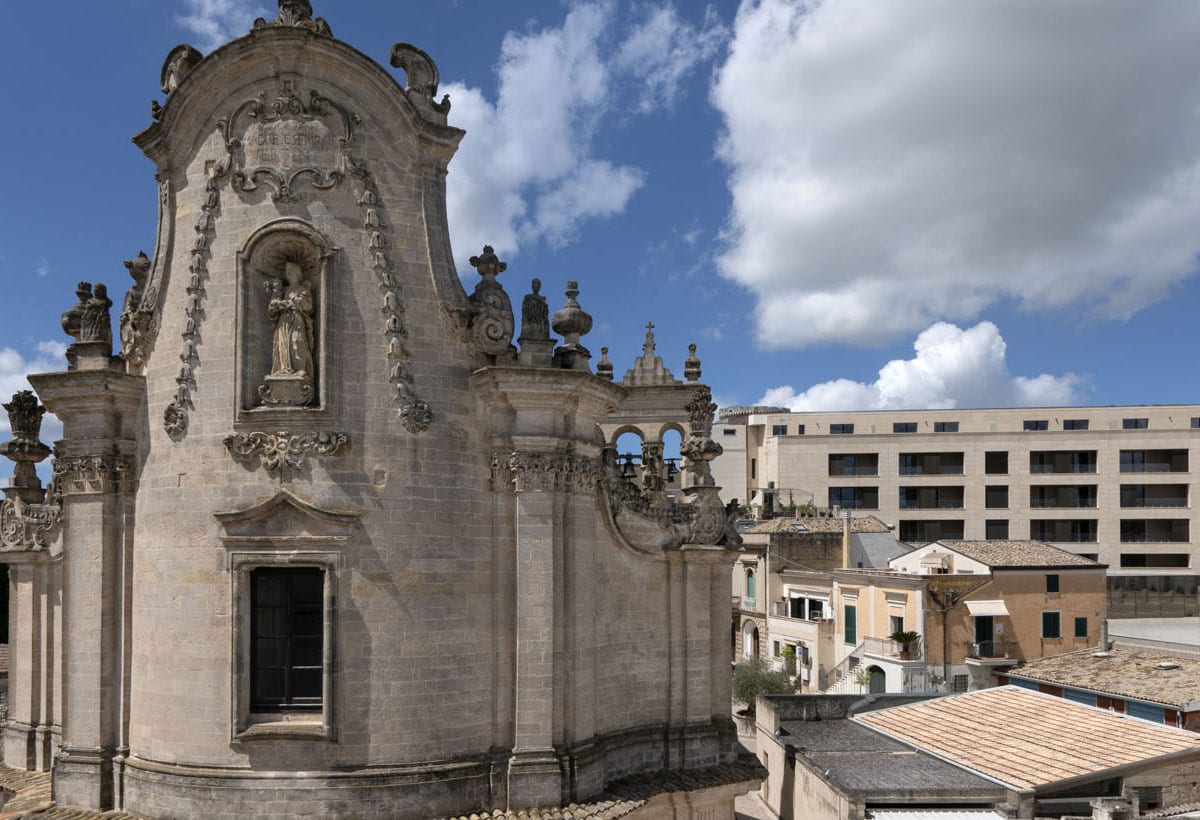 9
La Suite, in the historical center on the plain of Matera, is a hospitality structure designed by Studio Marco Piva for Tam.co. The volume clad in local mazzaro stone has wide, deep belvedere loggias in which to graft the decorative textures of sunscreens in stretched sheet metal.

An important achievement in an existing context that was not easy to shape, where the interiors are now being completed. La Suite is the result of the transformation of a residential structure, already split up by the project developers into a set of private units on five levels. It has been reconfigured to contain 40 comfortable suites – hence the name - ‘assisted’ by spaces for interaction and activities, ranging from the spa with pool in the basement to the lobby, the bar, the breakfast room and the kitchen (also utilized for food & beverage and room service) on the ground level.

“We have intervened in the garden belonging to the original building,” says Armando Bruno, partner in charge in the studio of Marco Piva, “a ‘void’ of the 15th-century city of which all that remains is the historic entrance arch, which has been dismantled, restored and reassembled exactly where it was, to combine it with a completely different facade system. This was the first step in pursuit of a dialogue, grafting a work of contemporary architecture into a place full of stimuli and emotions.” The building is in a strategic location of the city, at the joint between the medieval historical zone and the area of 20th-century and postwar development: on one side, the panorama of Castello Tramontano in Aragonese style, on the other the living nativity scene of the cave dwellings and cliffside churches.

“We have conducted in-depth research on the recent architectural history of Matera, including works by Giancarlo De Carlo, Ludovico Quaroni and Carlo Aymonino,” Marco Piva says. “This has led to the idea of defining the essential image of the fronts, which conserve a perception of ancient depth and appear as a texture of surfaces in mazzaro – a hard stone, taken in blocks from the only existing quarry – but by large linear grooves. These openings integrate the belvedere loggias with the decorative sunscreen texture in stretched sheet metal (supplied for every suite) and the large overhanging glazings of the volume of the winter garden, which extends the lounge towards the piazza.”

The magic of light has a fundamental role in the project. Lights not only add dynamism to the facades, enhancing the effect of suspended time of the architecture, but also involve the urban space of relations developed for events of a cultural character, including music, performing arts, literature and theater. Not only for the residents of the city.