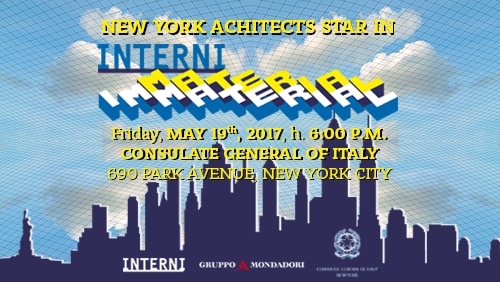 A discussion of the relationships & synergies between the Italian design system and the design disciplines in the United States.

For NYCxDesign (3-24 May) and in the wake of the exhibition-event Material Immaterial (3-15 April 2017 at Università degli Studi di Milano, Orto Botanico di Brera, Audi City Lab – Corso Venezia 11), the 20th major event produced by the magazine during the FuoriSalone in Milan, Interni and the Consulate General of Italy in New York have organized an encounter in the Park Avenue facility of the Consulate, at 6:00 p.m. on Friday 19 May, as a tribute to the relationships and synergies between the Italian design system and the design disciplines in the United States.

The protagonists of the evening will be the partners of two of the most interesting New York-based architecture studios operating on the international scene: BIG – Bjarke Ingels Group and SHoP Architects, which took part in the Interni event this year with two projects: respectively, the luminous installation Quick brown fox jumps over the lazy dog and the Wave/Cave pavilion in extruded terracotta.

The two firms will talk about their experience at Milan Design Week, focusing on the personal and professional dynamics created during the development of the work, and on the growing value of the FuoriSalone phenomenon, with the symbiosis between the Salone del Mobile furniture fair in Milan and the coordinated events around the city, a synergy Interni has promoted since 1990, which has made Milan the unrivaled capital of design on an international level.

The designers will share the spotlight with Carlotta de Bevilacqua, art director and vice-president of Artemide, and Carlo Geddo, CEO of Metalsigma USA, bearing witness to the collaboration between designers and companies that forms the basis of the projects in the INTERNI exhibition.

A special contribution will be made by Mauro Porcini, SVP and Chief Design Officer of the American multinational Pepsico, to narrate the scenarios of the present for Italian creativity in the United States, the perception of Italian design and the prospects of cooperation between the two countries.

Films of the twenty years of Interni events will be screened for the occasion, along with the report on the event Material Immaterial, featuring video interviews with BIG, SHoP Architects and other protagonists of the 20th edition.