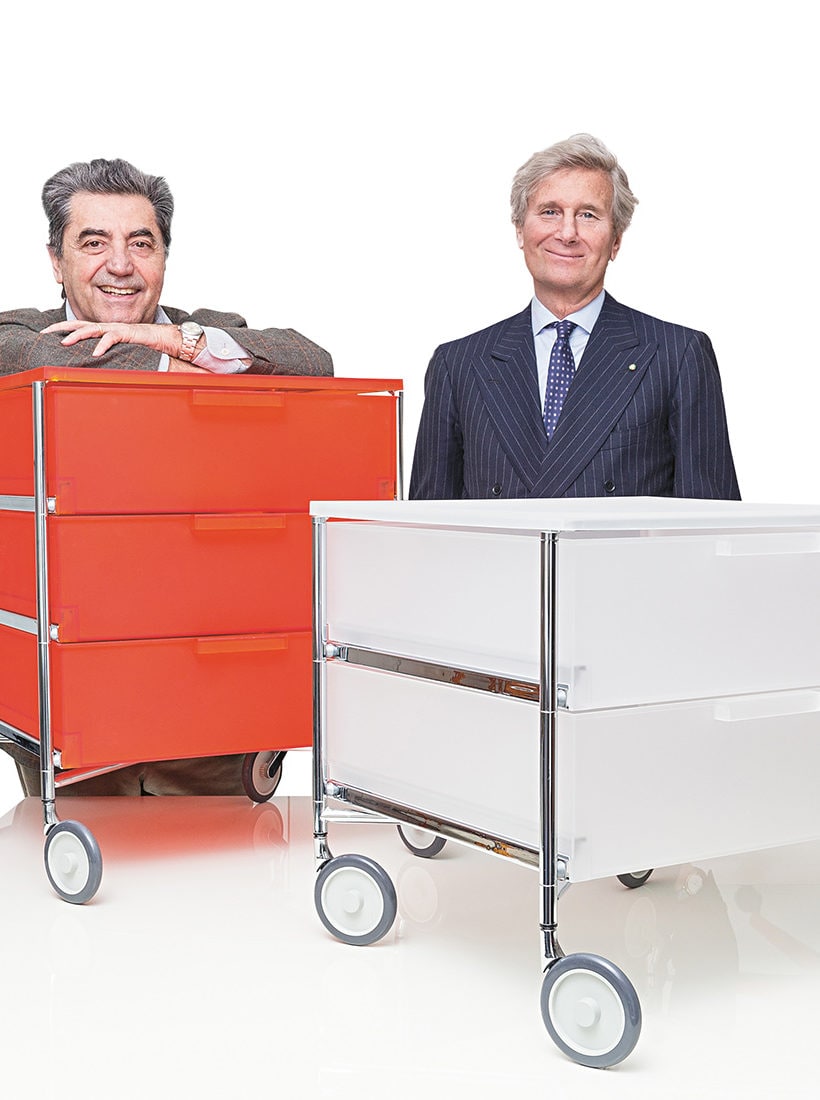 Their collaboration – which marks a quarter century, this year – has led to Kartell products of great fame and fortune, starting with the Gastone trolley, and then the Mobil modular drawer system, winner of the Compasso d’Oro in 1994, all the way to the new Multiplo line of tables. In a dialogue, Luti and Citterio narrate the history of a partnership that feeds on continuous challenges and seeks even more ambitious achievements.

It all began 25 years ago, in 1992. After four years of active work of Claudio Luti at Kartell, a new relationship began, with Antonio Citterio. Please tell us about it.
Claudio Luti: The encounter with Antonio, the third designer I contacted after my arrival at Kartell, was just as decisive as the one with Philippe Starck, because it allowed us to disrupt the rules of industrialization of plastic. For example, we changed the thicknesses of products.
We gave a new tactile and perceptive quality to the material. We combined it with other materials. Our objective was to change the image of plastic, which in those days was still that of the 1970s. From this viewpoint the Mobil collection is a real milestone in the company’s history.
Its design came from the idea of making the most beautiful thing that could be industrially produced at the time in plastic. We were convinced that to do this, we had to give consistency and presence to the material, and when I asked the engineers in the company to add plastic, they were surprised: they asked me if I realized that I would be spending money for no reason, since the products could work just as well with less material.
The same thing happened with the Battista trolley by Antonio, when I told them that when it closed, it should make a sound like the door of a Rolls Royce, not like the door of a compact car. My goal has never been to offer the lowest price, but to make the best possible things in keeping with the logic of industrial production.

Antonio Citterio: At the start of the 1990s there was still the idea that a plastic product had to be made entirely in the same material, whereas we thought plastic should be used only where it was needed.
It is no coincidence that both Starck and I decided to use metal, aluminium, for the structure of our products; we also reinforced thicknesses, working on corners and edges (back when everything was still rounded), and on the perception of the material.
In other words, we developed research on the language, which then exploded from 1994 on. I remember when we wanted to give plastic an image similar to blue colored plexiglass: the research focused on the material, but also on the process, and the results were surprising. Architects came into the booth at the Salone and starting to touch the material, to try to understand what it was…
No one emphasizes this, but four years later Apple came out with a computer in transparent green plastic, made with the same technology. Every product we designed represented a challenge to do something different with plastic.
Even today, when I meet with Claudio to think about a new product, we never discuss forms; we talk about strategies and innovations, related to a process and a material.

What were the most stimulating moments and the toughest challenges in the collaboration between Luti and Citterio?
A.C.: The challenges are precisely the initial encounters, from which our shared projects emerge. Talking about it, we find the reasoning to develop a new project.

C.L.: Antonio is certainly not a designer who shows up with a drawing of a new product. He puts dialogue with the company first, after which he puts the idea into focus, leading to the concept of the new product.

What characteristics and gifts do you most appreciate in each other?
C.L.: I have a direct, peer relationship with all the designers who work with Kartell. I like to sit down at a table with them, to discuss project directions to be developed. Maybe with Antonio it is harder to find the starting point, because he correctly demands a very strong initial idea. Once it has been found, with him it is very easy to move on with the process. He keeps the bar very high and asks a lot of the company, but he is right… he understands the importance of research and innovation.

A.C.: Claudio offers me very stimulating criticism. Though he came to the world of design somewhat later, having worked in the fashion industry previously, he has the ability to get into the product, to understand it, to see if it will work or not. He has a sensibility that is not shared by all design entrepreneurs. The history of design is one of relationships between designers and businessmen. No good products happen outside of this synergy between people.

C.L.: When I met Vico Magistretti for the first time, he told me: “Design is a job for two, architecture is something you can do on your own.” This taught me never to delegate the relationship with the project, with the designers.

At the Salone in 2017 Kartell presented the definitive and expanded version of the Multiplo table collection, designed by Citterio, which seems to shift the focus from the single product to a systematic vision of furnishing elements. What does this shift of scale mean?
C.L.: I believe it is wrong to continue thinking of Kartell as a company that makes plastic products. We make industrial projects and we use any material fits with the objectives. The Multiplo line of tables is an industrial project whose goal is to cover the entire range of tables that can be made by molding, therefore at affordable costs, meeting the widest variety of needs.
Whether or not we are using polypropylene, polycarbonate or other plastic materials, our mission is the same: to industrialize the product, and therefore to approach logistics, distribution and all related areas in industrial terms.

A.C.: The Multiplo line comes from the need to expand the offerings of the company for the world of contract. Kartell products have the characteristic of performing well in residential spaces and in multipurpose spaces.
Our goal was to occupy a space, in a more decisive way, that was still not covered by specific offerings in the Kartell catalogue. In design terms, the idea comes from architecture, where in this moment I am making extensive use of a ceramic material with a thickness of 6 mm, which is very strong. I am using it for example on 60,000 square meters of area for the airport of Doha, where everyone thinks it is stone.
The challenge we initially faced was how to bond ceramic to plastic, but ton sur ton, to create a monomateric effect. Later we saw that the ceramics also functioned well in the marble version: a epochal shift, for me! I would never have imagined, in the 1980s, designing tables in fake marble… But this is part of an evolution of design thinking in architecture, which is very visible. Until a short time ago, works of architecture were conceived as single blocks, where the structure was an integral part of the decoration.
Technological innovation has meant that today, instead, everything is reduced to a layer, and this makes the idea that a material has to be an expression of itself obsolete. Architecture has become an external wrapper around the structure, in keeping with an approach that is the opposite of the thinking of the rationalists. In the same way, the approach to design has also changed. And it has become much more functional and sustainable to use a marble-effect ceramic top instead of real marble.

This April Kartell and Citterio will also present the second step of research on sustainability: the Bio Chair. Could you tell us how this research began?
A.C.: One day Claudio told me he had purchased the exclusive on a material of botanical origin created in Italy; in practice, a plastic not derived from hydrocarbons, biodegradable, but with the strength required to obtain the certifications applied to furnishings in traditional plastic.
This was the start of a challenge that has been very engaging: the experimentation focused on testing the performance of the material in the industrial processing phase. Again in this case, I would never have imagined working on an ecological chair… It is a project that is part of a new path of research, probably an epochal passage of industrial production.

C.L.: We are very lucky because Kartell, like other design companies that have made innovations, is highly respected in Italy and abroad. The big multinationals that produce materials are willing to collaborate with us, as are the producers of machines, the suppliers, the subcontractors. This happened, for example, when we developed the research on polycarbonate, where General Electric provided essential support. The result was that by showing Kartell chairs, the American company sold polycarbonate all over the world. Anyone can make a biodegradable chair if it has to simply end up in a museum. The real challenge is to make it really functional, based on industrial reasoning, and competitive on the market.