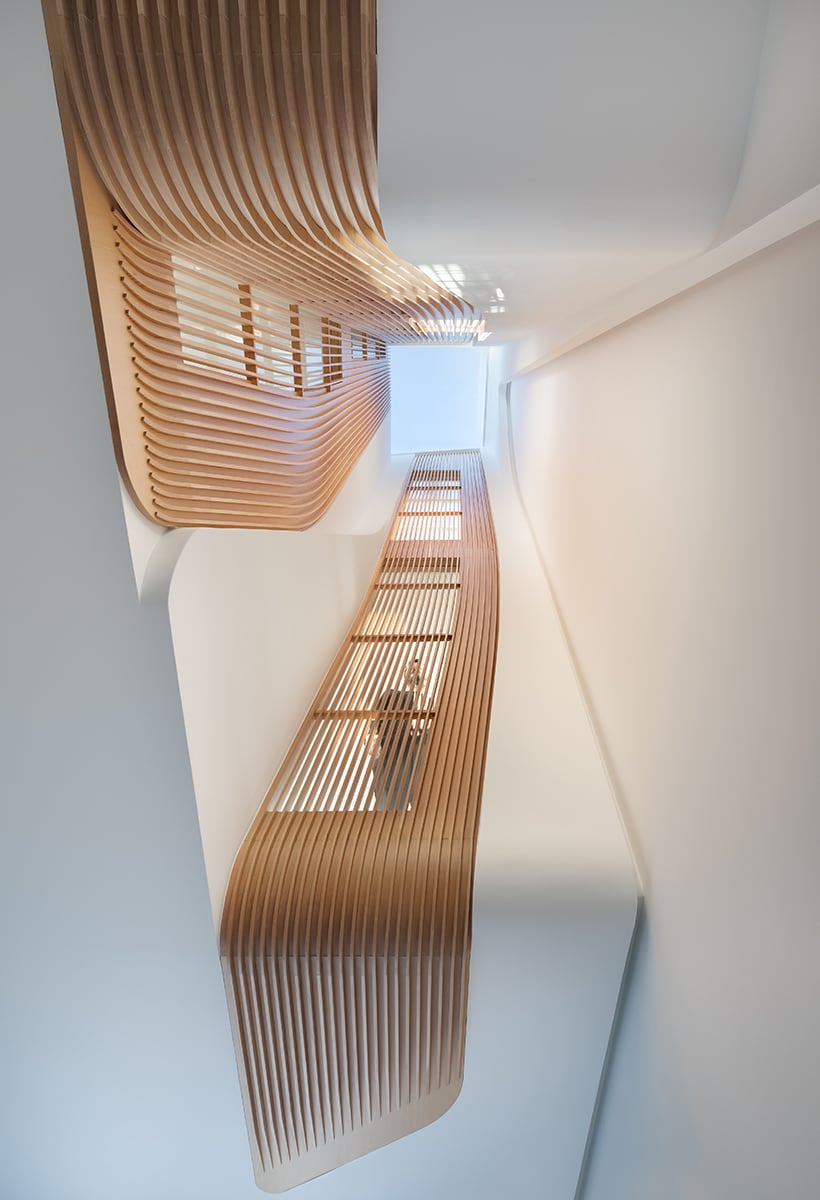 #architecture
Flow Architecture, a column of light
In London, in reconstructing a terrace house of the Victorian period, a central compartment has been created that crosses and lights up all the levels of the house

A bold, yet very concrete approach in shape modelling and integral technical control of the project characterises the work of Flow Architecture, the studio founded in 2013 by architect Annarita Papeschi, who graduated in Florence and at the prestigious Architectural Association of London, and by German architect Vincent Nowak, who studied at the Technical University of Aachen.

°
FFlow Architecture is a Riba Chartered practice working at the intersection of architectural design and urban research. Questioning the fundamental relationship between human and space, and at the larger scale between citizens and cities, Flow’s work explores the radical potential of ubiquitous technologies to develop collectively crafted experiences and spaces. By layering the observation of environmental and bodily phenomena, the approach develop novel aesthetics that emerge from the collaboration of matter, technological infrastructures and human behaviours. Since the practice’s inception in 2013, Flow has built an extensive experience on residential projects in London, with the recent completion of the Light Falls house representing the apex of the office explorations on novel form of domesticity. A focus on bottom-up forms of public engagement is at the core of Flow’s urban research, a theme that Flow investigates through the making of installations and events that have appeared at festivals and art venue in UK and Europe.

An approach that perhaps stems from the many years of experience they had working with Zaha Hadid. The design studio, which combines professional activity with research work, participated in the Tallinn Biennial in 2017 and twice in the London Festival of Architecture.

Experimenting with original solutions to create a completely new space and, at the same time, respecting the constraints of continuity imposed by the Victorian district: these were the guidelines of the Light Falls house in Kensington, designed by Flow in cooperation with Magrits, which has been designing private homes in the British capital since 2010. Here, both comfort and image meet contemporary requirements, supported by a dynamic and futuristic drive. 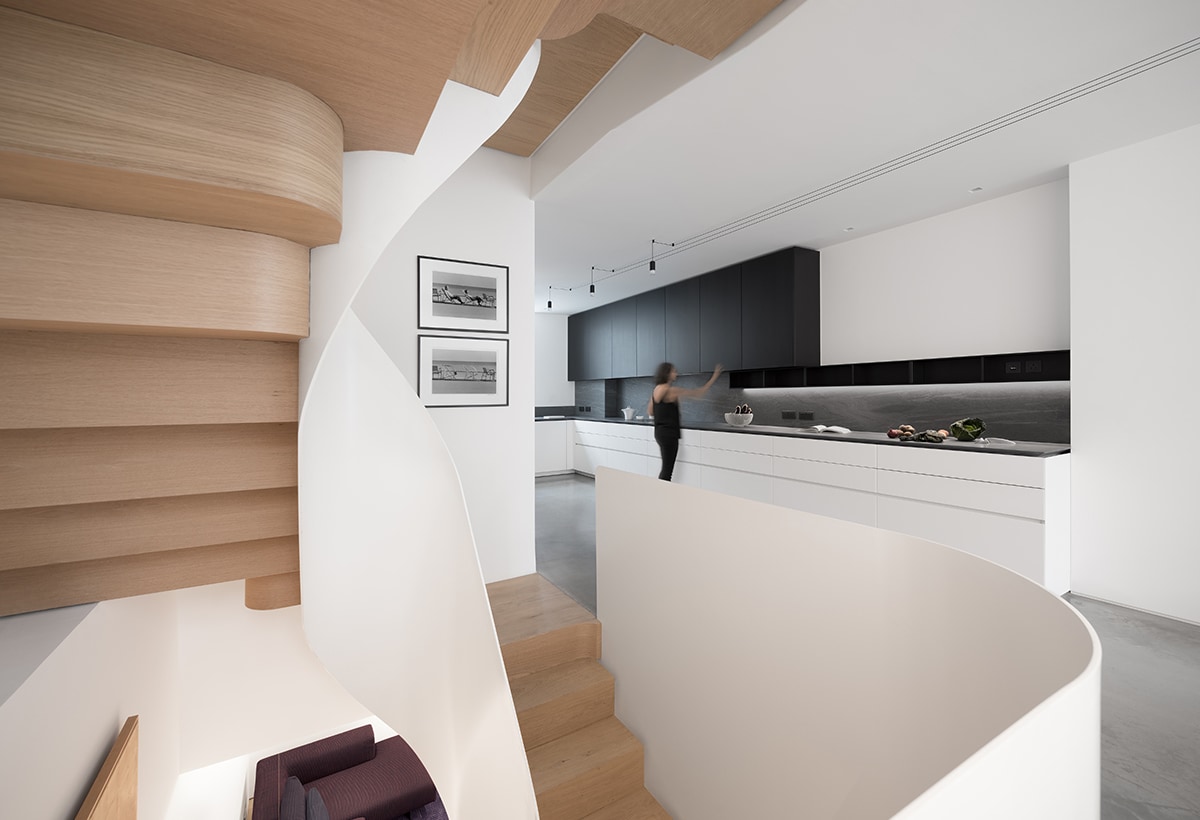 6
The kitchen space, with the staircase leading down to the media room.

According to town planning regulations, the old Victorian house had to be maintained, but the instability of the free wall of the building, the last of a row, forced its demolition and reconstruction, “(almost) as it was and (exactly) where it was”, with a new steel and wood structure. An opportunity that made it possible to reinterpret the historic façade introducing a few slight variations – especially by expanding and improving the access to the garden – and to rethink the interior in full freedom.

“
The name - Light Falls - perfectly expresses the soul of this house. The cascading effect of sunlight that, in a vertical movement, reaches the centre of the building, revives the interiors and dissolves the boundaries between the inside and the outside."

The building, a typical London terraced house dated 1851, was made up of four floors closed between the blind walls of a deep lot. This caused two problems to the owners: a strong deficit of natural light and a rigid and very fragmented internal organization. The project, compared to the original volume, has added a basement and, at the back, a double height window that embraces the living room and the dining room. But the main change, which sets the character of the entire project, is the opening of a void space, almost a covered miniature patio dug in the centre of the house: as in Baroque churches, the interior is characterized by a surprise effect based on the unexpected flood of natural light that, coming from above and grazing the skilfully shaped walls, enhances the sculptural character of each architectural element. 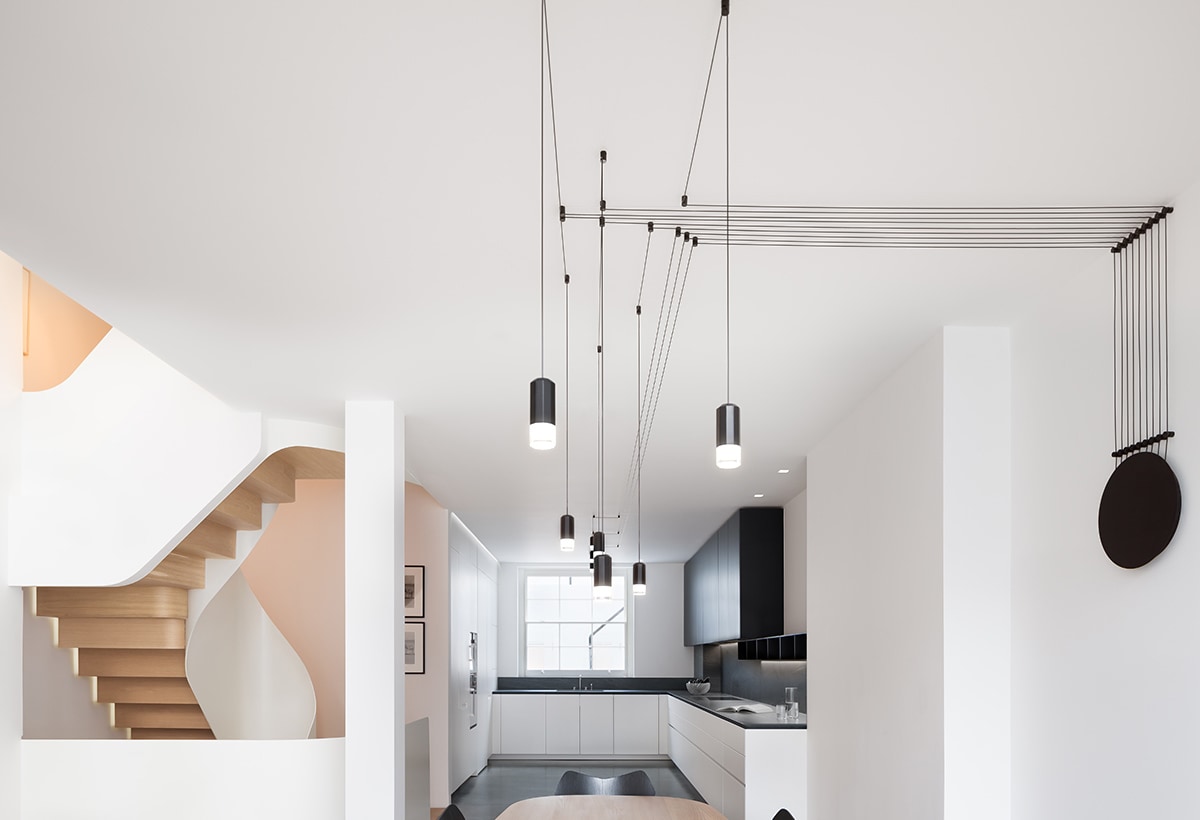 “The name - Light Falls - perfectly expresses the soul of this house,” said the designers. “The cascading effect of sunlight that, in a vertical movement, reaches the centre of the building, revives the interiors and dissolves the boundaries between the inside and the outside”. Grazing the white, sinuous walls, natural light creates ever-changing atmospheres throughout the day. The passing of hours and seasons modulates the light, the colours and tonal nuances of the house.

“
The main change, which sets the character of the entire project, is the opening of a void space, almost a covered miniature patio dug in the centre of the house: as in Baroque churches, the interior is characterized by a surprise effect based on the unexpected flood of natural light."

The protagonists are therefore the two spaces that develop in height, both covered by two large skylights: the stairwell and the 'patio', a real luminous column that divides the building vertically, crossing the two upper floors, and directly lights up the living room located on the entrance floor. 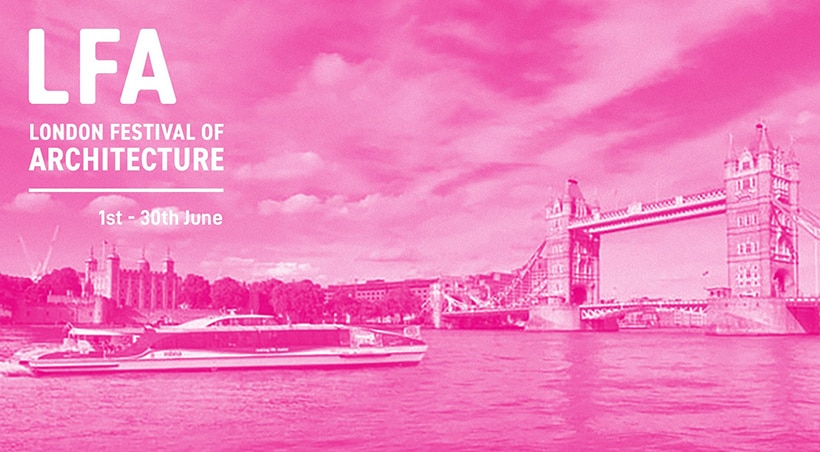 4
The Flow studio took part in two editions of the the London Festival of Architecture, the world’s largest annual architecture festival. With an amazing programme of events and activities taking place right across London from 1 - 30 June, the Festival welcomes everyone into the conversation around architecture and city. What makes the Festival unique is that the vast programme of more than 500 exceptional events each year is delivered by a diverse mix of independent organisations and individuals – helping to radically democratise the debate about architecture.

On the walls of the vertical space, the parallel tracks of the wooden grids – a strong graphic and material presence – guide the light downwards and, at the same time, attract the gaze of those who are in the living room towards the square oculus, up to that portion of the London sky that, although small, is acquired as a precious and inalienable property of the renovated house.