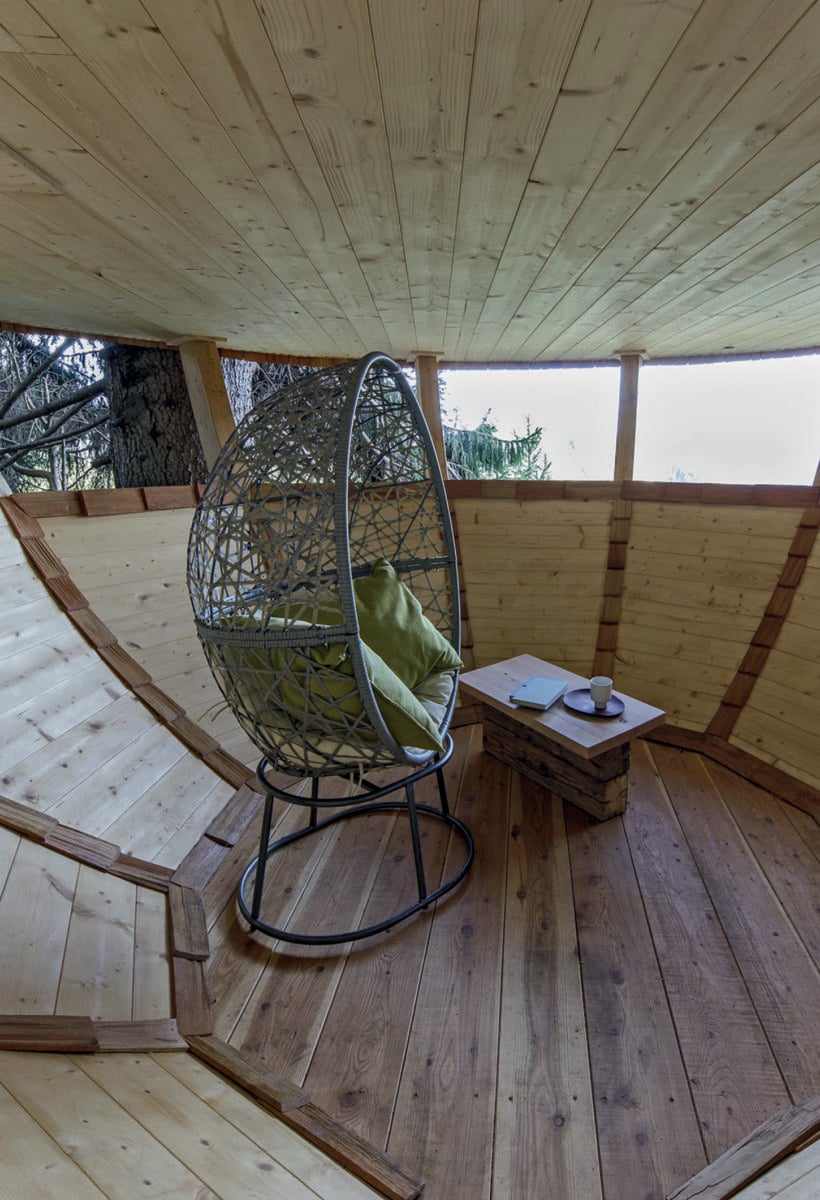 “They are suspended at approximately 10 metres in height. The first is supported by three trees while the second is anchored to a single trunk.” We are talking to the architect Claudio Beltrame, on at the opening of his ‘Pigne’, two mini eco-lodges situated in a forest of firs in the Carnic Alps.

Created for the purposes of tourism, thanks to regional funding from Friuli Venezia Giulia, the treehouses were intended to increase the accommodation offered by the owners of the Malga Priu farm stay near Ugovizza, a tiny Alpine resort a few kilometres from Udine.

“The idea had been in the back of my mind for some time,” says Claudio Beltrame. “About three years ago I took part in an international competition in the United States for a treehouse project celebrating the use of wood, receiving a mention for the originality of my structure.

Thanks to a series of fortunate coincidences, but above all my encounter with the Friulian company DomusGaia, which found a brilliant solution to the complicated structural and engineering issues, we have managed to build the first two pinecone houses. They are each 35 square metres in size, with a living room, kitchen and bathroom on the second level and a double bedroom nestling in the evocative pine-cone on the third level.

Underneath the house, on the first level, is a covered terrace offering a 360 degree view of the surrounding mountains.” Made from laminated timber and X-lam, the ‘Pigna’ treehouse has an innovative frame made from timber bent into boomerang shapes,  insulation made from natural materials and larch shingle cladding resembling the wooden scales of a pine-cone – “it took us two months to attach the shingles, each of which was cut to size singly”.

All the wood used was sourced in the Alpe-Adria forests and worked on site, a choice in line with the sustainability of the project as well as the desire to promote local enterprise.

One of the goals of the project is to promote the local area, also in terms of tourism, as well as celebrating the excellence of design Made in Italy and in the Friuli region in particular.

In the forefront is local company DomusGaia,  which, after completing major housing schemes in Italian regions hit by earthquakes, is returning to Friuli Venezia Giulia with a project encapsulating its construction philosophy: from the exclusive use of green materials to high-energy performance in buildings, from environmentally friendly choices to maximum attention to construction detail.