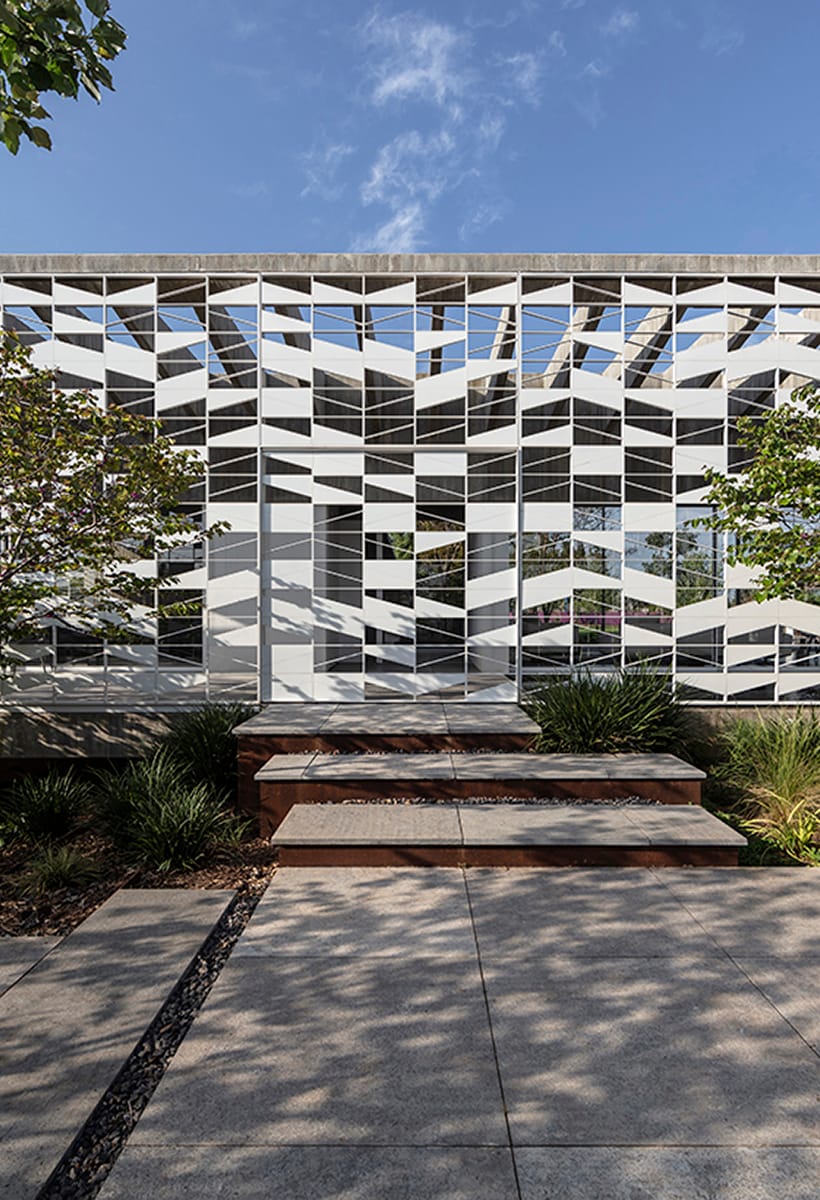 In Bnei Zion, a moshav north of Tel Aviv, Israel, a house draws a central courtyard open to the green surrounding it, protected by a metallic architectural skin that draws a geometric pattern, like a screen for the sunlight and a visual filter of the breakdown of reality

A moshav is a cooperative-type agricultural settlement consisting of individual farms; they were established by the Socialist Zionists during the second Aliyah (the wave of Jewish migration at the beginning of the 20th century). The one in Bnei Zion is located in the centre of Israel, in the Sharon plain north of Tel Aviv.

Here, the design by Pitsou Kedem Architect of this new large house interacts with the history of the settlement (dating back to 1947), maintaining the character of an architectural structure placed among the green (once productively cultivated) and a single-storey building, whose layout configures an internal courtyard where the swimming pool has been created. The latter is complementary to the bodies of water used around the house and integrated into it as microclimatic bands within the effective filter-frame between inside and outside, created with the use of abstract geometric shading textures.

The house is composed of three interconnected wings that form a large inverted 'L' with a perpendicular conclusion on the end of the longer side. The open pavilion alongside the swimming pool is added to the layout of the house; they are both perpendicular to the main volume and close the overall form of the intervention, creating the courtyard with an internal garden that follows the movements of the ground.

The entire building is in exposed reinforced concrete, a material that unites the governed sum of volumes in a unified, monochromatic and mono-material way. The main front facing the street is shielded by an arboreal curtain and composed of the continuous covering of the metallic 'architectural skin', conceived as a white surface perforated by geometric figures and inclined lines, called to draw a dense motif punctuated by rhombuses and triangles turned upside down and juxtaposed in a successful relationship between full and empty. 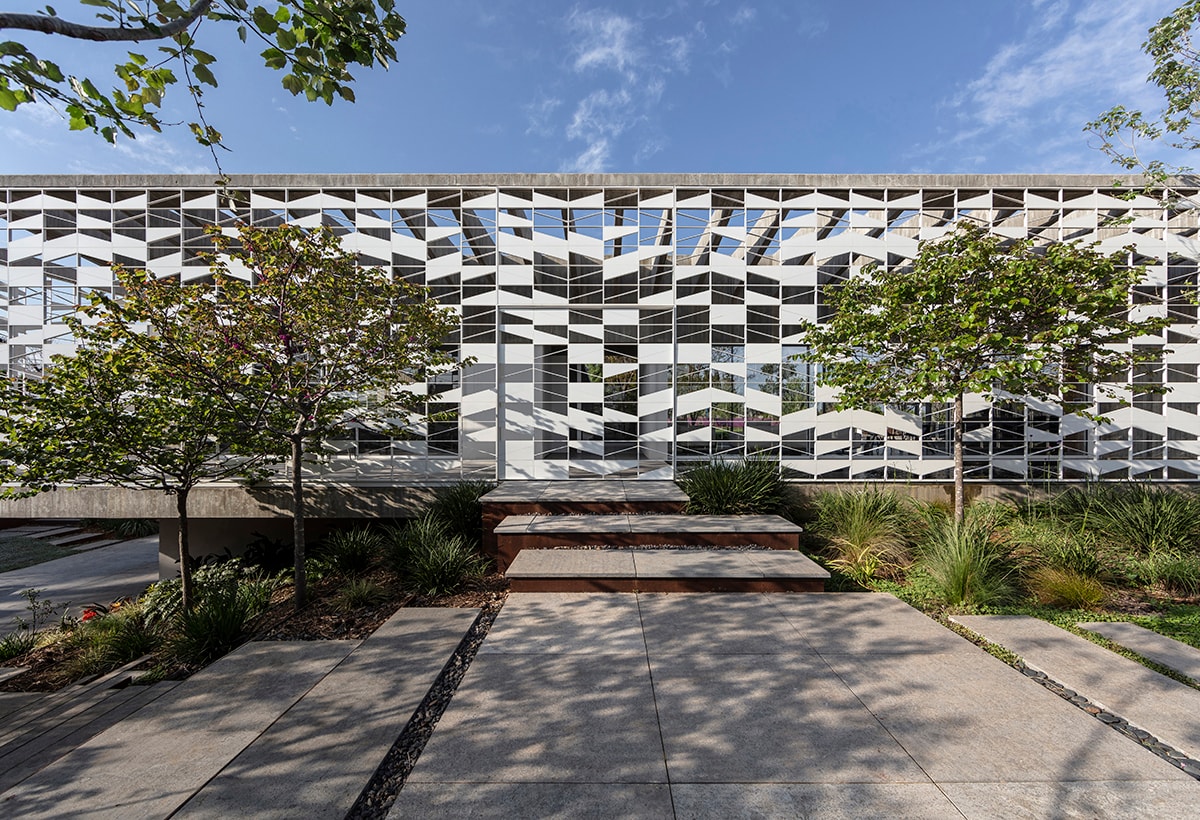 5
The front entrance with the metal 'architectural skin' extending continuously, concealing the entrance gate in its length. The abstract motif builds an effective visual screen and a brise-soleil to create a buffer zone, even at a microclimatic level, between the inside and outside.

The entrance door is part of this texture and is deliberately hidden in the figurative game of the whole that acts as an effective visual screen and brise-soleil to create a buffer zone between inside and outside, whose microclimate is reinforced by the body of water that anticipates the living spaces. The suggestive perimeter pool is placed between the metallic skin and the internal concrete façade, under a portico marked by open-air septa of the same material. 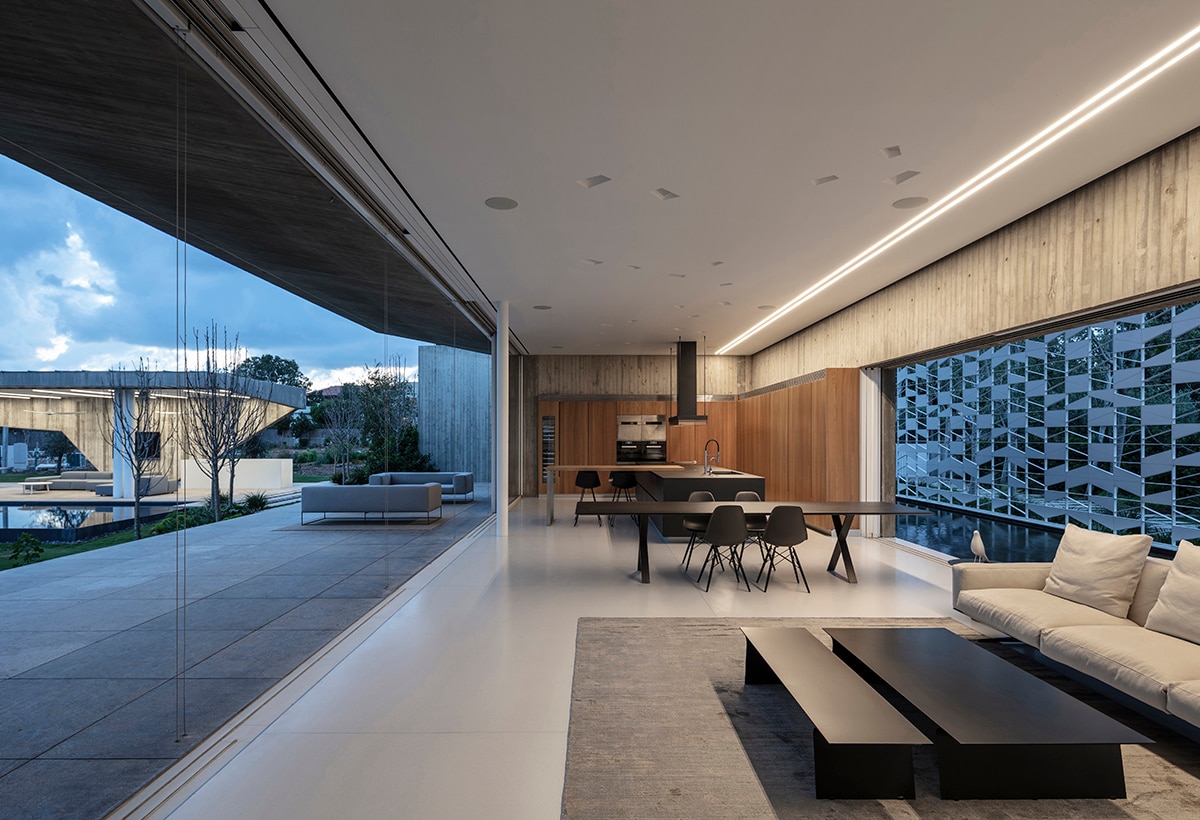 4
View of the living area towards the kitchen. On the left, the large continuous window opens onto the inner garden courtyard closed by the pavilion facing the swimming pool. INARI Tables by Design Mist-o and Ice Club outdoor sofas by Piero Lissoni, all Living Divani, interior Soft Dream sofa by Antonio Citterio for Flexform, LAX Table by Gil Coste for More, Fiberglass Armchair chairs by Charles & Ray Eames, in the Vitra catalogue.

The portico continues to the left of the entrance with outdoor pavement to turn around the living area, a direct extension of the domestic space that expands along the entire surface of the body parallel to the access road. The unitary space of the public part of the house, which includes a kitchen, dining area and double living room, then opens with a continuous window facing the last portico overlooking the central courtyard and pool. The space is completed with an overhang of the concrete covering along the entire length.

“
The main front facing the street is shielded by an arboreal curtain and composed of the continuous covering of the metallic 'architectural skin', conceived as a white surface perforated by geometric figures and inclined lines."

The courtyard is closed by the perpendicular arm slightly smaller in length: it is connected to the living area with the final parallel body of the master bedroom at the end of the garden, a sort of finished element which is also shielded by the geometric skin of the façade towards the green outside. The four children's rooms are here, each with its own bathroom and walk-in closet, placed in line along a windowed corridor overlooking the garden. Shielded by full-height white curtains, the continuous glass window overlooks the pool and its pavilion, acting as comparative elements in terms of composition. 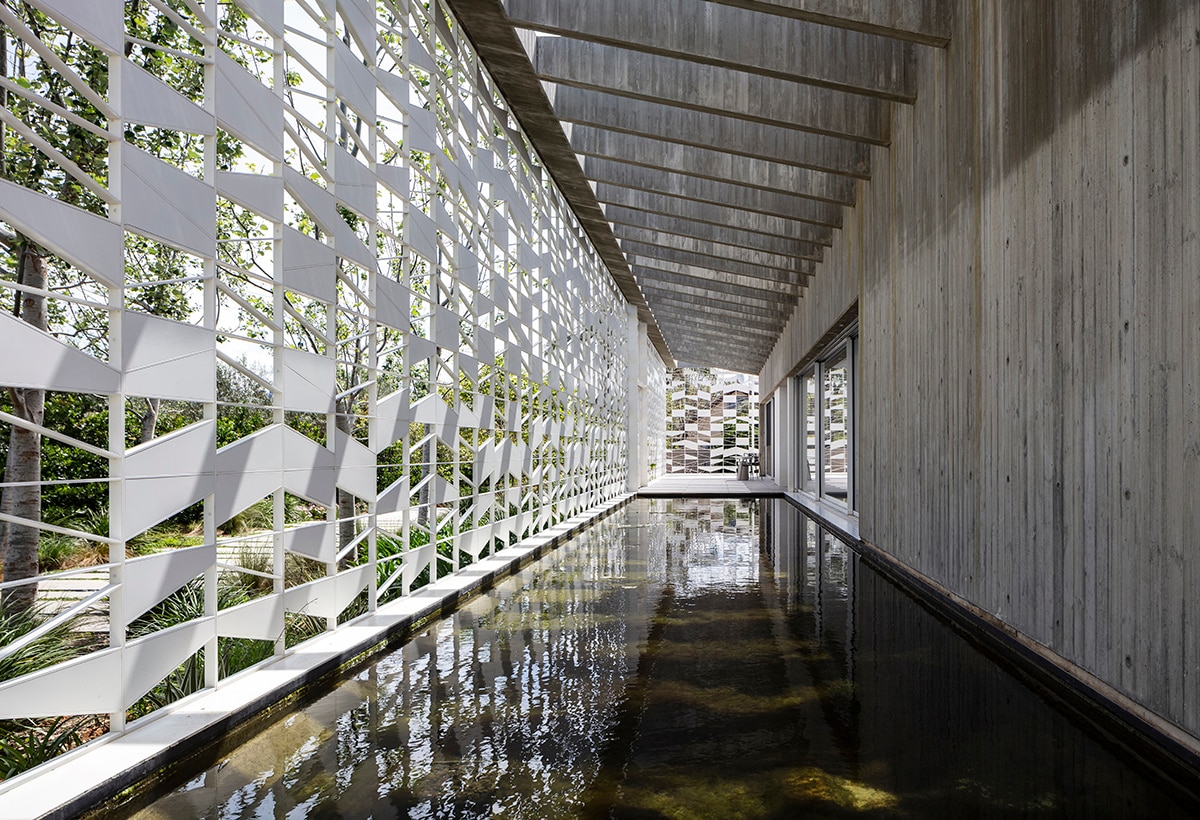 1
The architecture of this article is characterized by an external metallic skin from the entrance and the exposed concrete wall. The stretch of water contributes to creating a perimeter microclimate under the shadow of the free-projecting beams. The idea makes us reflect on the fact that the building envelope has assumed an influential role in the definition of new languages and expressive dynamics in the contemporary architecture. Through the building envelope the performance of the entire building is guaranteed in terms of energy saving, climate comfort and light, privacy. The perceptive dimension of unity is also defined, its volumetric transcription in relation to the context of insertion. The architectural concept and design requirements are transformed into high-performance systems

Just like the entire building, the swimming pool service pavilion is also made of exposed reinforced concrete, but unlike the domestic environments that are partly shielded and introverted, this pavilion lacks walls: it is a sort of stable 'tent', whose cover rests on light double pillars on the side facing the swimming pool, and closes on the opposite side with a concrete wall that draws an inverted offset triangle, extending towards the left side to reach and support the flat roof of the same material.

“
The swimming pool service pavilion is also made of exposed reinforced concrete, but unlike the domestic environments that are partly shielded and introverted, this pavilion lacks walls: it is a sort of stable 'tent'."

In short, the construction links the interior and exterior with different solutions that filter and redesign how reality is seen at the edges of the borders, instead offering a free and continuous scene once the viewer is inside the garden courtyard, which collects the entire composition as a collective fulcrum.