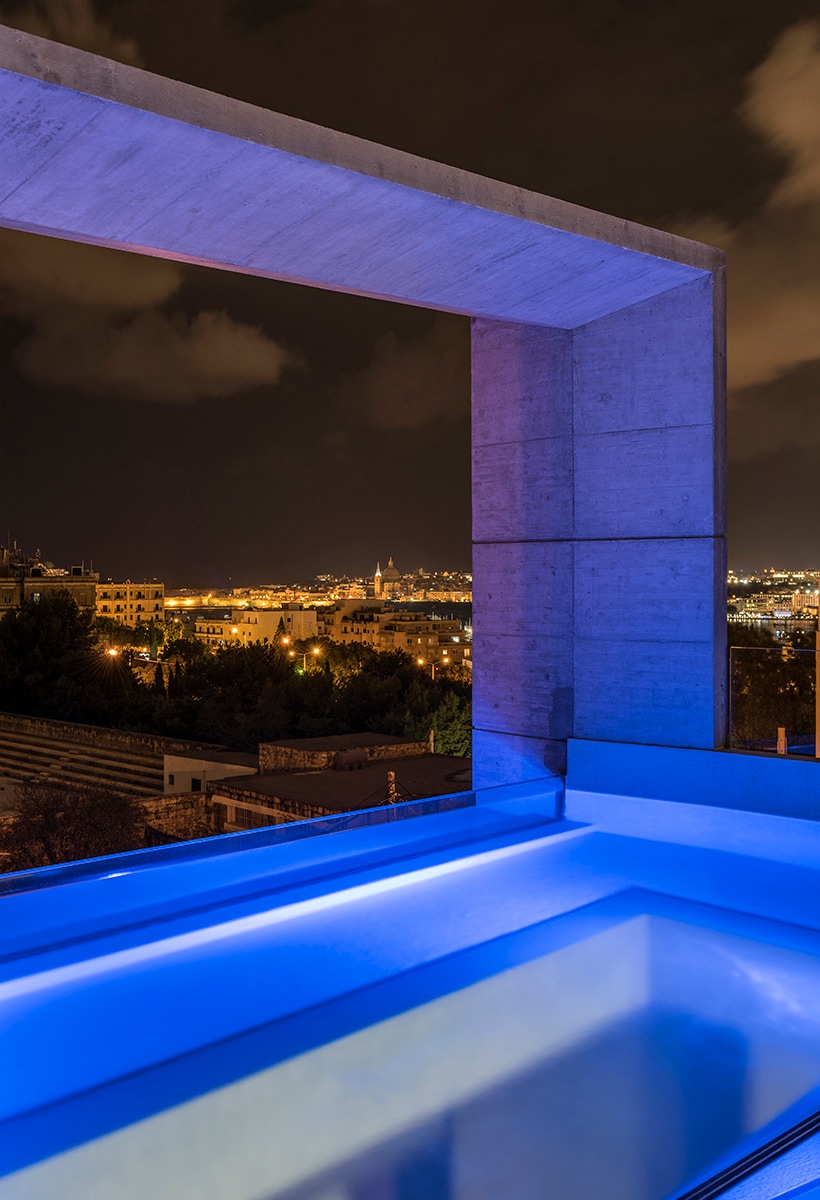 In Malta, facing the port of La Valletta, a house on three levels is inserted in the existing frontage, effectively asserting its modernity through a geometric volume with a completely glazed facade that reveals the unified space of the interiors

The outcome of a procedure of demolition and reconstruction of an old terrace house that not longer met the needs of its owners, the project for this three-story dwelling has permitted the firm Architrend of Ragusa to operate within a logic of rearrangement and grafting, which seems to be one of the most widespread and relevant practices in the architecture of the new millennium.

Working on the urban fabric in terms of microsurgery and small-scale mending in relation to the surrounding buildings, paying attention to the frontage that forms the city to partially update its image in morphological continuity that never descends to the level of stylistic imitation.

°
Architrend Architecture is an architecture firm that approaches design as an interdisciplinary venture where minimum form takes maximum effect. The entire project is considered starting, in all design process, from client's needs as well as site and environment exploration to design and build with high quality and through an extreme attention to details in the construction phase. Since from 1989, the two partners Gaetano Manganello and Carmelo Tumino design and build public buildings, resorts and single family houses with a contemporary, minimalist and direct approach.

This is one of the paths being taken in many countries by the new generation of architects, given the fact that large real estate structures exist, generated by the architectural culture of the 1970s and 1980s and set down like menacing spaceships in the city, disrupting its physiognomy and its meaning in the name of the architect as demiurge.

This house at La Valletta thus seems like an example of our times and a painstaking operation that connects the interior design solution to the urban image, in a direct and explicit relationship with the architecture of the host city.

With a narrow oblong form extending to the back, containing a small courtyard transformed as a secret garden, the house with its closed sides is precisely grafted into the available space between the two neighboring buildings. The choice has been to open the facade and the back as much as possible, in order to capture daylight, also conveyed inside from above through a large opening formed by the glass bottom of the pool on the roof, adding evocative moving patterns of brightness in the full-height space.

A single material, fair-face reinforced concrete, shaped on the basis of mathematical tenets regarding the dimensioning of the horizontal formwork setting the rhythm of the blank surfaces, functions as a unifying element in a space that is rearranged at every level. The motif of a single, ample spatial character for the entire project can be seen in each room, starting with the entrance from the street, a raised two-story space accessed from an external staircase placed alongside a ramp that leads to the semi-basement garage.

4
In this gallery, a series of architectures with Schüco fixtures. Schüco produced the large double-height glazing of this house. Active in the Italian market in the development and distribution of aluminum systems for high quality windows, doors and facades and a subsidiary of the German group, Schüco Italia offers a range of high quality products and services on the national market, developed to meet the specific needs of fabricators, designers, designers and investors. In line with the philosophy of the German parent company, the company, based in Padua, has introduced in Italy a new way of designing buildings.

The staircase then continues inside, where a patio vertically crosses the interiors. Ingenious ribbon staircases are detached from the walls and aligned with them as independent features. The ends, designed as full-height continuous glazings, can be darkened with external roller blinds, and offer a striking perspective of vista and light that crosses the spaces to reach the roof terrace with its swimming pool, flanked by the kitchen and the dining zone.

Towards the street, at the entrance, the daytime zone and library are joined by a home theater, and on the upper level by the dining room facing the outdoor deck, conceived as its direct extension, leading to the infinity pool itself. The innermost, most protected part of the house contains the bedroom zone.

“
This house at La Valletta thus seems like an example of our times and a painstaking operation that connects the interior design solution to the urban image, in a direct and explicit relationship with the architecture of the host city. "

The main facade, in relation to the existing adjacent buildings, develops on two levels with a large full-height glazing that reaches the height of the cornices of the neighboring houses, underlining the value of the graft achieved in the project. At the top, a suspended portal with essential lines, containing the glass parapet of the pool, creates an architectural figure of completion, framing the colors of the sky and at the same time rectifying the profile of the building in relation to the three levels reached at the innermost part of the lot.