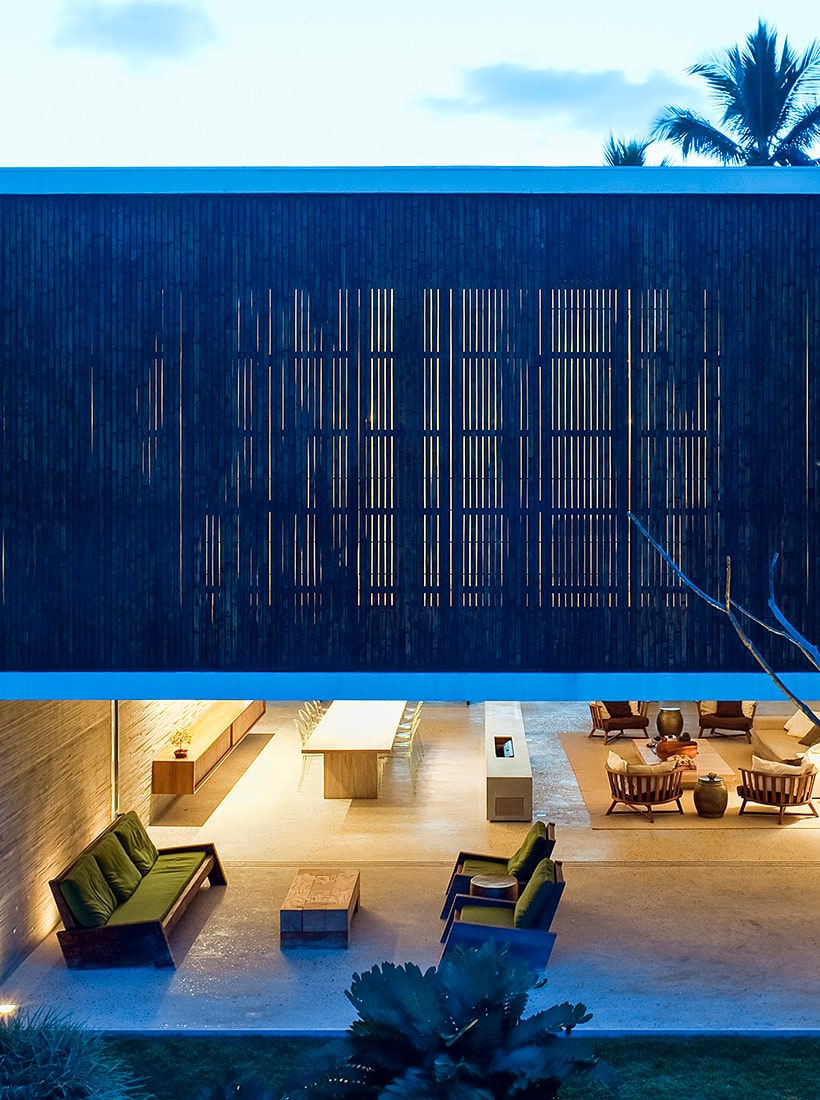 Precious and secret, solid and dematerialized at the same time. Like the frame in stone, wood and bamboo of an empty shell, in which space flows from outside to inside, inhabiting the void and generating visual communication between the parts.

A house designed by Marcio Kogan, founder and owner of Studio MK27, always brings surprises and a fresh approach. Because this architect from Sao Paulo, who has never made a mystery of his passion for the great masters of Brazilian modernism, from the outset of his career has demonstrated a remarkable sensitivity that combines clear, rigorous design – orthogonal lines, basic geometries, open floors – with a theatrical way of shaping space.

Also in this case, starting from a classic matrix of reference, he has experimented with a composition of volumes and spaces that thrives on transparency, lightness and sensorial qualities based on a sort of ‘soft’ brutalism, with citations of the architecture of the 1950s, first and foremost that of Paulo Mendes da Rocha.

The emotional impact is guaranteed, also thanks to the context, in this case, reached only by boat: Ilha Bela, an island off the Brazilian coast, in the state of Sao Paulo, facing the Atlantic and almost entirely covered with dense tropical forest, which the inhabitants of the metropolis see as a weekend retreat.

In the more developed northern part of the island, the volume of an architectural promenade stands out (430 square meters), directly connected to the beach and the horizon, with the main access relegated to a driveway at the back, where a stone structure marks the threshold towards a flourishing private garden designed by Renata Tilli.

This stone volume, independent of the house proper, contains a small storeroom and technical zones, and forms the unconventional entrances to the house from the patio, guaranteeing privacy for the interiors: the living areas on the ground floor, the more private bedroom zone on the first floor.

Communicating with the garden, the living area is like a visual cone, a unified space organized by its furnishings (including lots of Italian design), structured and enclosed between two lateral stone walls and entirely open on both longitudinal sides, thanks to the dynamic sequence of glass panels that can be hidden away inside niches.

One of the lateral stone walls supports the staircase leading to the upper level, with cantilevered steps. The opposite one borders and isolates the volume set aside for the kitchen and other service spaces, separated from the main constructed narrative.

“The pursuit of osmosis with nature and the highest degree of integration with the outside, in terms of views, the swimming pool, the terrace and the veranda,” says Marcio Kogan, “extends to the statue of the Buddha placed inside a space cut into the stone wall on the side of the entrance, visible from any angle. The clients embrace this oriental philosophy and the architecture tries to respect that and make it a part of the house.”

Thanks to the ‘built-in glass curtains’ the whole living area, with its uniform tones and natural textures, can be experienced as a seamlessly open space, an extension of the outdoor dimension. With respect to the humid tropical climate, this permits remarkable improvement of thermal comfort and ventilation.

Moreover, from a perceptive viewpoint the box of lime and wood, the paradise of the private zones (five bedrooms and a TV room) on the first floor, seems to be almost suspended, grafted into the open space below.

The master suite offers a fantastic view of the beach, and as in all the other bedrooms a continuous sunscreen system made with folding bamboo panels cuts down on direct sunlight while safeguarding natural ventilation, enlivened by balanced graphic patterns and a nimble game of open and closed planes, sculpted and redesigned by the violent light and shadows. Those of Brazil.