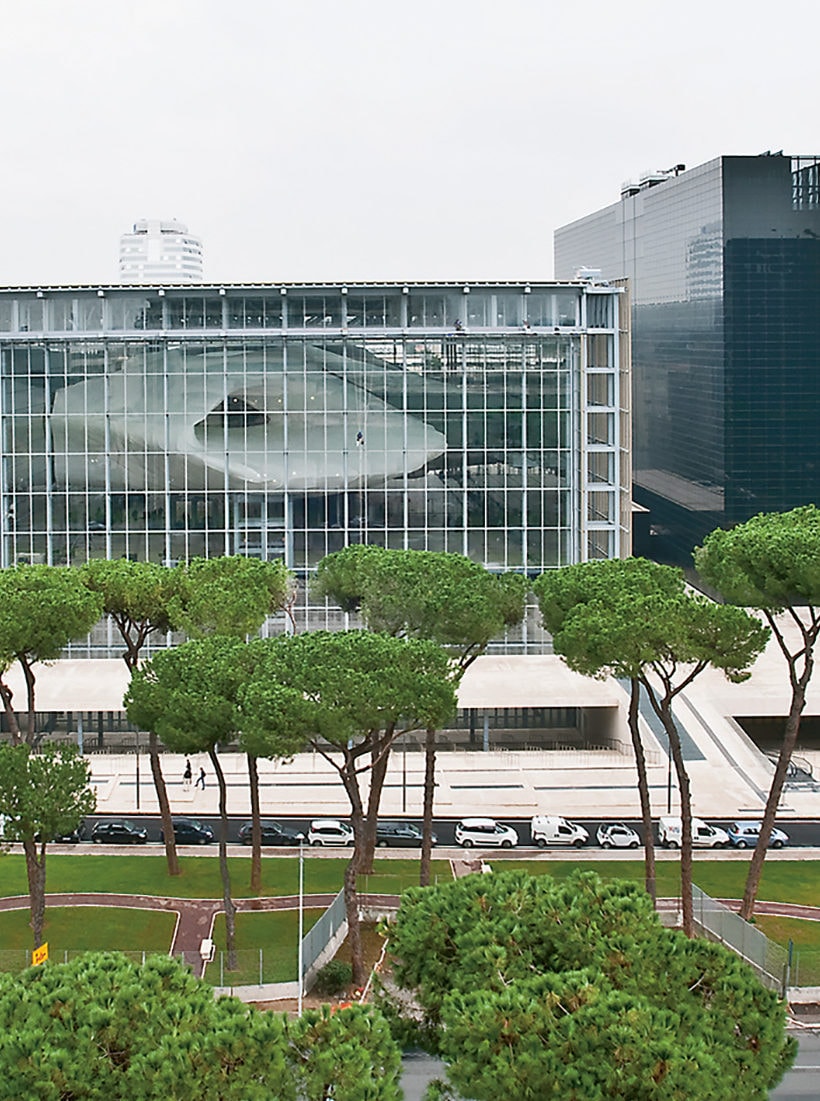 But that is the way of the world. Finally we can admire the finished Cloud, which is the nickname of the new convention center in the EUR district of Rome, created and completed by Massimiliano and Doriana Fuksas, who have overseen the process in their usual complementary way, in which she focuses on the details and the interiors, and he concentrates on the overall orchestration of the architectural artifact.

The volume establishes a dialogue with the context: the main entrance to the convention center faces Viale Cristoforo Colombo. This is the position of the Teca, the colossal parallelepiped (39 meters above ground and 48 meters underground; 70 meters wide; 175 meters long) with a structure in steel and concrete, a facade and roof with a double glass ‘skin’ that suggests the orthogonal lines of 1930s Rationalist architecture, typical of the surrounding urban fabric.

Inside, the volume of the Nuvola is the iconic feature, a steel structure covered with a microperforated Atex® membrane 2000 TRL, which as in a game of nested dolls contains, in turn, the Auditorium, with a mega-screen and 1800 seats, designed and produced for the occasion by Poltrona Frau, lined with curved panels of American cherry to guarantee optimal acoustics.

The new convention center has been designed to withstand earthquakes, with an eye on sustainable energy (from reversible heat pumps balanced by geothermal exchange with the water of the nearby EUR lake, to the photovoltaic panels on the roof and the system for collection of rainwater).

But there is not just the Nuvola, with its striking image like a film set; from the foyer dominated by floors in white travertine, a material of the Roman classical tradition that reflects the light that pours through the glass roof, mutable across the hours of the day, on a par with the nuances of the LEDs, shaded from blue to red, the narrative shifts to the other five levels, connected by escalators and suspended walkways.

In a jubilee of curved surfaces and tracks of gray steel, with exposed pipes and joints, the other spaces are configured with sliding panels, bringing new luminous effects that are never mere details, other environments to explore and to fill with life.

The same atmosphere offered by the building known as La Lama (The Blade), which contains a hotel on 17 floors (18,000 square meters, 439 rooms, seven suites, a spa and a restaurant). Welcome to Rome!

Massimiliano and Doriana Fuksas explain the Nuvola
“I am particularly fond of the Nuvola. In these long years of work, together with Doriana, we have gone forward thanks to our determination. And I wanted to defy the old adage by being a prophet in my own land. Rome needs major events and those who initiate them. This is the first work we have built in our own city. We have designed all over the world, from the airport of Shenzhen in China to the Public Service Hall of Tbilisi, and many other important projects, but never have so many years been required to complete a work: 18 years, almost the age of our younger daughter! Doriana and I would like there to be major art exhibitions in the Nuvola, conventions and initiatives of all kinds, making it become a museum open to everyone. With our work, we try to create places where people will be happy to gather, places that improve quality of life, stimulating emotions, in the belief that positive emotions can save the world.” Massimiliano & Doriana Fuksas