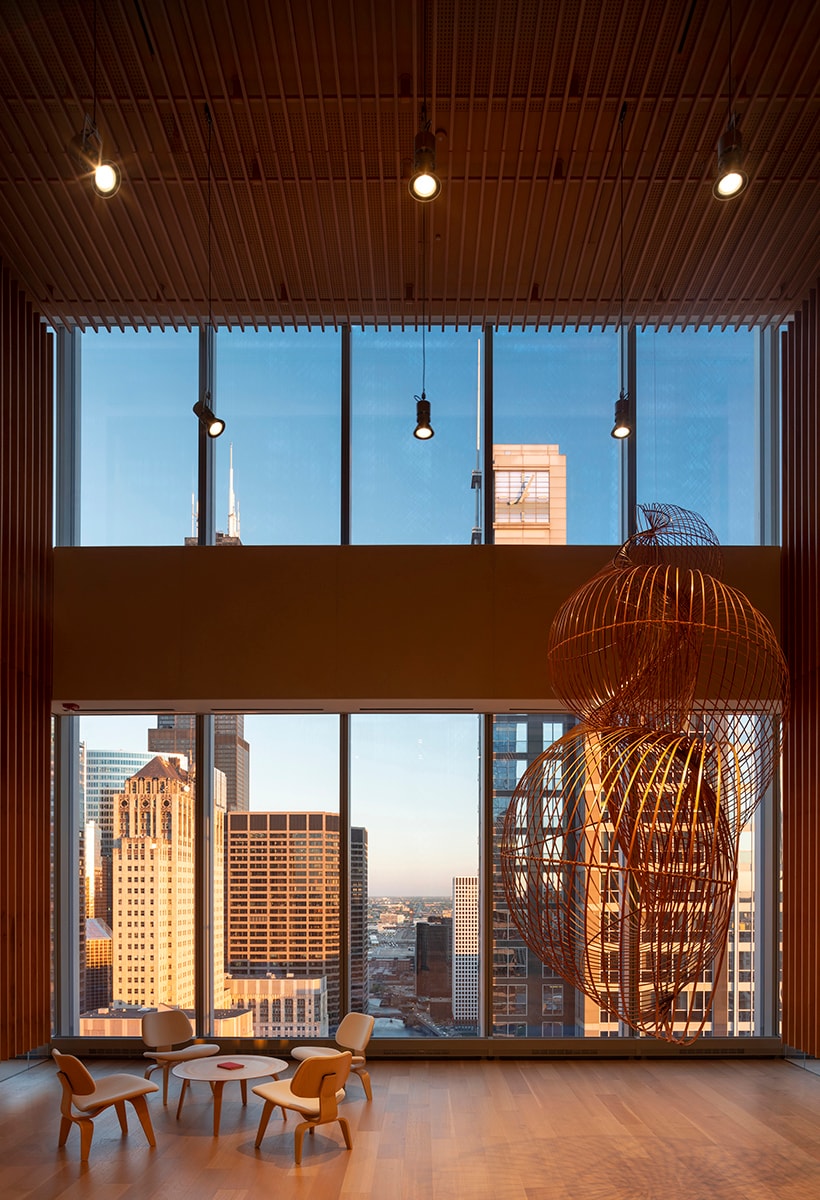 Alvisi Kirimoto: blues in the clouds

In Chicago, Rome-based studio Alvisi Kirimoto redesigns the 32nd floor of a skyscraper, creating managerial offices for a well-known international company by absorbing the urban grid below and its most intriguing surprises: first of all, art

In the former industrial district of the West Loop in Chicago, when the elevators open on the 32nd floor of a recently built skyscraper, where an area of 1000 square meters (out of a total of 2570) displays (integrated into everyday life) a fine collection of contemporary and oriental art, as well as archaeological relics, it is immediately clear that this high-altitude space for the executive offices of a major international corporation is no ordinary workplace.

This is a location for work up in the clouds, immersed in the transparency of full-height glazed perimeters – thanks to the typical curtain-wall structure of this building with a height of 224 meters – that offer excellent views of the nearby river and the urban grid below, absorbed in a different perspective.

Flexibility and transparence are the key concepts behind the internal layout designed by the architects of the Italo-Japanese studio Alvisi Kirimoto, based in Rome since 2002, in collaboration with CannonDesign.

°
Alvisi Kirimoto is an international practice that work in the field of architecture, urban planning and design. Founded by Massimo Alvisi and Junko Kirimoto in 2002, the firm stands out for its sartorial approach to design, “sensitive” use of technology and control of space starting from the manipulation of "sheets of paper". Dialogue with nature, urban regeneration and attention to social issues make its projects unique in the international architecture scene.

“From the musical structure of the blues, belonging to the culture of the city of Chicago, we took the concept of ‘tension and release,’ compression and spatial suspension. Thanks to the height of the 3.60 meter ceilings, we were able to imagine a narrative scheme that orchestrates episodes of great breadth and varying temperature, focusing on the input of the visual axes in a seamless dialogue with the city,” say Massimo Alvisi and Junko Kirimoto, whose background includes work with Renzo Piano and Massimiliano Fuksas, in a linguistic approach that mixes their different origins – occident and orient – with skillfully gauged proportions and touches of poetic handiwork.

The entrance zone makes the two environmental geographies of the interior immediately perceptible, juxtaposed with the central block of the building that contains the elevators, physical plant systems and services, against the backdrop of the continuous glazing: on one side, the reception area, on the other the ‘playroom.’

The reception zone leads to the more interactive functions placed along the southern facade: the meeting room, winter garden, exhibition spaces and restaurant, while the back, facing north, becomes the setting for the playroom, the private offices and other communal areas. 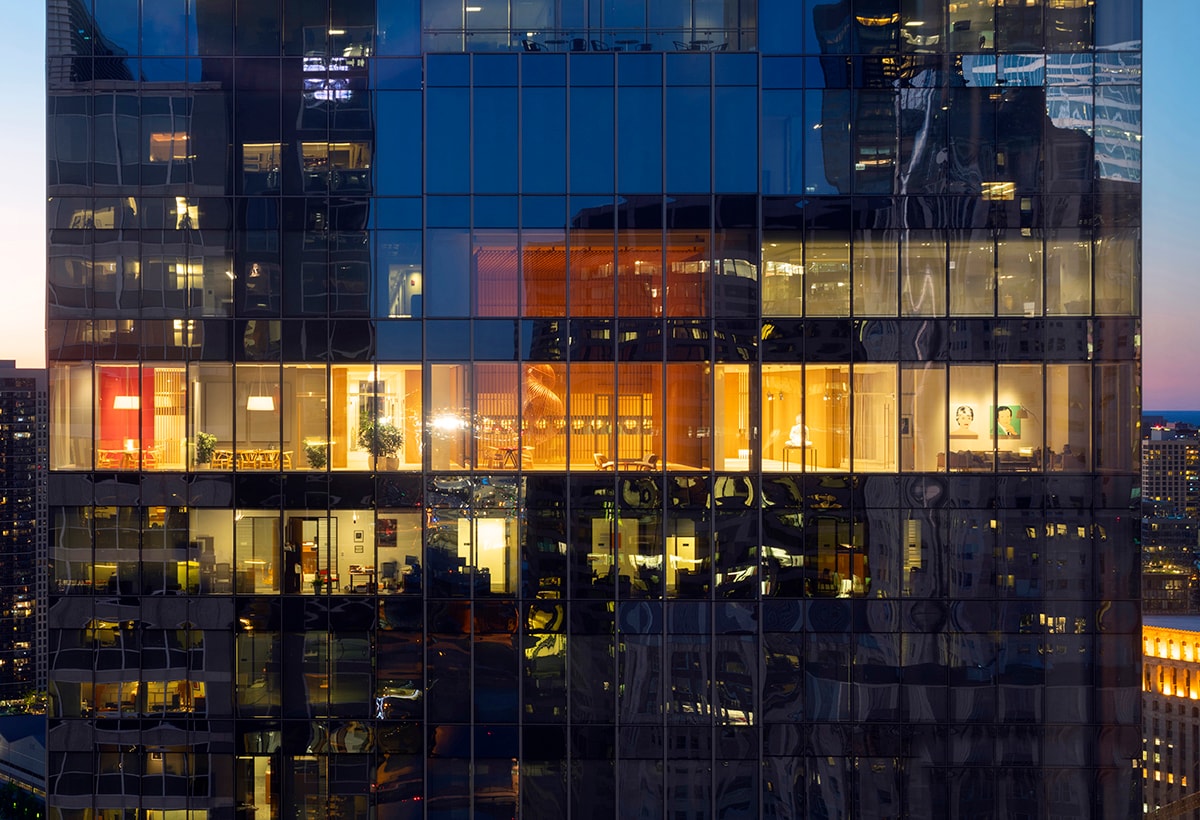 10
Nocturnal view of the floor of the recently built skyscraper in the former industrial area of the West Loop in Chicago. The interior design has been done by the Italian firm of Alvisi Kirimoto, with an approach of maximum transparency and fluidity.

This variegated promenade, in which every detail has been carefully studied, from the views to the custom furnishings and the lighting, exists in a dynamic relationship of full and empty elements, interpreted with a precise palette of materials and colors: walls in natural wood, glass full-height partitions bordering the various work islands, orange ceilings for the playroom, red panels on the gray walls of the restaurant, rust-color wallpaper in the entrance and total white for the operative zones, in an intense rhythm like a musical score that alternates suspended elements with impressive sculptural objects resting on the ground.

Every ingredient, with its own separate identity, contributes to the clear, harmonious overall composition of textures, horizontal and vertical surfaces. The winter garden represents the core of the project, and the perceptive feature that disrupts the whole: a two-story volume set aside for music, art, events, meditation and reading. 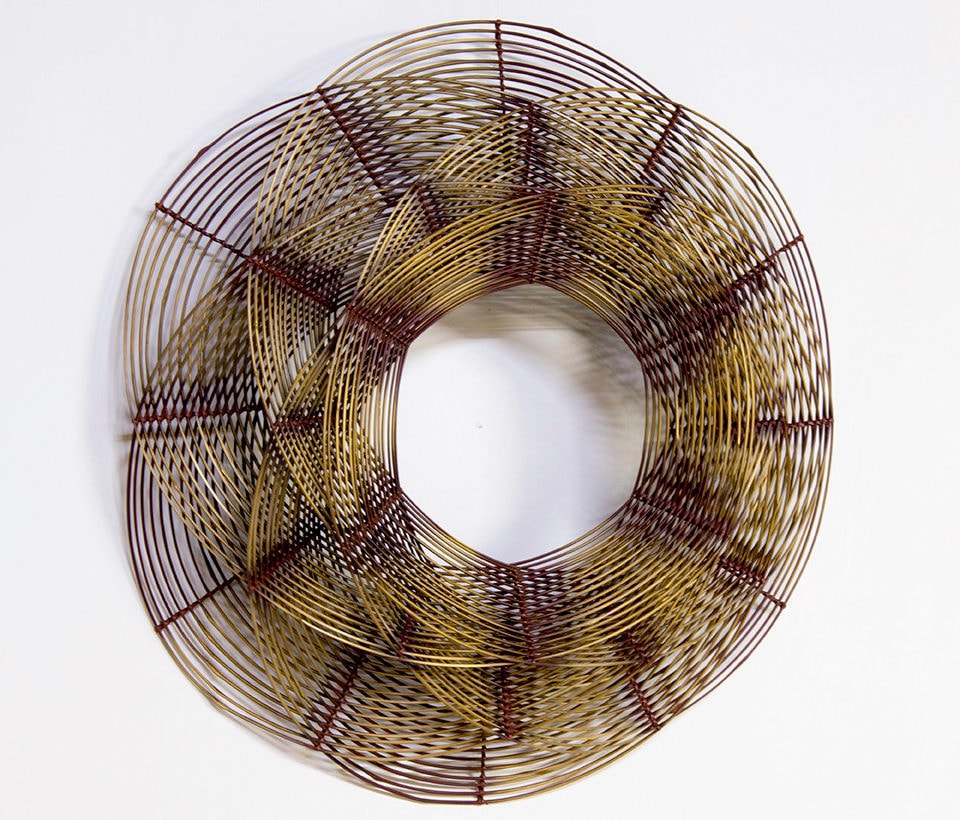 4
In this gallery, some works by Ueno Masao who created the large suspended bamboo sculpture for this project. Ueno Masao graduated from the Shibaura Institute of Technology with a degree in architecture and studied bamboo with Honma Kazuaki. In 1991, his work was included in “The 20th Contemporary Art Exhibition of Japan” at the Tokyo Metropolitan Museum of Art and Kyoto City Museum of Art. His work is part of the Ruth and Sherman Lee Institute collection. The artist picks madake bamboo in the mountains of Japan, dyes and lacquers the material, and finishes with gold leaf and gold powder, a technique he adapted from traditional wood artists. Tinged in gold, his pieces transform with shifts in light. Many of his ideas are formulated using computer-assisted design software. In this picture, Synchronizing ripple, 2015.

A box inside a box, glazed and luminous, lined inside and outside, from floor to ceiling, by a system of vertical wooden blades, suspended and staggered with great technical prowess to permit control of privacy levels for the settings inside and outside the enclosure, where the protagonists – depending on the vantage point – become the dissolve effects, rarified opacity, sensorial suggestions.

The staging organized by a bamboo sculpture hanging from the ceiling, a site-specific work by the Japanese artist Ueno Masao, and by the table finished in Japanese lacquer designed by Junko Kirimoto, becomes the crucial sign of the overall spirit of the project: linguistic reduction combined with a wealth of quality content, where the compliance with a functional program reaches the loftiest levels of detachment and contemplation. Beyond mere necessity, the dilated and rarefied atmosphere of an art gallery.

“
From the musical structure of the blues, belonging to the culture of the city of Chicago, we took the concept of ‘tension and release,’ compression and spatial suspension. Thanks to the height of the 3.60 meter ceilings, we were able to imagine a narrative scheme that orchestrates episodes of great breadth and varying temperature. "