The evolution of dwelling

What makes the deceptively simple concept of ‘home’ so difficult to get to grips with is its faltering and ambiguous relationship with the very different concept of ‘house.’ A house is a building, while home is an idea. Home has many emotional aspects – memory, ritual – but the most resonant of them is its intimate connection with our sense of self.

To be at home is to be able to be yourself. In our essentially narcissistic world, no quality is more desirable. As a result, the idea of home has become too valuable for the house to be left in sole charge of it. The office, the airport lounge, and the private members club are all turning into home-like spaces. We want to belong everywhere, which is actually the slogan for one of Airbnb’s advertising campaigns that was really about turning homes into hotels.

In Silicon Valley, the epicenter of narcissism, the selfie and the Instagram post, the whole point of Facebook’s sprawling Menlo Park headquarters is that from the inside it looks as much like home as possible. Like the Googleplex just down the freeway in Mountain View, these buildings are hothouses for creative minds that need careful nurturing. Those brains belong to the young and the narcissistic. They demand in-house bicycle repair shops to get their Pinarello fixed. They need beanbags and pizza windows; they need in-house resident artists. They need vegan food and tofu. They need to be able to interact with each other like crazy, all the time. 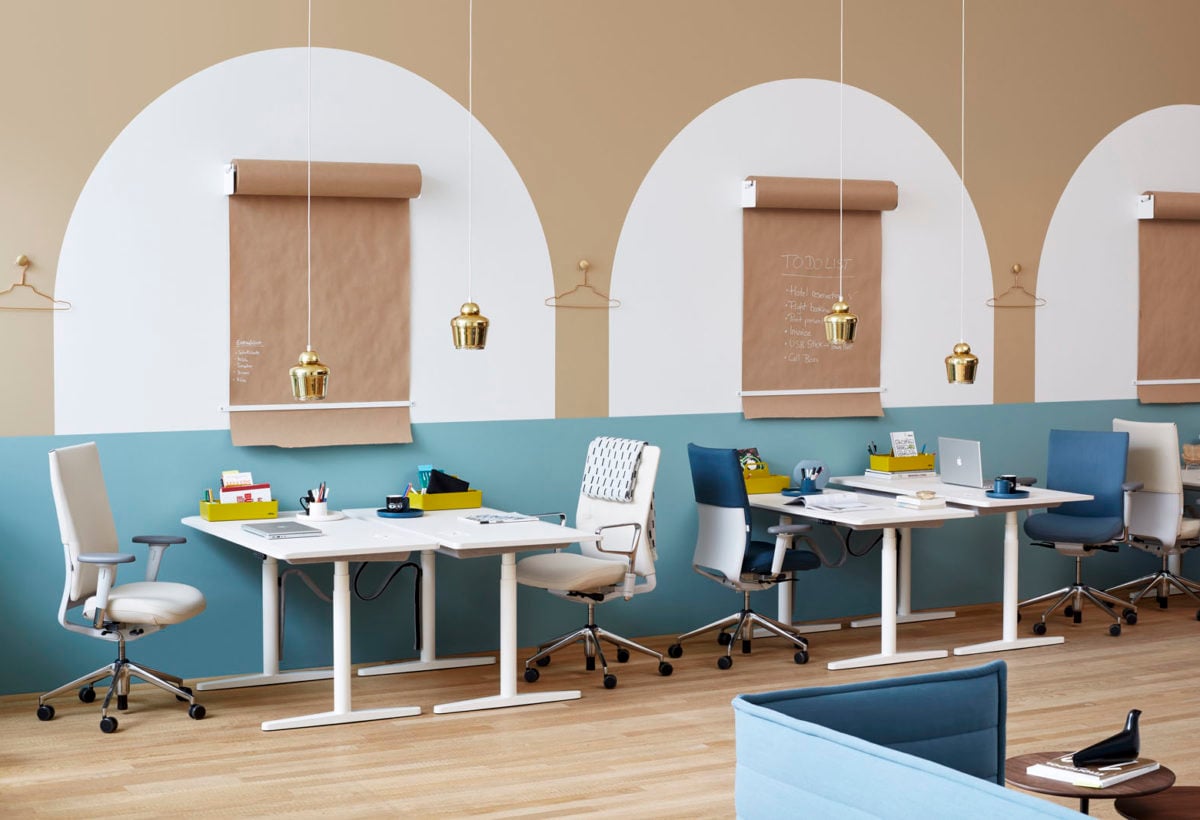 3
One of the three scenarios French designer Dorothée Meilichzon has created inside the VitraHaus at Weil am Rhein to narrate the idea of the office proposed by Vitra.

The digital giants are infantilizing their workforces, treating them as permanent adolescents, shackling them to the sofas and table football games that have displaced the executive desk, the drinks cabinet, the executive washroom and the corner office as the signifiers of the desirable workplace. It’s the same in the million square meters of so-called start-up space around the world managed by the eight-year-old company WeWork.

They are characterized by chairs that do not match, grouped at kitchen tables made from salvaged driftwood crowded with laptops. They are full of sofas, sofas and yet more sofas, that stand on parquet floors and loose rugs, and coffee tables, lit by mid-century modern chandeliers. There is music and beer and partying, and a gym. There is even a British rival to We Work that calls itself Second Home to spell out the message in the most unmistakable way.

The open question is whether all those sofas and table football games really are about allowing those who work on and around them to be themselves, or are simply intended to put them in the position of playing a part, just as the desk and the corner office once did. Do they in fact represent an actual home for an individual, or just a generic ‘home’?

Despite its atavistic associations with the hearth and the rituals of domesticity, what we understand as the home is essentially a modern concept. It emerged with the rise of individualism starting at the end of 18th century. It is the product of a constant struggle between fundamentalists of various kinds who saw the idea of home triggered by a radical change in circumstances as a chance to impose their sense of how life ought to be lived on others. For some it was a political or moral issue, for others it was a matter of business. Some were radical politicians, others were architects. And some were both.

They offered competing ideas, from communal living to the ideal villa, elaborate decoration, and restraint. These conflicts are now still being fought out with Pinterest posts and by Ikea, the furniture giant that in response to market resistance set out to change not its own products but the tastes of its customers. It asked the British to chuck out their chintz, and mocked designers with the Van Der Puup advertising campaign.

“
The digital giants are infantilizing their workforces, treating them as permanent adolescents, shackling them to the sofas and table football games that have displaced the executive desk, the drinks cabinet, the executive washroom and the corner office as the signifiers of the desirable workplace"

Willi Baumeister was an artist, not an architect. But his poster for the 1927 Stuttgart Wiesenhoff Siedlung with its terraces of white stucco flats designed by Mies van der Rohe, Le Corbusier, Walter Gropius and others is a shockingly powerful expression of architectural contempt for what he would have called a conventional idea of domesticity, though it was what most people would have seen asa model forhome life at the time.

"How shall we live?" he asks, and leaves us in no doubt about his answer. To judge by the blood red cross that he has splashedacross a photograph of a perfectly harmless looking Biedermeier interior, not like this. It shows a soft velvet covered sofa nestled close to a decorative fireplace, over which a handsome mirror has been placed. The room is lit by an elaborate brass chandelier. The walls are hung with neat rows of framed pictures; there are luxuriant floral displays in china vases on a platoon of low tables. All of them are damned in the eyes of Baumeister and his infatuation with the machine and the supposedly unsentimental attractions of efficiency and hygiene.

Baumeister put into a single image all that Adolf Loos was writing about at more or less the same time. He set a course that others would follow. Buckminster Fuller, for example, who mocked the Bauhaus for worrying about how the taps looked more than how to create a domestic water supply, is on the same page. And so was the acerbic English critic Reyner Banham, with his onslaught on what he called creeping furniturization. Banham went so far as to suggest without a trace of irony that the ideal solution to the problem of seating was an invisible column of compressed air. But there have been other voices offering a more permissive view of what home could mean, notably This is Tomorrow, the exhibition in London in 1956 at the artist Richard Hamilton’s celebration of the new affluence was a trigger for the Pop Art movement. 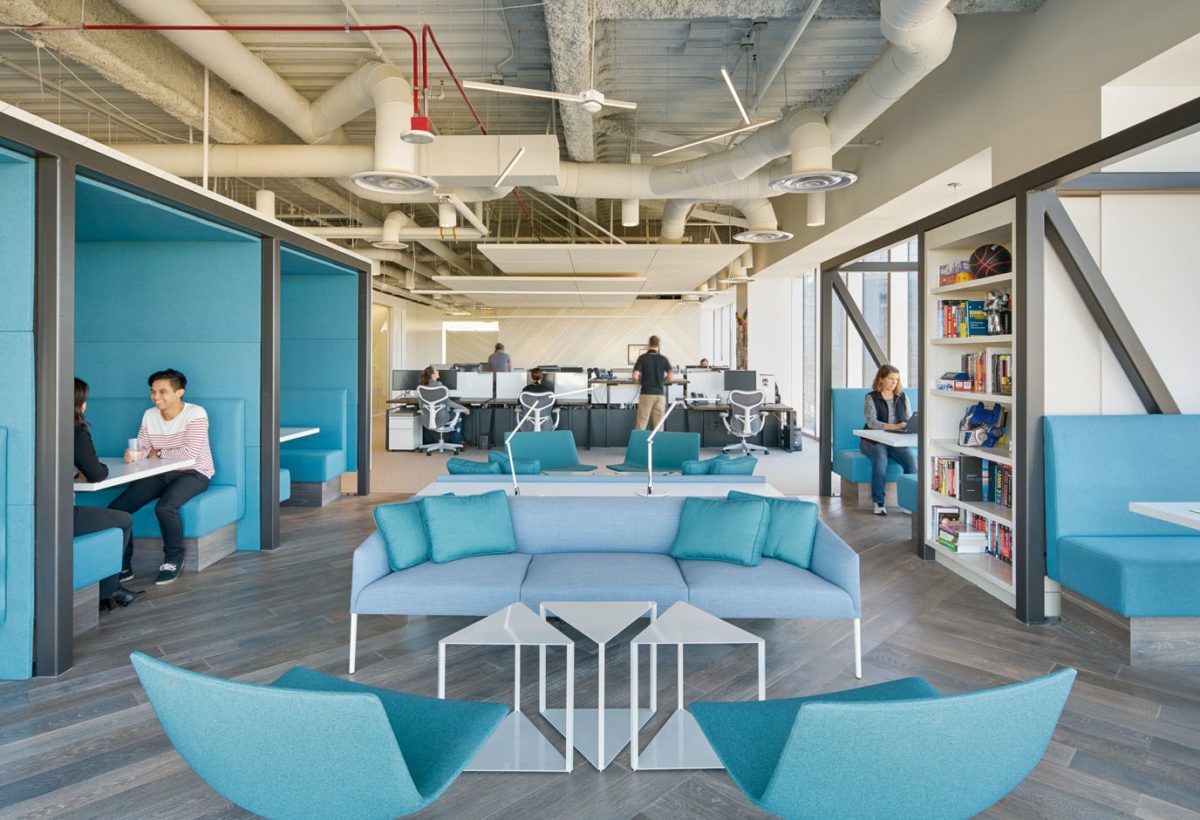 2
Photo Bruce Damonte - Arper has been chosen to furnish the lounge of the San Diego offices of Neustar, designed by Studios Architecture. The three-seater sofas from the Saari collection and the lounge chairs of the Catifa 80 collection, both designed by the studio Lievore Altherr Molina, bring functional quality to this hybrid space.

The idea that a house was a machine for living has reverberated back and forth from Le Corbusier to Margarete Schütte-Lihotzky and her Taylorite Frankfurt Kitchen. By the time of the "Italy: The New Domestic Landscape" exhibition in 1972, Ettore Sottsass had turned his modular concept for the Elea 9000 mainframe computer into the inspiration for a complete living system.

"Italy: The New Domestic Landscape" offered other ideas about the nature of home that walked a fine line between utopianism and satire. Superstudio’s endless grid abolished the city and turned home into a nomadic experience.

The question to ask ourselves is how much what once seemed like critical design has turned out to be a prediction. The Airbnb phenomenon could on one level be seen as turning Superstudio’s idea of nomadism into a banal reality, one with all kinds of unintended negative consequences.

We are at a moment when the question asked by Baumeister about how we live is as highly charged as it was in 1926. The impact of economic policies that have turned homes into financial assets unaffordable for many, technologies that have made so many categories of objects redundant, and demographic changes that have increased life spans but delayed the start of home creation by young adults, challenge us to re-examine the nature of home.

Are privacy, security and memory fundamental human needs, or are they reflections of particular moments in human history, to be discarded when they have lost their relevance? We tell ourselves that privacy is an essential part of human dignity, yet we are constantly posting images of ourselves with which we make public the most intimate aspects of our lives, and the Amazon Key project invites us to give strangers the power to unlock and enter our homes while we are away.

If we fill our homes with possessions that have no utilitarian purpose except to remind ourselves of who we are, and to show others how we want them to understand us, how can we do this in a world in which the utilitarian object is losing its relevance? We are confident enough that we must continue to refine our techniques to build more houses if we are to resolve the crisis of affordability that plagues affluent cities, and the chaos of the global south. But what we have much more difficulty coming to terms with is the evolving nature of home, and perhaps that is because we are no longer so sure about who we are when we finally escape the domesticated workplace and try to be ourselves at home.