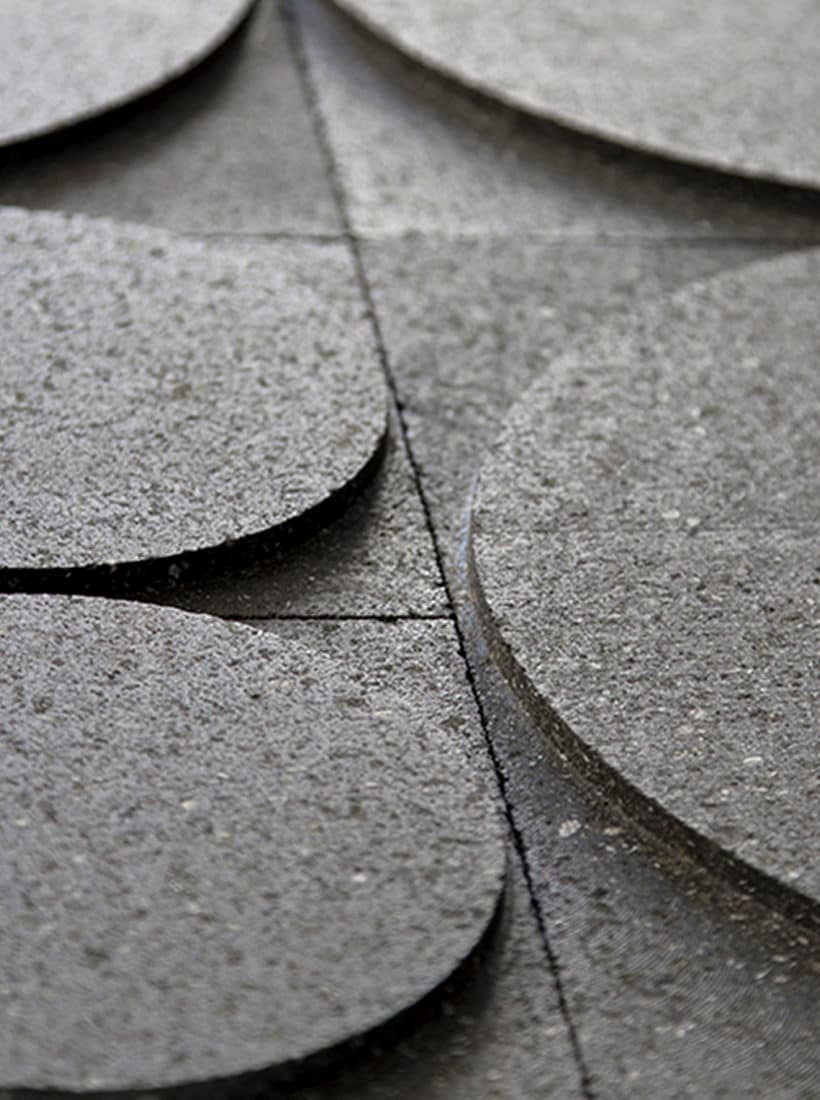 Nerosicilia
A brand of the Ragusa-based company Frama Mosaici, Nerosicilia has worked since 2010 with lavic stone from Mt. Etna using a patented process. Special burners at a temperature of 1300°C take the material back to a molten state.

The coloring is not done with glazes, but with glass powder recycled from TV monitors, placed on sheets measuring up to 300x80cm. The results are the macro-laces of the Ricami collection and the 3D patterns of BUKIaRilievo.

“We have introduced a concept of industrial crafts,” says Biagio Amaru, CEO of Nerosicilia, “or the ability to produce both one-offs and serial products. The two Sicilian art directors, Massimo Barbini and Giovanni Salerno, take part in product research and development.

The collaboration with outstanding Italian design firms like Boffi, Paola Lenti and Cappellini is proof that this approach on the borderline between art and design can make the difference.”

The company reflects “the geographic location of a dream: ‘nero’ (black) like recently cooled lava, ‘Sicilia’ (Sicily) as the source of it all. Being Made in Sicily helps us on the production level, thanks to local raw materials and local know-how; but it is problematic due to the distance of the island from the main international logistics centers.”

Made a Mano
It was founded in 2001 by the ceramics entrepreneur Rosario Parrinello, known as the ‘tailor of lavic stone,’ as an evolution of his family business La Bottega Calatina.

Made a Mano makes ceramics with lava clay from Mt. Etna, the exclusive source of the material. The natural or glazed ceramic slabs are decorated by hand by the master craftsmen of Caltagirone, updating an age-old tradition.

“Design gets us involved,” says Parrinello, “in the creation and optimization of new solutions that respond to technological and aesthetic needs. An objective unfortunately not shared by our competitors, who simply imitate what already exists and thus do not encourage growth through mutual exchange of ideas.”

Made a Mano is not only a brand Made in Sicily, but also a company that wants to express its Sicilian identity. “In Sicily,” Parrinello says with irony, “a little bit goes a long way, because the land offers a lot.

Since we are a people that has gone through colonization across the centuries, we have never managed to create a strong, unified character. We have simply tried to conserve what little we had, overlooking the many characteristics we could have had. But I think things are changing now.” (Photo Alberto Ferrero)

Orange Fiber
It is a company that produces sustainable fabrics from Sicilian citrus byproducts. Founded in 2014 by the designer Adriana Santanocito and the communications expert Enrica Arena, flanked by Francesco Virlinzi, Antonio Perdichizzi and Corrado Blandini.

The Orange Fiber project dates back to 2012 and the degree thesis by Adriana at AFOL Moda in Milan, focusing on research on innovative textile materials with reference to her native land.

The weave is the result of industrial squeezing of oranges, transformed into cellulose inside the Sicilian plant. The Spanish partner spins the substance into yarn that is then woven in Como.

“At the moment we have ready-to-print fabrics,” says Enrica Arena, “and we work in terms of co-design with the client, also because fashion houses have very specific needs.”

For the SS 2017 collection Ferragamo has used Orange Fiber fabrics with prints designed by Mario Trimarchi. “We can customize the weave by changing weights or patterns and the blend, or by working with printing, also using ink-jet.”

Regarding Sicilian identity: “the material is the heart, but we want to promote an idea of regional crafts, which treated as a system can become national excellence.”

Edizioni Precarie
Edizioni Precarie was founded in 2013 in Palermo by the designer Carmela Dacchille, later joined by Giulia Basile, with the idea of narrating the historic markets of the city through a humble, characteristic material like the paper used to wrap foods.

Based on in-depth research, gathering and archiving of papers used for foodstuffs, collections of desk objects and illustrated narratives have been created, all made by hand.

The project wants to bring out the undervalued beauty of everyday things, stimulating reflections on slower, more aware processes of production.

The paper used in the markets of Palermo speaks of a unique tradition: “Such variety does not exist elsewhere,” says Carmela Dacchille, “and it expresses the great care Sicilians put into food, as well as simple gestures linked to ancient ritual behavior.

We do not just make notebooks: those who own our objects also gain something of the histories of the places from which the paper comes. The creative work, in this case, becomes ‘sapurito.’”

Lithea
Lithea is a brand founded in 2008 by Patrizia Furnari and Fabio Fazio, in collaboration with the Messina-based company in the stone sector Mgm Furnari. The firm uses numerically controlled machinery to shape blocks of material, making stone a ductile, malleable material.

As Patrizia Furnari emphasizes, “the company, while remaining local, addresses and interacts with the world. A Sicilian proverb says cu nesci, arrinesci (those who leave have success).”

They have turned to designers like Michele De Lucchi and Marco Piva, who have transferred elements of Sicilian identity into contemporary languages. As in the case of the Isole collection by Marco Piva, for the bath and wellness, which makes reference to the objects found in the palaces of the Sicilian Baroque.

Nature, art and traditions of the island, such as that of engraved coral, silver, embroidery and weaving, are suggested in the 3D textures of the Nature (design Fabio Fazio) and Trame Mediterranee (design Marella Ferrera) collections.

“Through creativity, stone becomes a story of our culture,” Furnari continues. “In the hands of designers it reveals ‘sensitive forms,’ a communicative skin in constant transformation.