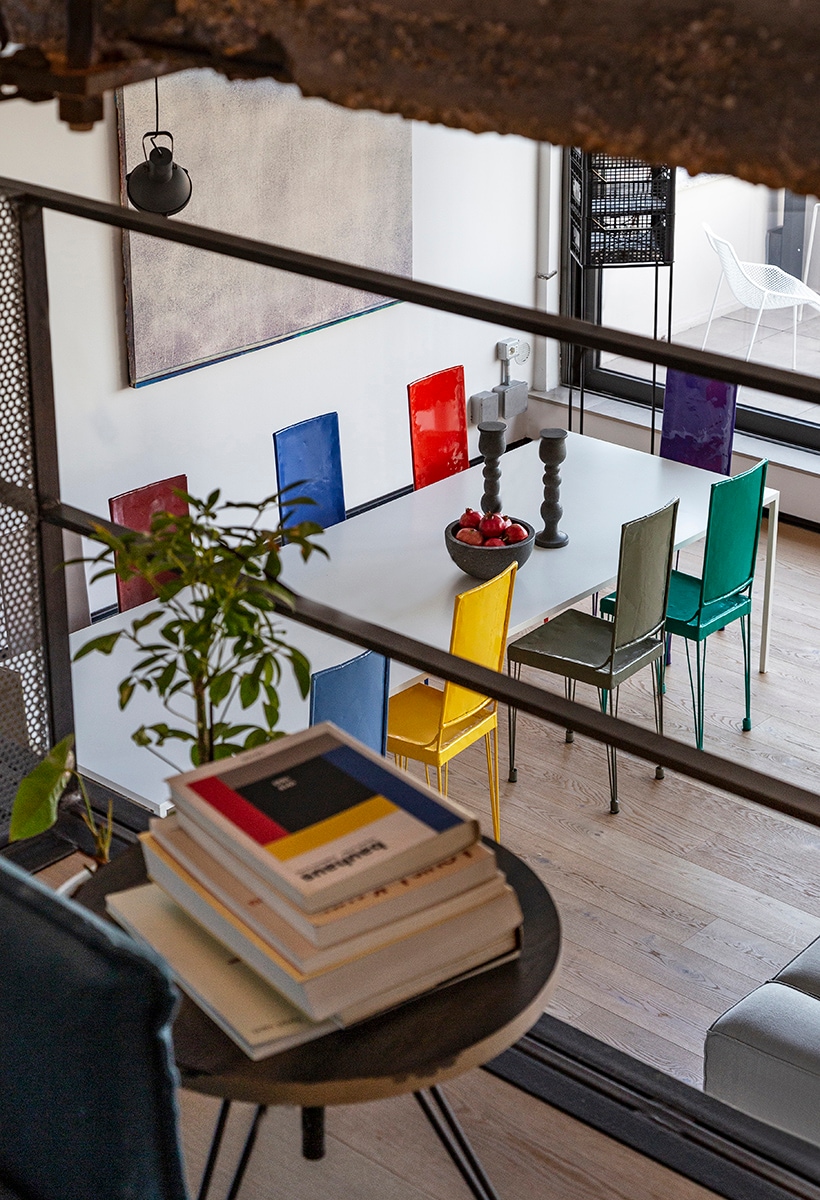 In a former warehouse in Rome, a loft conceived as a residence and exhibition space for a manager with a passion for art and design combines clean forms and geometric rigor, industrial touches and furnishings Made in Italy

A train speeds by. Slicing the panorama in half with the reflections off its metal armor, it leaves in its wake a tangle of tracks and an orderly, systematic row of buildings, interrupted only by the concrete tower of a water tank. We could be in New York, but instead this is Rome, on the eastern outskirts bordered by the Pigneto and Tiburtino districts. This area, for some time now, is known for its creative scene. As borne out by this open space inserted in a site of industrial archaeology that was once a depot for delivery vans, and is now a factory of artists, creative professionals and collectors, who have settled here to work and to live. For years the same apartment was the studio of Piero Pizzi Cannella, an internationally renowned painter, born in the province of Rome. Later it passed into the hands of a manager with a passion for art and design, who has made it her home, along with a gallery for exhibitions and cultural events.

The loft has a dual nature, public and private at the same time, and this dualism can be seen in the layout of the spaces, the fluid passage from one room to the next, which seamlessly communicate with each other. The project is by Studio Nema, founded in Rome in 2006 by Francesco Chiovenda and Matteo Grimaldi, who have extensive experience in the field of interior design and architecture, developed in New York and Paris by the side of Thomas Leeser, Mark Goulthorpe and the studio Zaha Hadid Architects: “For us, it was important to conserve the image of an artist’s atelier, the atmosphere in tune with the exhibition space, above all in a case like this one, where the personality of Pizzi Cannella is a very strong presence.”

6
View of the living area lit by a large glass wall that offers access to the terrace. Neowall sofas by Piero Lissoni for Living Divani and Zoe chair by Lievore Altherr Molina for Verzelloni.

The entrance is thus a gallery, a place for the latest acquisitions in the owner’s collection, while ample areas are set aside for the living and music zones, with a pianoforte, a drum set and a guitar. From here, a large completely glazed wall opens the residence to the light and the unobstructed view of the city outside. The passaged to the kitchen also happens in a seamless way, while a short corridor with invisible wardrobes marks a change of pace, leading to cozier spaces as a prelude to the innermost functional part of the house, with the bedroom, bathroom, laundry, closet and pantry.

“
We have made a clear distinction between what was new and what already existed, respecting the identity of the building, but avoiding any type of formalism connected with the industrial style."

Art, design and music enliven the spaces, as elements of a narrative of objects that never loses its thread, tracing a multiform image in which the passions of the inhabitant, great or small, can always find room. Not an impersonal gallery without connotations, not an image space designed to impress, but an environment that sacrifices nothing in terms of livability, functional quality and comfort, open to simultaneous multiple uses, without conflict. The reinforced concrete of the building’s structure has been exposed, stripping off its layer of white paint, to bear witness to the stratification of alterations made over time.

5
The bedroom with the Plastic Armchair by Charles & Ray Eames for Vitra and the Projecteur 165 Clip light by Le Corbusier for Nemo Lighting; the custom staircase leads to the mezzanine level.

Past and present can coexist, as parts of a single poetic Studio Nema reveals to the observer: “We have made a clear distinction between what was new and what already existed, respecting the identity of the building, but avoiding any type of formalism connected with the industrial style.” Far from stereotyped languages, the project harmoniously blends atmospheres usually seen as antithetical: industrial and bourgeois, public and private, contemporary and classic.

“
For us, it was important to conserve the image of an artist’s atelier, the atmosphere in tune with the exhibition space, above all in a case like this one, where the personality of Pizzi Cannella is a very strong presence."

Hence the typical elements of the industrial style take on new meaning: the vertical lines of the white corrugated sheet metal and the horizontal lines of the fair-face concrete beams generate a geometric rhythm with an Art Deco tone, matched by the great care that has gone into the details and the custom furnishings, which make this interior a refined project that takes its distance from any type of mannerism.