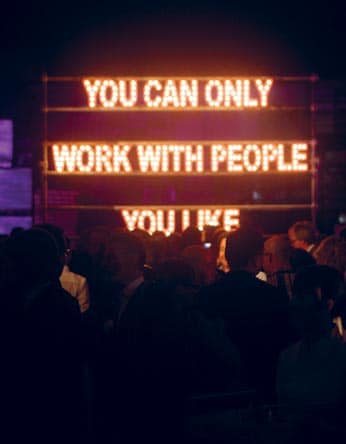 “Milton Glaser said: You can only work with the people you like.

We have decided to make this our motto, summing up our approach to design, where people, human relations, affinities of mood and thought, come before anything else.” Massimo Orsini is very clear on the subject of Mutina, the brand in which he decided, in 2005, to invest the experience gained up until that point in his family business, wagering on a different vision of ceramics that didn’t fit into the traditional entrepreneurial model. Everything inside the headquarters speaks of this absolute clarity of viewpoints, which even prior to taking the form of a very successful collection of products is expressed in a sensibility, a way of being lucidly perceptible. Let’s start with the place: Fiorano Modenese, the heart of the Italian ceramics district, a concentrate of industrial sheds that emanates an industrious desire to get things done. Already, from a distance, the Mutina headquarters stands out from the rest of the anonymous buildings: not with the shouted tones of fashionable architecture, but with the sober, intellectual rigor of its constructive systems developed by Angelo Mangiarotti and applied here, at the start of the 1970s, by a student of Carlo Scarpa. “I saw this building,” Orsini says, “and I immediately liked it; it ‘spoke to me’ even before I knew anything about its noble history.” It was precisely here that in 2005 today’s president of the company laid the groundwork for its adventure, involving three former colleagues who were also good friends: Giuliana, Emanuele, Michel. With them Massimo, shares an ambitious dream: to make ceramic not a decorative facing material, but an integral part of architecture, a vibrant surface in space, a true design material capable of bringing unusual perceptive qualities to the environment in which it is used. Hence the choice of eliminating color and the traditional aesthetic codes of tiles. The reference points come above all from the world of art, since Orsini has always been an avid art collector: the minimalism of Carl Andre, the color field painting of Mark Rothko, the poetic chromatic abstraction of Agnes Martin. But also modernist design, represented by the “less is more” dictum of Mies van der Rohe, the good design commandments of Dieter Rams, the expressive versatility of Bruno Munari. “We decided to start with the pure material and the possibilities offered by the most modern technologies and crafts techniques to experiment with its expressive potential, as had never been done before,” says the president of Mutina. “But to do this we needed the vision of a designer we felt was close to us in the type of research conducted in his or her career. We knew who those designers were. They had never worked in the world of ceramics – that was an important factor – but we had always admired their coherent ideas and visions. We turned to them, told them about our dreams, explained that it was possible to make a true design project with ceramics. We never set out with a specific goal or a preset plan, but from a process of mutual knowledge. Then the ideas came in a very natural way.” The designers were Patricia Urquiola, Tokujin Yoshioka, Rodolfo Dordoni, Ronan & Erwan Bouroullec, Edward Barber & Jay Osgerby, Raw Edges, Inga Sempé. Outstanding international names, who starting in 2008 have created – for and with Mutina – a series of collections with a forceful conceptual approach, revolutionizing the identity of the material and its use in interior design. These protagonists who have contributed to make Mutina a success and a case history of the new generation of Italian design, are featured in seven videos that do not talk about products, but narrate seven stories of exchanges, human relationships, elective affinities. The videos do not have a particular plot or theme. The come from a series of non-institutional questions on the relationship between the designer and the company. The presence of answers only, the fresh approach to the spontaneous, almost casual editing, results in a choral way of thinking, not a list of personal portraits. “I remember,” Orsini concludes, “the first appearance of Mutina at the Salone del Mobile in Milan. It was 2012, and we had a lot of fears about doing it. To banish them, we asked these great professionals to come visit us at the stand, in the same moment. Everyone came. It was a magic moment, an amazing atmosphere, reflecting the work done, but above all the human relationships that had developed. This is what I want to say about Mutina, and what I hope Mutina will continue to represent.”