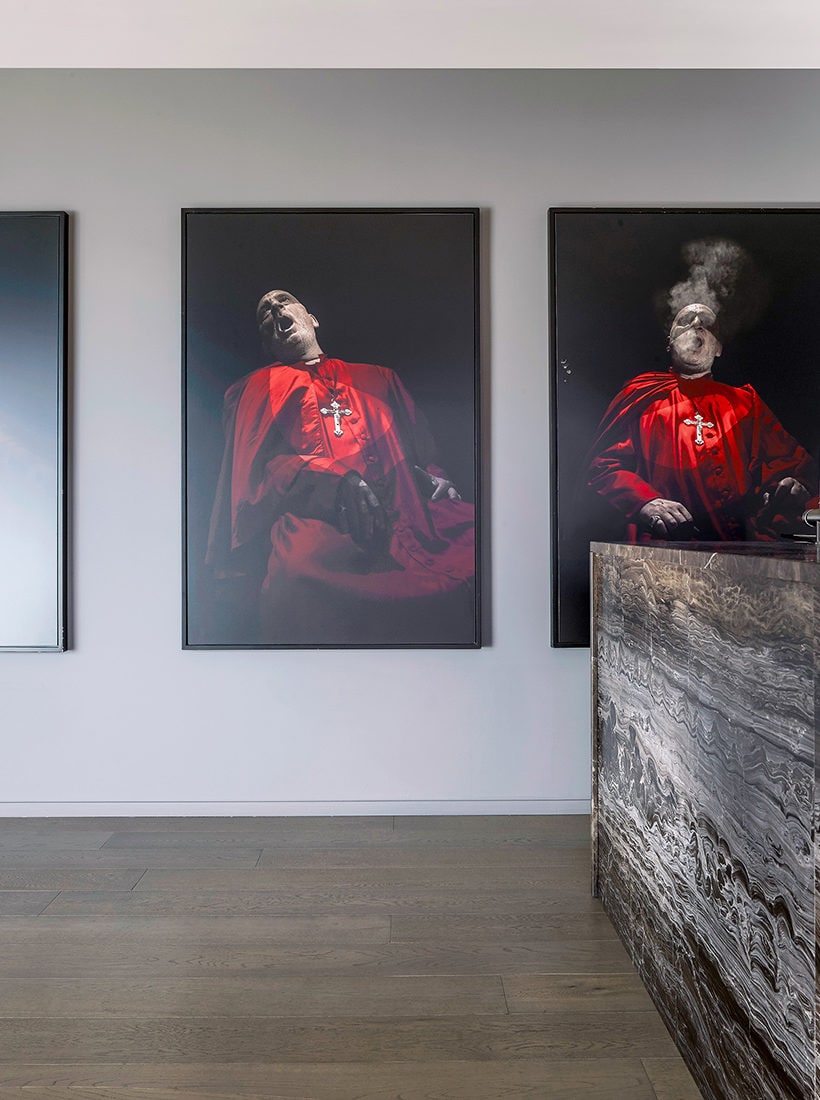 Carlo Colombo, tireless. We caught him prior to takeoff on a flight to Miami and asked him to tell us about this latest ‘exciting but exhausting’ international project.

A large penthouse (about 300 square meters) on two levels in the heart of Zurich, Switzerland, with great views of the lake and an amazing contemporary art collection.

This was a cue to think about certain evolutions of his intense career and of his activity as a designer (by now he has almost reached 1000 pieces created, to date, for the major producers in the design sector), increasingly joined by work as an interior designer. Colombo has never made a mystery of the fact that he sees no differences in approach between product design, interior design and architecture.

He works by reduction, by progressively removing things, transforming the essence of an object, a space, a volume into forms and materials. “Tactile and visual experiences,” he often calls them, “precise and concrete to the millimeter, in keeping with the logical and functional relations set out in the briefing.”

But in this new private theater of life, built from scratch, we can see something more on the structural-systemic and compositional plane, and in the spatial layout down to the scale of the smallest details. A warmer atmosphere, of greater empathy, far from the sophisticated, sober, detached spirit of the past.

Is this a more mature vision? What has made the difference?
“The presence of objects of to which the owner is attached, remarkable objects indeed, because they are works of art by Luigi Ontani, Mario Schifano, Mimmo Rotella, Andy Warhol, Matteo Basilé, unique, authentic elements of polarization. Their figures, colors and densities stimulated me to ‘paint a fresco’ that would be a radical take on the visual and tactile interface, assigned to the facing materials of walls, ceilings and floors, and to the contrasts of light on surfaces.
The project took form precisely in relation to these contents, and their dialogue with the container. You don’t always have a chance to put an Ontani in the entrance, a Warhol in the living area and another in the bedroom zone, works by Rotella and Basilé in particular places. It was necessary to carefully balance the parts, also in terms of aesthetic suggestions and narrative factors.”

A custom-designed mise-en-scéne, in short, where the external landscape becomes a sort of counterbalance and backdrop for the spaces, framed by the rhythm of large windows. This too is a condition of privilege, but also difficult, because the place in itself brings bright light to the paintings and interiors. How did you cope with that?
“Light is the natural source of the house, comparable in its nudity to a glass box that is permeable at 360° thanks to its fluid, open spaces. We have provided suitable screening with curtains and strategic closures, where the light was too much.”

These are the two upper levels of a building overlooking the lake. But the composition of the two residential floors seems to reference the extensive, rarefied dimension of a villa perched on a mountain, surrounded by an unexpected outdoor green area. Is that the case? How is the house organized?
“In effect it is curious. You can arrive from a secondary entrance against the mule trail on the uphill side, and have the clear perception of being suspended in the void. But you can also enter from the elevator that opens directly in the living area, revealing the visual continuity of the duplex. Above, there are the guestroom, the large closet zone and a service area (laundry and bathroom); below, the master bedroom, the living area (actually two of them, one for conversation and one for watching TV), the dining room and kitchen, another bathroom and another small zone for guests. There is also a long balcony faced by all the main rooms, a mountain belvedere and a garden on one side, and the lake on the other.”

To grant volume to emptiness, to the paths of use and living… which are the custom-made items that represent this goal?
“Undoubtedly the clear volume of the internal staircase, in raw reinforced concrete, a fulcrum of essential geometric design around which the rooms gravitate; but also the bathrooms and the kitchen, customized with a specific range of materials and colors, in terms of consistencies and finishes.”

What sensation did you want to convey to those who enter the house?
“A sensation of peace, wellbeing, serenity, harmony, colors, forms, layout, proportions; the idea that every move you make re-establishes a correlation between one space and the next, in a continuous play of reflections, contours, lights, the gray tones of the walls in pietra serena or painted plaster, the contrasting warmth of the oak floors, in a particular almost burnt tone, virtually interrupted only by the presence of a carpet. So you can feel the vital force of art and its protagonists, everywhere.”