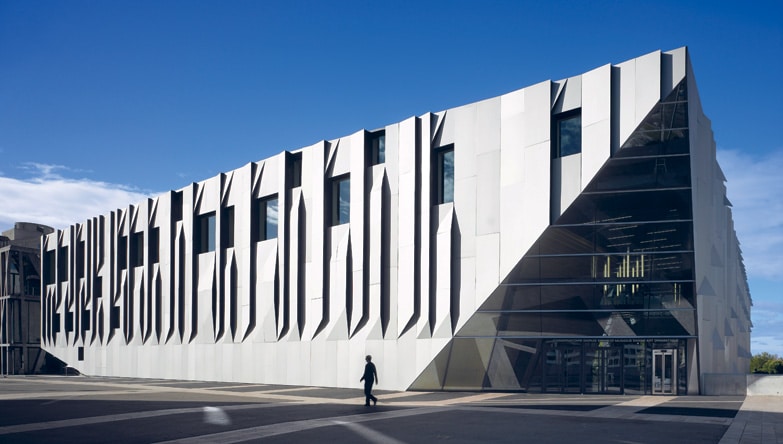 In praise of light

In praise of light

Next to the Pavillon Noir by Rudy Ricciotti, facing the complex of the Gran Théatre de Provence by Vittorio Gregotti, the new Conservatory of Music and Dance named for the French composer Darius Milhaud (1892-1974) completes the urban design of Esplanade Mozart, the central axis of this part of the city’s cultural forum.

Designing the external enclosure of this building, Kengo Kuma has worked with a single material, aluminium, to produce the overall volume, a sort of parallelepiped that exploits the level shift of the terrain towards the garden. The building is sculpturally shaped in terms of its architectural skin and its perimeter, with forceful inclined cuts at the corners to create the main entrance and to produce an effect of lightness in the relationship with the ground on the opposite side. The surface of the facades, with its complex three-dimensional pattern, is a reminder of the Japanese origami technique, with protruding geometric shapes that create a fascinating play of shadows and reflections to underline the rhythm of the day and the colors of the seasons. As Kuma himself puts it: “The main elements of the facade are light and shadow, rather than aluminium. In this sense we were inspired by the work of Paul Cézanne, the great artist of Provence, together with the Japanese art of origami.” Shadow thus becomes the mutable material that designs and sculpts the image of the Conservatory in reaction to the intensity of the daylight. “In truth, no secrets, no mysteries exist: everything is the magic of shadow,” wrote Junichiro Tanizaki in his book In’ei Raisan (In Praise of Shadows, 1935). The cuts, the play of overhangs and openings, the vertical shape of the design of the main facade towards the pedestrian walkway and that of the more compact horizontal bands towards the garden, are also reminders of the rhythms of a musical score, its counterpoint, its systems, becoming a symbol and an apt architectural mirror of the content and activity of the building. In the internal spaces, arranged on an overall area of about 7.400 square meters, over 1400 students work in 62 classrooms, 15 individual practice rooms and 5 collective rehearsal spaces. The 500-seat concert hall, one of the few in France to be equipped for organ concerts, offers excellent acoustics, also thanks to the crafting of the architectural walls, the volumetric shaping of the sounding chamber, reprising the image of the facades. Other compositional solutions in the interiors reference themes linked to music, dance and theater, like the ‘pleated’ treatment of the design of the suspended ceilings and the internal facades of the foyer, with alternating protruding bands of pale wood. Kuma says: “In the Conservatory I have known the differences of the materials, the forms and shadows that symbolize the notes of a score, and the wide variety of musical instruments.”