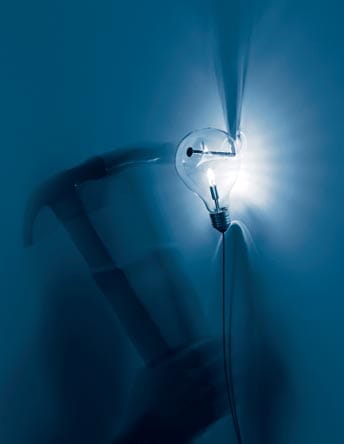 In praise of shadows

In praise of shadows

Davide Groppi is a special person, an individual and a trinity, producer, designer and, first of all, a poet.

Ready to be honest about himself, he says he likes to talk about design from a humanistic viewpoint. “I believe everything is there, inside words… And then images are important… It is good to talk about meanings and aesthetics. It is the crux of our work.” The catalogue of the company that bears his name, a choice that underlines his direct commitment, has a sober, mysterious image: it is a sort of book of shadows, like the famous one by the Japanese writer Junichiro Tanizaki. The fixtures stand out against dark backgrounds, thanks to the rays of emitted light that show their contours with great precision, conveying silhouettes with a three-dimensional effect. “Things exist,” Davide says, “if they narrate and depict themselves. I think photography is a fundamental part of design, because it expresses the truth of things. Objects have to be photogenic. Through images I understand the progress of a project, I realize the changes that need to be made. But at the start there are always words, even prior to the ideas.” “When I design,” he continues, “I always start with the name with which I try to identify the poetics of the object I have in mind. The form is always the inevitable consequence of the concept the name expresses.” Flanked by his brother Michele, head of sales, by Omar Carraglia, who has designed many of the fixtures, and by Alessandra Dalla Giovanna, in charge of communication, Davide Groppi plays a direct role in the definition of a tailor-made vision of lighting. He calls his production “fitted light.” His goal is to provide clients with lightweight, simple and poetic things, capable of “prompting wonder with less.” Wonder with less might by the motto of his company, which now employs 20 persons and in 2014 actually won two Compasso d’Oro awards, one for the Nulla model, the other for the Sampei lamp. His role is like that of a filmmaker, who tries to bring consistency to the screenplay, while reserving the right to surprise people. He was born on a summer day in 1963; he learned from his father, an electrical engineer, a man of humble origins, with a taste for beauty and for things well made. He started working in 1985 as a mechanical draftsman, and then began to construct and sell lamps in 1988, from a small workshop in the center of Piacenza. “In 1994,” he adds, “I had the good luck to meet Maddalena De Padova, who inexplicably decided to buy 40 units of my Baloo model, a paper lamp, and to display them all together in the showroom on Corso Venezia in Milan, during the Salone del Mobile. That was a very important moment, when I realized I might really be able to achieve what I had been struggling to do. The other person to whom I owe a lot is Roberto Gavazzi, who put my fixtures in the Boffi catalogue and hosted me in his showroom in Cologne during the annual furniture fair, introducing me to major worldwide distributors.” His production has an understated language. “I prefer not to disturb,” he says, “I always think lamps should have qualities that seduce, in an elegant, discreet way.” He believes that light is to space as punctuation is to phrasing, the part that determines the rhythm. That has masculine and feminine qualities, corresponding to different moments, capable of coexisting in harmony, through adjustment of intensity. “Oscar Wilde,” he remarks, “said that when the light is stronger the shadow is blacker. Shade is the other face of light, it belongs to its poetics and permits knowledge, as Plato said in the story of the cave, thanks to the projection of the contours of things onto the walls.” He thinks the icon of his catalogue is the Nulla lamp, close to the idea of light without a source, a model capable of accentuating sensations of mystery and disquiet, sensations like those of the tenth, unfinished symphony of Ludwig Van Beethoven. He also mentions Miss, designed by Omar Carraglia, which produces a lighting situation like that of Caravaggio; Moon, a suspension lamp in paper that sends out soft, very feminine light; and Neuro, a graphic revisitation of old systems. Crafts and industry coexist in his company. Conflict is a favorite theme for Davide, who believes it generates beauty, as Heraclitus said. He does not believe that design is an exact science, but a service capable of bringing added value, “to improve the world with beautiful things made with as little as possible.”