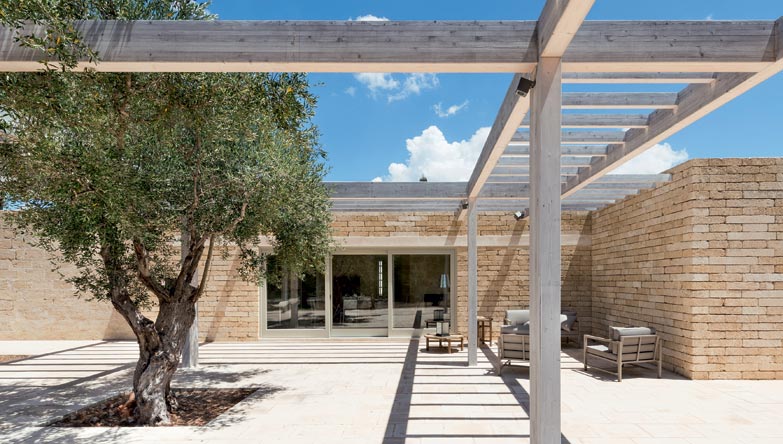 We’re in the lower part of Salento, near Salve, a few kilometers from Santa Maria di Leuca and the sea, in the buen retiro of Massimo Iosa Ghini, internationally acclaimed architect and designer.

Far enough from town to feel like we’re in the countryside, in the midst of nature: life, silence, wind. As a globetrotter, Iosa Ghini has chosen this corner of Apulia as a vacation spot for his family. “Milena (Mussi, ed.) took an active part in the project,” he explains, “because we picked up on Alberti’s idea that before building you need to spend at least one entire day in a place (more than one day, actually, in our case), absorbing awareness of this red land, its pale stones, age-old olive trees, cuisine. The place has its own metabolism. An ideal archetypal dimension for regeneration, easy to reach, also during the week. I wanted the setting I created to be a part of the whole: integrated, springing from the same rock on which it stands, discreetly nestled amidst the existing trees, the twisted trunks of the olive groves, open to a relationship of indoor-outdoor osmosis.” The architecture of the newly built house has a single level, on a lot of more than one hectare, surrounded by majestic olive and pine trees, the typical local vegetation. It is beautiful because it is essential: precise in its lines, with a modernist flavor, an incisive, light figure of pertinent order and proportions, with a rugged materic character that recoups local constructive traditions. And it is virtuous, because it has an ecological core of the latest generation, conceived to optimize resources and costs, thanks to the use of both passive control (sunscreens, low-emission glass, green pergolas, use of natural shade from the trees) and active control (photovoltaic panels in off-limits zones of the roof) This is the most surprising aspect, as if in a relaxed context the maestro of the Bolidista movement were unable to avoid the experimentation that is part of his spirit, balancing it with respect for the site and a taste for the modern. “It’s my job,” he says. “I carefully studied the path of the sunlight and the way the earth, in March and April, is covered by shrubs flourishing in the part sloping towards the sea that is visible on the horizon; I studied the cycles, the wide range of temperatures: very dry in the summer, very humid in the winter. I listened to the suggestions of local architects and builders who explained how to use native materials.” The design choices were the result of this careful analysis. The plan, based on the image of the Salento masseria, is designed to incorporate the roots of the existing trees. The flat roof, partially set aside as a solarium with access from an external staircase, has become a panoramic viewing point to watch the countryside and the sea. The constant relationship between indoor and outdoor spaces is underlined by the use of large glass partitions with slender metal casements: six meters in the large living area, facing south and placed in a central position, surrounded by four bedrooms with their own vestibules and baths. To the left, there is a hortus conclusus, open to the outdoor living areas. A path in smooth cement connects the house to the only existing independent volume: a pajara, restored and conserved, now used as a guesthouse. The materic-chromatic choices include local Chianca stone for the outdoor paving, made of crushed rock and mortar with a shiny resin effect, in pale, almost white tones. Inside, the floors feature large rectangular panels of porcelain stoneware, seamlessly installed, in the same colors. “I didn’t want to run the risk of leakage inside: Chianca stone is fascinating, but it cracks,” Iosa Ghini explains. For the perimeter walls, in certain zones with dry masonry or lime finish, the rubble masonry technique has been applied intensively, adding depth which helps to screen out the heat in the summer: on the inside the walls have Acquarica tuff in a standard measurement (35×70 cm), with an insulating felt panel in the middle and more tuff on the outside, this time cut in half to obtain a sort of elegant slatted pattern that reminds us of Wright. The pergola zones have wooden structures treated with acid to become almost white, and reed canopies to filter the bright daylight. Blended by the dominant but not homogeneous white tone, bordering on shades of rope and gray, the same materials and colors return in the interiors. The frames of the doors in painted wood, made locally, for example, are all gray. Lecce stone is used for the fireplace in the living area, a catalyzing, emblematic, essential figure. There are few decorative touches: a few crafts objects, some favorite design pieces. Like the table designed for Bonaldo that introduces a strong element of contrast with the three-dimensional ‘scribble’ of its base, accompanied by chairs in treated oak produced in Friuli, or by a divan by Moroso. “The absolute protagonist of the domestic scene remains the incisive light, inside and outside, with its clear, precise shadows,” Iosa Ghini says. What more could you ask for?