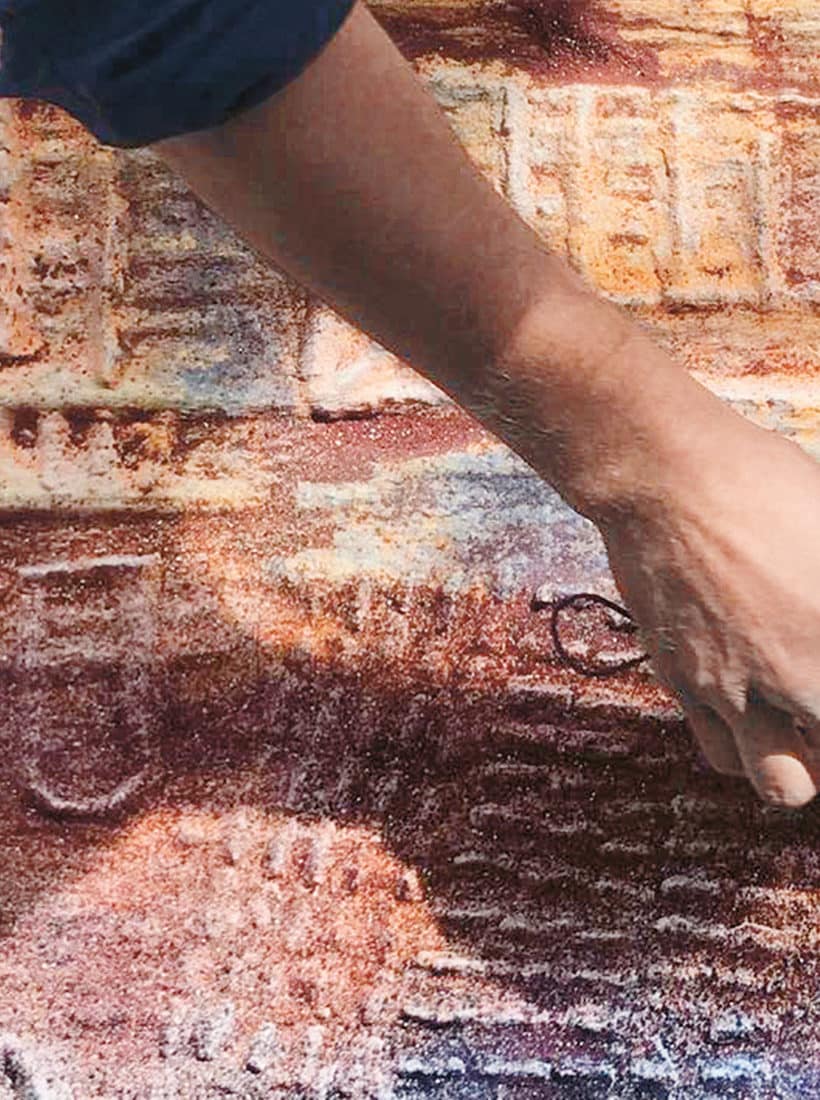 A visit to Water, Air, Light, the recent exhibition by Bijoy Jain at Assab One, the well-known Milanese art center of Elena Quarestani, offered the chance for a 360° interview with the award-winning Indian architect born in 1965, trained in Great Britain and the United States, founder in 1995 of the studio-laboratory Mumbai.

Water, air, light, but also gravity, balance, dynamism, lightness, transparency, material and color, are the key terms of his linguistic expression, each central in its own way to the creative process of inhabiting space.

What has the most to do with your work?
“Emotions, first of all. Everything comes from nature and is able to return to it. Man in nature or nature in man: this interests me. I’ll explain with an example. There was a religious festivity  every years in India, a landscape of structures made of bamboo tied with cotton cords, or goat intestines, while the joints are filled with clay or mud. At the end of the ceremonies these structures are dismantled and put into a river, a lake, into water.
The whole thing dissolves, the mud vanishes, the cords break, they return to the earth. And the cycle starts all over again the next year. Architecture, art and design are containers of life, a representation of the physical nature of the intangible.
This is why I think of these spheres of disciplinary reference as boundaries we have put there, prejudices that prevent us from grasping the essence: space and time. But we can understand space, which is always different because it is alive, if we relate to it in a conscious way, through the senses.”

What changes, then, in the approach when you are involved as an artist, not as an architect? “Nothing. The methods of research and the production processes are the same. The art is research for the architecture and the architecture is research for the art. Both trace back to the way we observe, perceive, re-elaborate. For me man (not the ego) is always at the center, and the idea that we are matter, we use to body to make something, and the process informs what comes out. We incorporate energy in a building or an object. But also when we prepare food, or take care of animals, we develop a project that is part of a larger whole.”

Specifically, what coordinates did you think about in the exhibition Water, Air, Light?
“I asked myself how phenomena can be absorbed and consumed, and about our interaction with time. Making these objects was not a pragmatic solution to a problem. But it permitted me to observe my thoughts and the things I was seeing. With a gaze open to discovery. The surfaces of these objects and their consistency originate in a tangible relationship with the material, and they suggest the inner desire to mingle with it.
Then, through the dimension of the movement of their bulk, weight and density, I explored the relationships between the elements of which we ourselves are made, and everything that surrounds us. A context in continuing transformation, a continuous flow. Civilization is built on liquid foundations. The world and the culture are in constant movement. There is a language that is constantly written and pronounced around us and with us. The relationship with the physical nature of the hands and gestures in space becomes a dialogue with the matter of a thought. Does that get the idea across?”

Certainly. But what are the questions you ask at the start of a new project?
“I try to understand myself as a presence in a specific landscape, which has to give back the potential to exist independently from me or from the person who inhabits, or will inhabit, the imagined space. I look for a sensation of quality. Often it is not a logical process. I concentrate until the place becomes the medium to stimulate the direction of the gaze towards the genius loci; a center, in which new things are also permitted to enter.
In practice, I ask myself a fundamental question of negotiation. Architecture, in all its expressions and scales, remains an interface between earth and sky, for me. It is the way I balance gravity that gives it form. A representation of what it means to be human.”

There is something almost philosophical about this approach, that seems to convey a sense of the sacred. Is that so?
“The sacred, I believe, can be traced back to the absence or presence of water: sacred by virtue of its relationship with the origin of life.”

You have said that for you architecture is universal. As a designer, however, the way in which you imagine opening a door, designing a chair or the texture of a wall, will be different when you work in Europe and not in India, because the cultural background and the behaviors of the inhabitants are different. How can architecture be more inclusive and global?
“First of all I would say that we will never find a common ground between continents and geographies, but the center is still man, living matter, apart from his origin; his participation in what is done and above all in the way it is done. Technology can be transferred anywhere, it is the sensitivity that combines empathy, care and the idea of a community that makes the difference. Sensitivity can also be traced back to a material that embodies or reinforces something. Recently, for example, I have been interested in bricks, because 1.2 billion people live in brick buildings. And not by architects. Precisely the relationship these elements establish with the earth, gravity, weight, size, defines their way of being architecture.”

Do you believe that architecture is democratic and can work to improve the lives of people, as indicated by the socially committed Alejandro Aravena?
“Its foundation is democratic. Just like medicine and art. They share the same sensibility: empathy, or the capacity to observe and to identify with another situation or condition, to make an effort to protect it, in the hope of supplying it with what it needs to be itself.”

Who is your ideal client? How do you choose your clients?
“First of all it is word of mouth, and then it depends. Personally I am interested in anonymous architecture. Often it is the client who makes contact with me. We discuss things, and together we try to understand the project. On the basis of this, we decide whether to continue with a mutual collaboration.”

How is your studio organized?
“We are a collective of architect-artisans. We operate with the spirit of a workshop. The central team is composed of me and 10 or 12 very young people, from different countries. Then, for some projects in foreign countries, we collaborate with local bases.”

How did you discover architecture?
“It was a long time ago. In a natural way, stimulated by youthful travels with my family, sometimes for months, around India. I saw men and women who worked, tools, places, processes, words, buildings made of mud, earth, silt, branches and marvelous handmade objects. Then the works of Le Corbusier, in 1972, the expressions of ancient Indian-Buddhist architecture. A wide range of situations. These were the passages that influenced me. Diversity allows you to hone your spatial perceptions. I didn’t think about it much, I just enrolled in architecture school.”

As a child did you dream of being an architect?
“No, actually I wanted to be a deep-sea diver.”

Were there other architects or divers in your family?
“No, they are all doctors. But from an early age I already knew that I did not want to be a doctor.”

Is there a contemporary architect you feel is close to your vision?
“I very much liked the Spanish architect Enric Miralles, who died young. He was brilliant. Very precise, hard to replicate. With a sixth sense, which I also find when I think about Gaudì or Louis Kahn. They were all looking for something that went beyond their comprehension: the incommensurable.
Art, in this sense, is even more bent on finding that. Just look at Leonardo or Michelangelo. They were artists and architects. Of course I am not comparing myself to them. But for me too there are no boundaries. I am interested in deconstructing the status of the disciplines, in moving towards linguistic exchange, exploring the idea of other possibilities.”

As a contemporary artist, with whom do you feel you have affinities?
Marcel Duchamp.

Things are not what they seem; they are something else, in Duchamp. What attracted you to his work?
“The loss of the concept of prejudice. I think about The Large Glass. It appears in a historical moment (1915-23) in which the pacifist movement allowed an external force to enter the work and influence it. It changed the course of things. The parameter of evaluation was no longer “I like it/I don’t like it” but instead other balances and connections. I also admire the works of Joseph Beuys, of land artists like Michael Heizer, Robert Smithson. But Duchamp was the most revolutionary. He challenged the idea of what art is, opening up a whole range of possibilities.”

With this freethinking vision, what would you like to design?
“A school for children, it doesn’t matter where. I have an idea of what it could be. Formed by classrooms where it is more important to look out the windows. Not to get distracted, but to observe how outside and inside reinforce each other. A sign in space that permits other generations or civilizations to meet it, recover it, disperse it. A way of thinking about time with greater detachment. Crossing it.”

On the plane of reality, what are you working on right now?
“The studio has architectural worksites in progress in India, France (a luxury hotel based on the transformation of an old 16th-century convent), Japan (a community space with a small spa at Onomichi), Spain, China and Switzerland. At the same time, I am continuing with my own personal artistic research.”

In the complex simplicity that guides your work on all scales, where does the quality of the project lie?
“In the practice, and in returning to it as a project approach. For me the theory is the practice.”