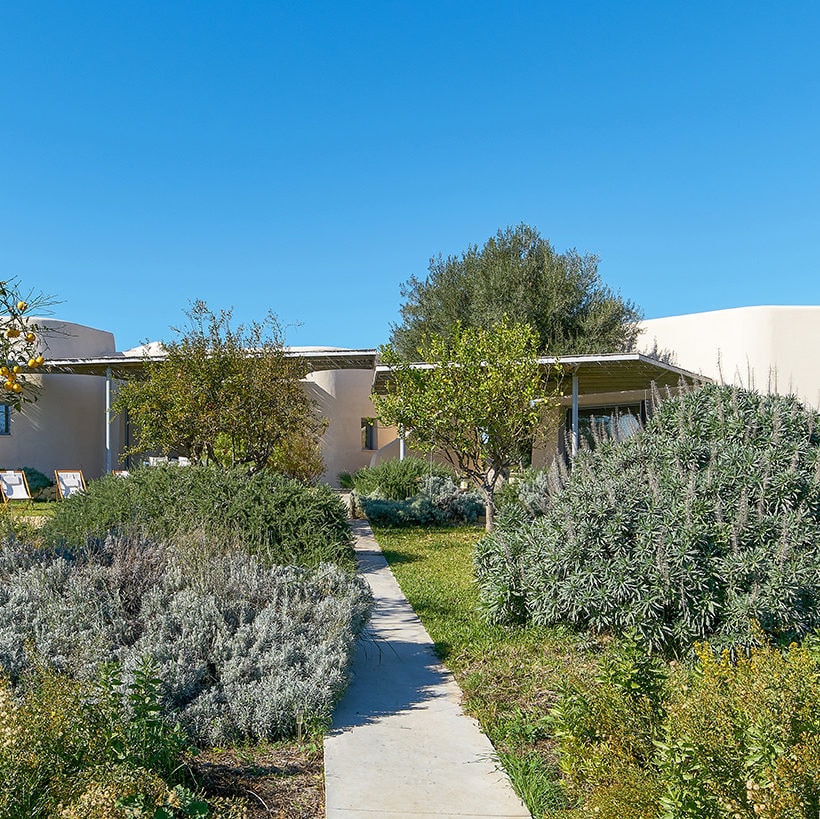 In the countryside near Noto, a vacation home interprets an idea of landscape
as a paradigm of reference for design

“The cultural panorama and the farsightedness of the client always make the difference in a project,” says Mario Cutuli, the architect behind this vacation home at Vendicari, in the countryside near Noto, for the entrepreneur Guglielmo Parasporo (Cities Reference) and his wife Elena Del Drago, art curator and critic.

Based in Rome, with a focus on urban planning and environmental/social sustainability (part of the staff of the mayor’s office from 2001 to 2007), Cutuli was able to count on elective affinities with his private clients, thanks to years of acquaintance, helping them to share visions of an appealing habitat.

“A case of mutual trust, without filters,” he explains, “which led us to make the architectural artifact emerge from its place of reference, with organic, archaic, rather ancestral forms. The Tonnara of Vendicari is about two kilometers away, as the crow flies, while the plateau of Monti Iblei forms the backdrop, and we are inside a park of almost two and a half hectares where about 250 trees have been planted, alongside the native shrubbery.

The architecture is the result of analysis of the landscape context. I thought about the seaside towns and rural life of these places, the age-old definition of the boundaries between nature and artifice. The house has been conceived as an inhabitable sculpture. A presence that lives in the landscape and draws force from it, erasing the boundaries between the space that encloses the objects inside its walls and the elements that characterize the exterior.”

The villa is the apparently random – but actually very precisely gauged – sum of three volumes spread on the ground, with irregular geometric forms, rounded at the corners, with slightly inclined walls, as if tapered and polished by the wind, blending into the greenery of the park where the swimming pool, the solarium, the barbecue, the tree house and other whimsical inventions have been built.

A single level, drymasonry walls in local stone to form small terraces, adapting to the sloping topography, with two external staircases leading to the roof terraces. At the back, to the west, the house displays the solid impact of a fortress with small windows framing elements of nature as if they were paintings.

The main facade to the southeast, by contrast, has an extroverted character, with a sequence of indoor and outdoor spaces, large openings with sliding shutters, framing views of the sea and the Tonnara of Vendicari, gravitating around a large pergola made with canes, the heart of the residence and its most important space for socializing.

In short, the overall layout suggest the expressionist image of a large embedded doll set, with hints of regional influences, spontaneous historical memories of Arabian and Norman origin. The volume at the center of the composition contains the living, dining and kitchen areas in an uninterrupted continuum. To the left, this volume is connected by means of a buffer space to the part containing the bedroom zone (three rooms plus two bathrooms), a more traditional block that faces the garden behind it.

On the right, contiguous but independent, the guesthouse has a living room with a kitchen corner, a bedroom and a bathroom, organized with sliding panels to make the indoor and outdoor passages toward the pergola, aligned with that of the main volume, more flexible and fluid.

For the materials, Cutuli has opted for pale, luminous stucco, finished with limewash and powdered local stone on the outside, in harmony with the uniform flooring in industrial cement or resin.

“The thickness of the walls guarantees a good natural micro-climate inside,” the architect explains, “where the wind is intercepted by the design of the windows, triggering aeration of the spaces, while the pergola and the vegetation protect the house from the hot summer sunlight. Rainwater is recovered for irrigation, and the use of solar panels completes the concept of a responsible work of architecture.”

The interior design reflects this model, conveying the idea of country living free of any image requirements, offering the leading role to the human body and its movements inside the white, neutral space.

The furnishings, with their fluid, sinuous lines, are built into the walls and floors of the enveloping spatial container: from the masonry bench with a top in wood that opens to contain objects in the living area, to the shelves and the kitchen block, which replicates the form of the skylight above it. The latter acts as a chimney and a sundial over the burners, symbolically marking the time of meals. The precise insertion of a few selected found and vintage objects (from the chairs to the custom white table on wheels) alongside iconic pieces arriving from other homes (like the Panton Chairs and the Parentesi lamp by Achille Castiglioni and Pio Manzù) underscores the poetic design intention in relation to the landscape that has guided every choice.

The outdoor space below the large pergola made with canes is the heart of the residence.
The organic and expansive form of the architecture in the landscape context, on the western side.
The entrance zone, with an olive tree in the background, a narrow passage where the opening between the two contiguous but separate blocks forms a perspective axis.
Plan
Section
The unified and open space that combines living, dining and kitchen zones. Parentesi floor lamp by Achille Castiglioni and Pio Manzù for Flos (1971) and – around the long wooden table – white Panton Chairs from Vitra. The armchairs are vintage, while the white table is by Mario Cutuli, like the bench and the kitchen island in masonry, which seem to emerge from the cement resin flooring. Refrigerator by Smeg. In the drawings: plan and section of the house.
The single volume at the center of the composition is open to the southeast thanks to a large window facing the sea and the Vendicari nature reserve. The skylight functions as a chimney over the burners of the kitchen island. In the background, three steps lead from the more social spaces towards the bedroom zone.
The solarium on the roof terrace, reached by means of an external staircase. Adapting to the slope of the hill, the outdoor zone is divided into three parts that extend the atmosphere of the interiors into the open air.
The fulcrum of interaction in the house is the outdoor zone paved in industrial cement, sheltered by a pergola that joins the main volume to the contiguous but independent space of the guesthouse, towards the northeast.
#Achille Castiglioni