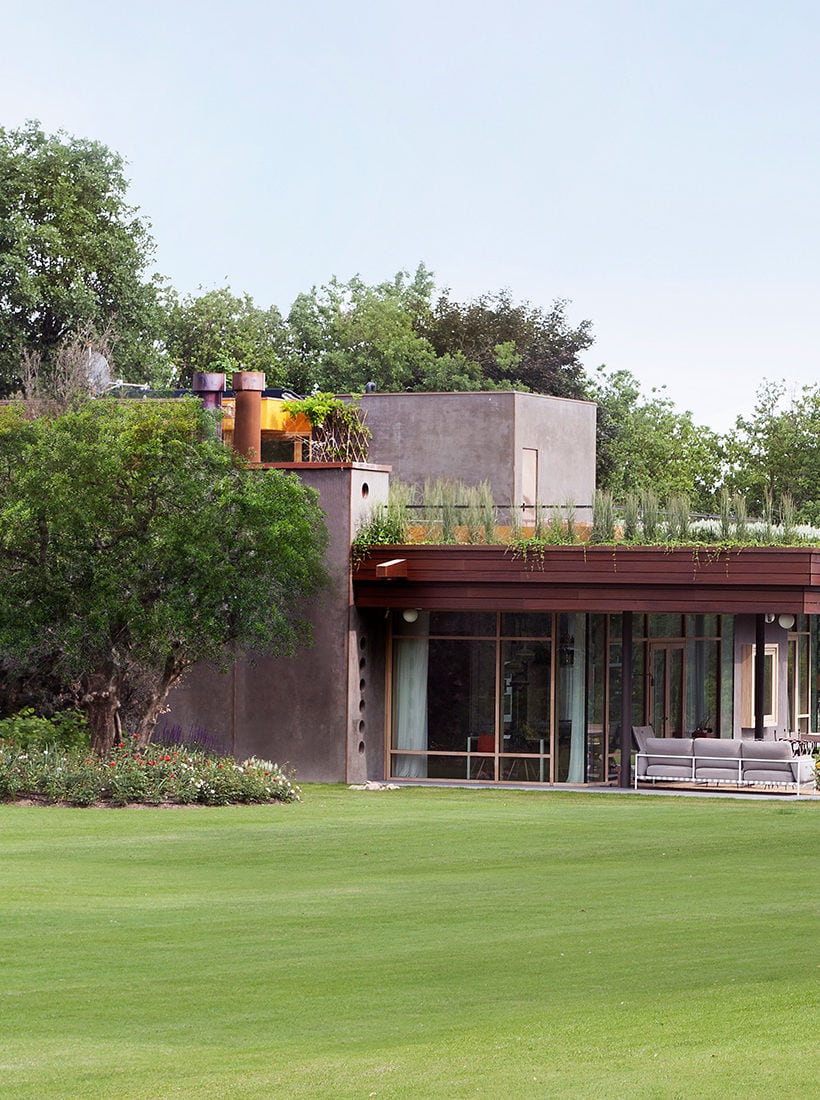 Architecture and entrepreneurial challenges. These are the two passions of Valentina Moretti, who at the age of 35 has already received many international prizes and honors. The latest came straight from the hands of the President of the Republic Sergio Mattarella for the brand Moretti MORE, a collection of custom-designed homes she has literally invented together with a team of architects.

The goal: to promote a new concept of living based on the idea of pret-à-porter architecture, where innovation, control of timing and costs and a focus on environmental sustainability become fundamental factors. Moretti MORE was founded in 2010, inside Moretti – Building on Human Values, a company with over 50 years of history and experience in the construction of large works.

Behind Moretti MORE there was a long process of research, lots of passion and continuous experimentation, as can be seen in Valentina’s new home (“I couldn’t wait to have a complete experience of a Moretti MORE home,” she told us).

Created together with her husband Francesco Matricardi – with whom she found the interior design studio AMOAMA Architettura in 2014 – the villa is located on a wooded hillside amidst the vineyards of Franciacorta. Here’s our interview with the owner-designers.

Private and professional concerns meet in this house: was it hard to reconcile the different needs?
Valentina Moretti: The initial decision wasn’t easy: first of all, I had to convince my husband, who wanted to live in the city, even in a rented house so as not to become too attached to one place, to avoid firm ties.
Here, in the land of my family (the house is on a hill that also hosts the 5-star resort L’Albereta di Erbusco), I wanted my kids (twins, aged 2) to grow up in a green setting, as I did, with my sisters… As for the professional sphere, for some time I had wanted to directly experience what it means to acquire a Moretti MORE home, to understand to what extent it could be personalized, to adapt the spaces to individual and family needs.
The real challenge, however, was to test the advantages of the industrialized system regarding construction processes and modes, considering the complexity of the project in static terms, and the tight schedule we had set for ourselves.
The worksite began on 4 July 2016 (I remember the date because when I was working in New York in the studio of Richard Meier, Independence Day featured a great BBQ) and the work was done on 12 December: the next day we wanted to move in, to celebrate the night of Santa Lucia with the kids, as is traditional in my city (Brescia).
A decisive role was played in this adventure by our interior design studio AMOAMA Architettura, which we run together with the architect Federico Soregaroli (who coordinated all the interior design). We were also helped by Chiara Brenna, my classmate at the Architecture Academy in Mendrisio, who has also been by my side in the first years of the MORE adventure…

So this is a success story, in spite of the initial hesitations…
Francesco Matricardi. Certainly! I admit that I was very skeptical at first. I had different ideas, less settled, but I got into the mood very quickly, because I understood that this was an extraordinary opportunity in professional and corporate terms… We could make our own home into a kind of showcase, an iconic project that would concretely demonstrate how much it is possible to ‘raise the bar’ of constructive feasibility of our system.

To achieve what results?
To create a perfect project from all viewpoints and thus to overthrow the negative connotations that still see prefabrication as a system for project of low quality, instead of understanding that this is an innovative approach.
A system like Moretti MORE, precisely because it comes from an industrialized process, permits precise control of construction details, timing and costs, while guaranteeing extraordinary quality that could previously only be achieved with traditional construction systems…

So the idea was to counter the cliché of cheap&kitsch prefab homes?
VM. Exactly. Our project demonstrates that you can use an industrial system to develop a residential concept based on beauty and architectural quality, in an absolutely tailor-made approach: the patented Moretti MORE system uses modular elements in concrete and wood that have a dual function as structure and finish, offering maximum freedom of layout and extreme speed of implementation.
The modular parts from the production plant arrive at the worksite ‘ready for use,’ which cuts down on workmanship at the site, ensuring the highest standards. In particular, for our house we developed a ‘mixed system’ that calls for a structure in iron beams onto which to attach the concrete infill.
The large wooden roof made it possible to design big overhangs, standing up to the load of the earth used to make the roof garden.

In other words, you have put the MORE system to the test…
F M. Yes. And once again it has proven its versatility, adapting to the needs of some very demanding ‘clients’…