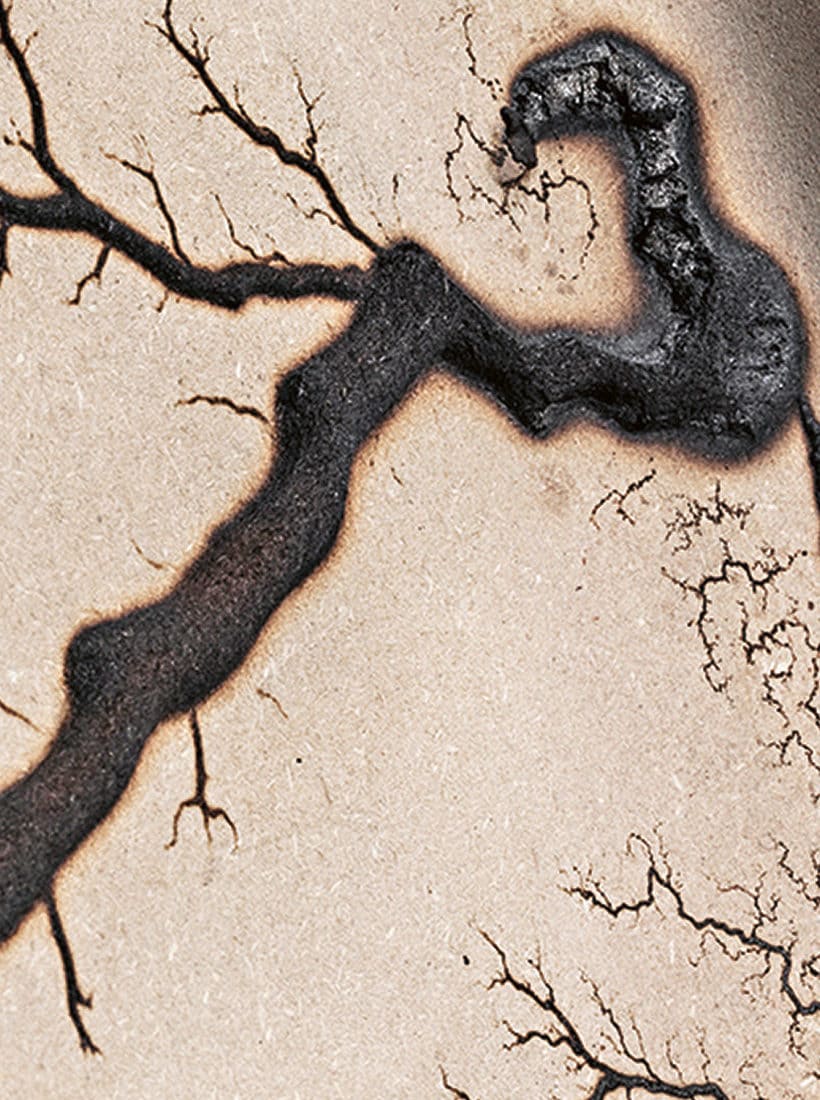 What happens when designers with an industrial background get involved in crafts design? The answer lies in the latest works by Carlo Contin, Giacomo Moor, Vittorio Venezia and Carolina Martinelli, selected by Domitilla Dardi for the Object section of Miart 2017, the modern art fair held in Milan from 31 March to 2 April.

“What these designers’ projects have in common,” the curator says, “is the way they enter crafts workshops: not as a designer who turns to a maker, nor in order to pick up on traditional know-how. The core of their designer/artisan relationship is reflection on repetition, and on the potential personalization of pieces.”

The project by Carlo Contin comes from trespassing into a new area, for him, namely that of decoration. The Fractus collection presented at Galleria Subalterno1 is a collection of furnishing complements – vases, trays, bowls, all in MDF – that reprise the types of items found in bourgeois homes, but injected with an electrical charge of 7000 watts.

“The project,” the designer explains, “happened by chance in the workshop of my friend Sergio Rebosio, who does experiments with high tension, where I discovered the capacity of electric current to create fractal designs that seem to be reproduced from nature. Nature and decoration are the main themes here, and I have united the two.”

Contin gets his process, then, from experiments normally confined to the labs of enthusiasts, almost ‘nerds,’ applied to full volumes for the first time, working on parallel lines: the decorative effect is obtained in keeping with the logic of the growth of a branch, making the electricity follow the damper parts of the panel “just as a branch follows the sunlight.”

The particular feature of this decoration is its oriental look, when seen from a distance, while up close you can notice particulars that help you to understand its random origin triggered by the current. There is something romantic,” Contin concludes, “about seeing positive and negative electrodes make their way and give rise to a real spark when they meet!”

“Precious defects” was the title of the thesis with which Giacomo Moor took a degree a few years ago at the Milan Polytechnic. Since then he has never stopped working on the same material, and his woodworking shop has become a small center of new production near Via Padova, where he team makes custom furniture while experimenting with wood, its qualities and its limits.

With this background of research and dialogue with the material, this year Moor has created Vapore, a collection of furniture for the gallery of Luisa delle Piane. The technique investigated is that of steam curvature of solid wood, typical of the Wiener Werkstätte, though it is an ancient process, in this case taken to extremes, permitting a small curvature radius: 60 mm.

An industrial process is applied, but to further exploit the production molds – since this is a limited edition – the curve sizes are optimized. What might seem like a typical ‘defect’ of solid wood, the tendency to return to its original form, is resolved by means of an obligatory passage in panes of glass and wooden volumes, which becomes an expedient to keep the whole system under tension and in balance.

The result is a very technical, essential aesthetic, far from the decorativism typical of the traditional use of this technique. Wood and glass, nature and industrial artifice coexist in a solution interrupted and emphasized only by the manual application of shaded silver on the glass, which accentuates the ‘U’ effect of the wooden structure and explicitly suggests the steam of the process.

The limit and self-determined thrust of the material are tamed by the know-how of manufacturing culture and the focus on a formal taste, which in this case gives rise to a landscape of furnishings that is even more refined, if possible, that the results achieved thus far in the memory of the tradition. All in the context of Italian design.

Finally, the project by the studio Martinelli Venezia for Colleoni Arte, the Bergamo-based gallery that opened in 2006 with versatile work on artistic creations and limited design editions, produced directly in the woodworking and tailoring shops connected with the gallery, which also act as suppliers for local businesses (from upholstery to drapes, wallcoverings to carpets).

For this gallery, Vittorio Venezia and Carolina Martinelli have created the Penelope project, a circular carpet whose three-dimensional consistency comes from close longitudinal stitching in two directions, done with photoluminescent thread. “In the daytime the effect is white on white, while in the dark a decorative weave appears, arranged on the two sides, which vanishes with the light, in a reference to Homer’s tale of Penelope and her shroud.”

In this case the thread, in polyester laden with mineral-base pigments, often used by automatic embroidery machines, has been taken into a workshop in keeping with an approach of contamination between crafts and industrial processes.

Domitilla Dardi concludes: “Contin, Moor, Venezia and Martinelli show us how the contemporary design universe can establish a dialogue with crafts. These designers are guided by materials and processes: the result is that repetition is not standardization, the series can become a container of variations, the gesture a discipline of form. We often forget, in fact, that crafts were serial products, in the past, and that the work on a single, unique piece represented an exception to the rule.”