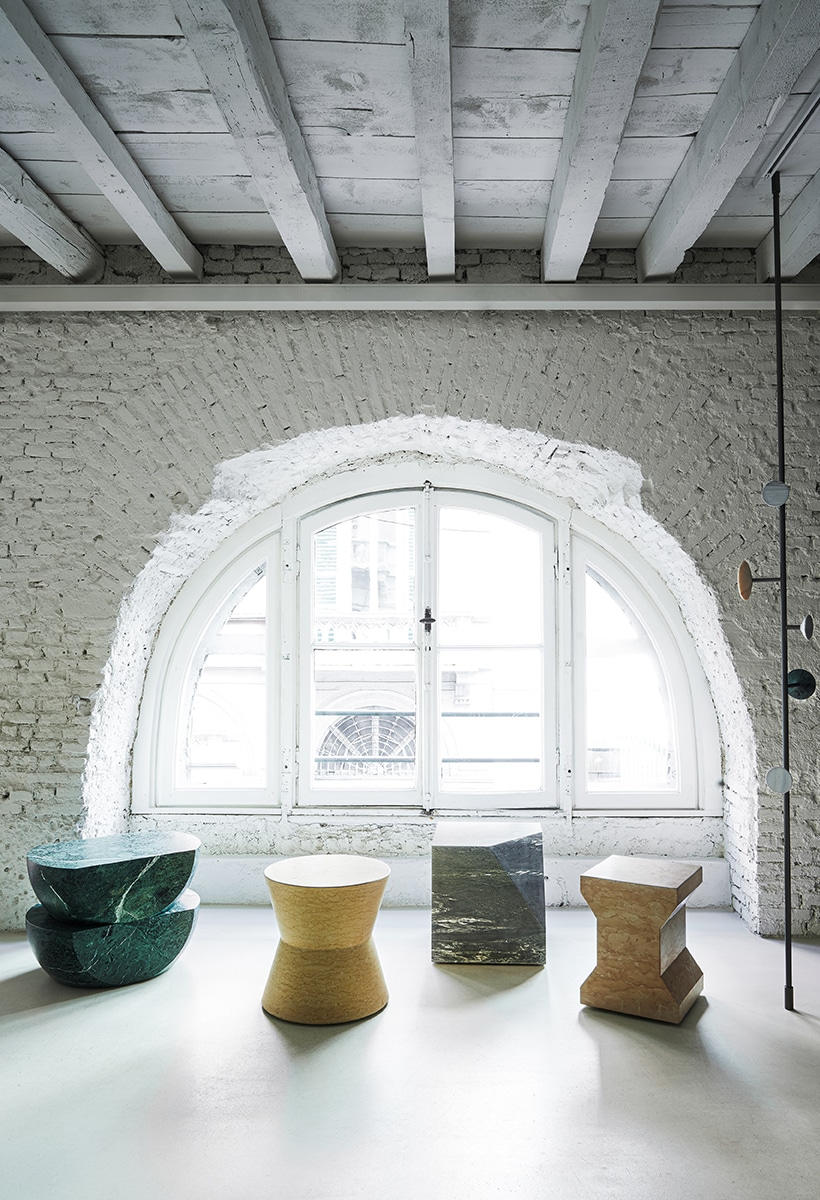 From architecture claddings to design objects. Some designers have ventured into creation of stone furnishings that show the material potential in series production

Not only cladding slabs or tops for kitchens and tables, the stone furnishings are now showing new types of catalog products and material applications that open up to market opportunities for the stone industry. Advanced technologies such as numerically controlled machines are at the service of designers' visions, which reinterpret the stone in terms of seriality and less waste of matter. What are the reasons that push the sector to focus on stone furnishings?

“
The crisis in the construction sector and the competition have led some companies to diversify by introducing furniture to catalog, furnishing accessories and cladding surfaces, also thanks to the laboratory technological upgrading, able to address the productions towards seriality and precision, with advancing experimentation in stone design and the involvement of designers and architects. (Raffaello Galiotto)"

"Historically the core business of our companies has not been the production of furniture but of floor and wall coverings for architecture," says Raffaello Galiotto, a designer who is attentive to new technologies in the stone field and much influenced by his roots, he’s in fact a son of Chiampo’s marble district (Vicenza, Italy) and has developed multiple projects aimed at new languages and production processes. “In the eighties and nineties, there was a thriving foreign market of stone objects and tables which then faded. The recent crisis in the construction sector and the growing competition have led some companies to diversify by introducing furniture to catalog, furnishing accessories and cladding surfaces, also thanks to the laboratory technological upgrading, able to address the productions towards seriality and precision, with advancing experimentation in stone design and the involvement of designers and architects. But while important for pushing this new business outside the construction sector and for the process qualitative growth, these experiments have difficulty in entering the commercial logic of the supply chain with a consequent price increase. This is due to the basic cost of the material and the workmanship that is still more focused on uniqueness than seriality and on the artisan footprint. So it is important that stone processing companies evolve towards industrial production”. 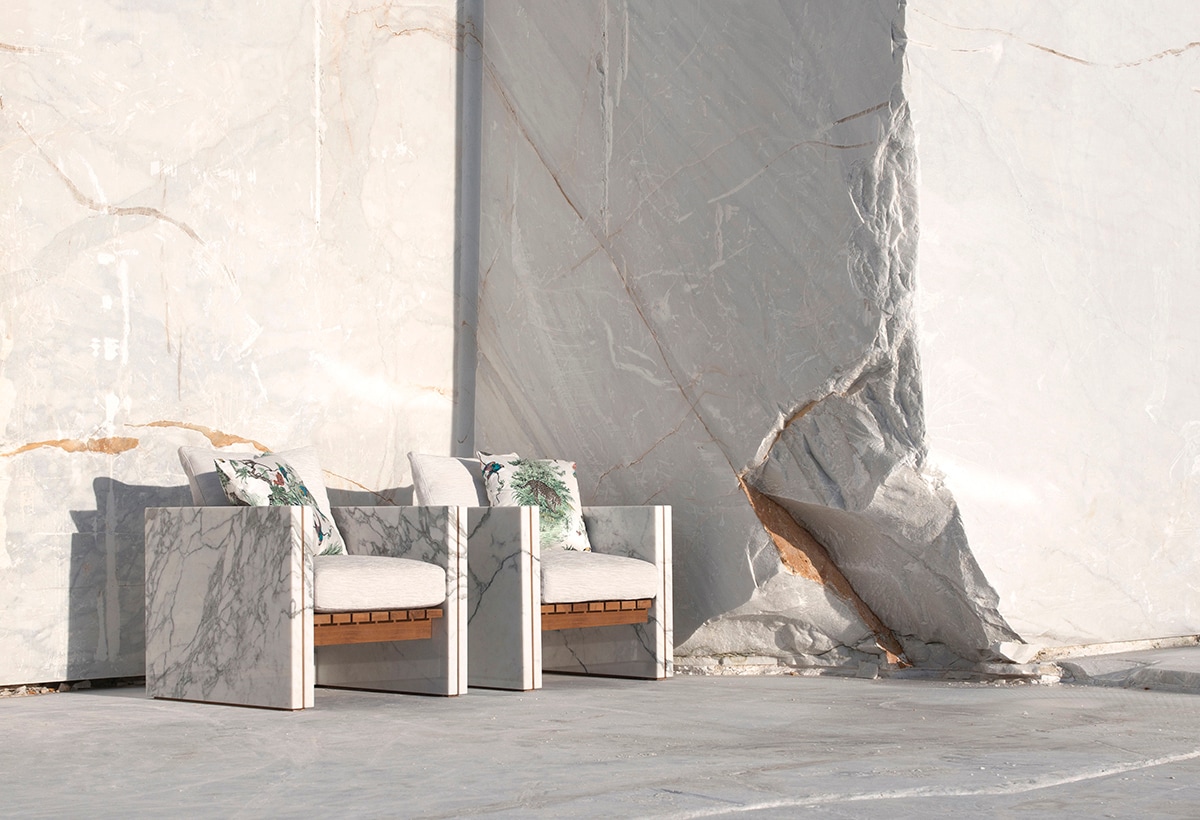 6
Eugenio Biselli has designed for Franchi Umberto Marmi the Bettogli seating collection that uses natural materials such as Bettogli marble combined with wood and upholstered furniture. "It is important to use natural and recyclable elements, canceling the environmental impact and enhancing human work", the designer comments.

The entrance of furnishing complements has certainly changed the company’s research in the sector. "The study of detail in the small scale requires increasingly high-performance results in thickness, lightness of the material and reduction in processing waste", explain Laura Fiaschi and Gabriele Pardi of Gumdesign, manager architects of La Casa di Pietra, a sort of widespread factory that boasts 66 collections for over 250 objects made by 41 artisans and companies from almost all regions of Italy. "The small three-dimensional product pushes processing into unexplored territories and allows stone companies to transfer the know-how acquired in the world of architecture into design. Marble and stone are an important value for our territory and require project sensitivity and humility, attention to waste and a design that is not so "decorative" as it is experimental, to obtain apparently simple but extremely articulated results. The designer is in fact required to know the machines, the processing techniques, the tools available and the response to mechanical stresses due to processing".

“
Companies often have a knowledge that comes from many years of experience and must be transmitted and handed down. At the same time, the designer's needs push companies to explore new technologies in order to achieve the required results and to keep up with market demands. (Elisa Ossino) "

Dealing with stone design means to know very well the material and its territory, in a consolidated sector that is facing change. Eugenio Biselli, a designer from Carrara, has created a collection of sofas for Franchi Umberto Marmi that enhances, in juxtaposition with wood and upholstery, the qualities of Bettogli’s precious white marble, whose quarry is under concession to the company. "I grew up in a small town where the economy has always been based on the extraction and processing of marble. Looking at the Apuan Alps means breathing one's origins and the struggle of our fathers. For a designer, to use these materials means to communicate to others our most remote habits. These furnishing objects may seem risky but actually reflect our identity." 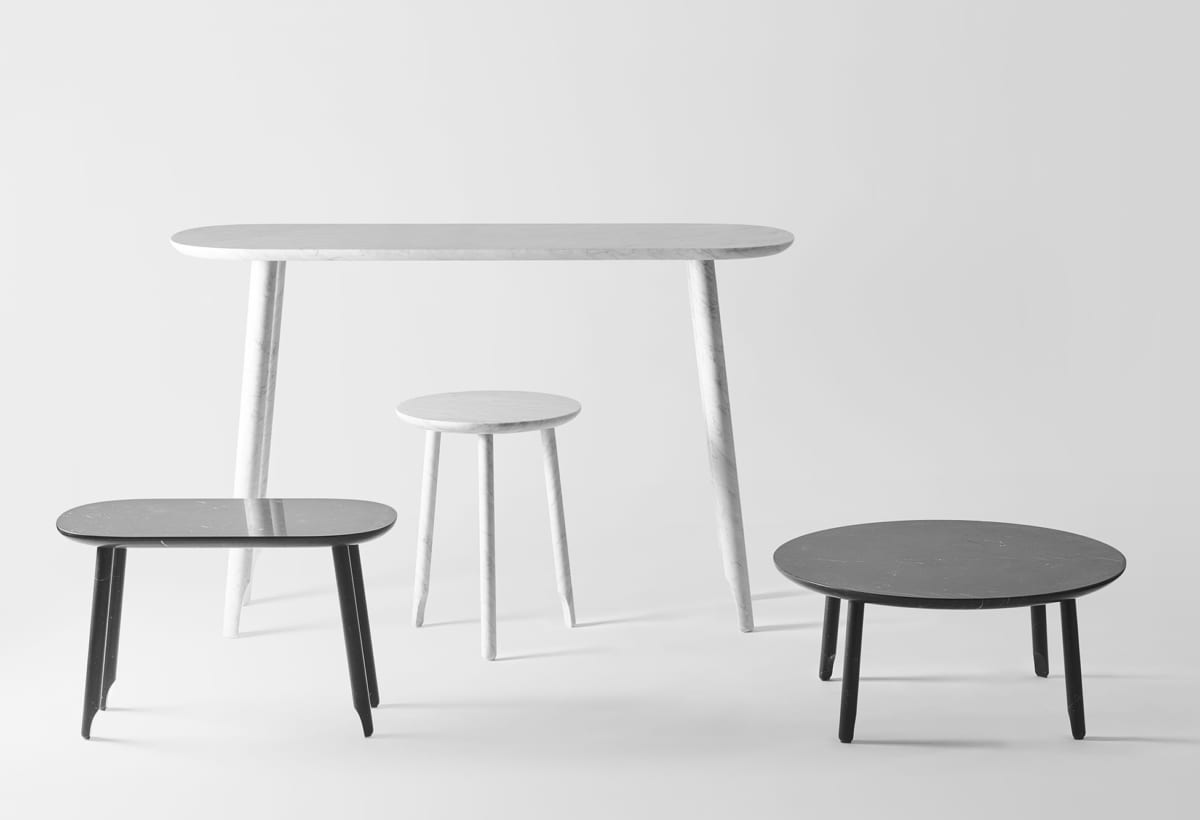 7
Nendo has designed the Ballerina Collection of tables and consoles for Marsotto Edizioni, produced in white Carrara marble and black Marquina marble, in glossy or matt finishes. Its concept is to give a feeling of lightness through the legs, whose points are thinned and finished in an arc, recalling a ballet dancer on tiptoes.

"The designer must approach this unique heritage with great humility – the Gumdesign team concludes –they must try to go beyond the known margins in search of new types of products and to construct production chains that cross paths and generate development strategies and ideas.

"The stone sector so becomes a link between different worlds, helping to get rid of preconceptions. Odoardo Fioravanti, an industrial designer with a strong sensitivity towards materials and production techniques, has created a table using Grassi Pietre that juxtaposes a top in perforated metal and Vicenza massive stone bases. “I believe that design still has a lot to do in the world of stone, but I trust in the future because research is increasingly leading to natural and less polluting materials. And designing objects to catalog is a challenge because of the complexities of its processing, such as the great weight associated with fragility, or the need to waste as little material as possible”. The comparison between designers and companies therefore becomes crucial to shift the limit of achievements.

“
I believe that design still has a lot to do in the world of stone, but I trust in the future because research is increasingly leading to natural and less polluting materials. (Odoardo Fioravanti)"

"From this meeting surely the most interesting projects are born", says Elisa Ossino who has been designing collections of stone furnishings for Salvatori Company in Versilia. "Companies often have a knowledge that comes from many years of experience and must be transmitted and handed down. At the same time, the designer's needs push companies to explore new technologies in order to achieve the required results and to keep up with market demands. I find it extremely interesting that the stone serial objects are somehow always unique pieces. In fact, stone is a living material that should be loved precisely because of its uniqueness”. 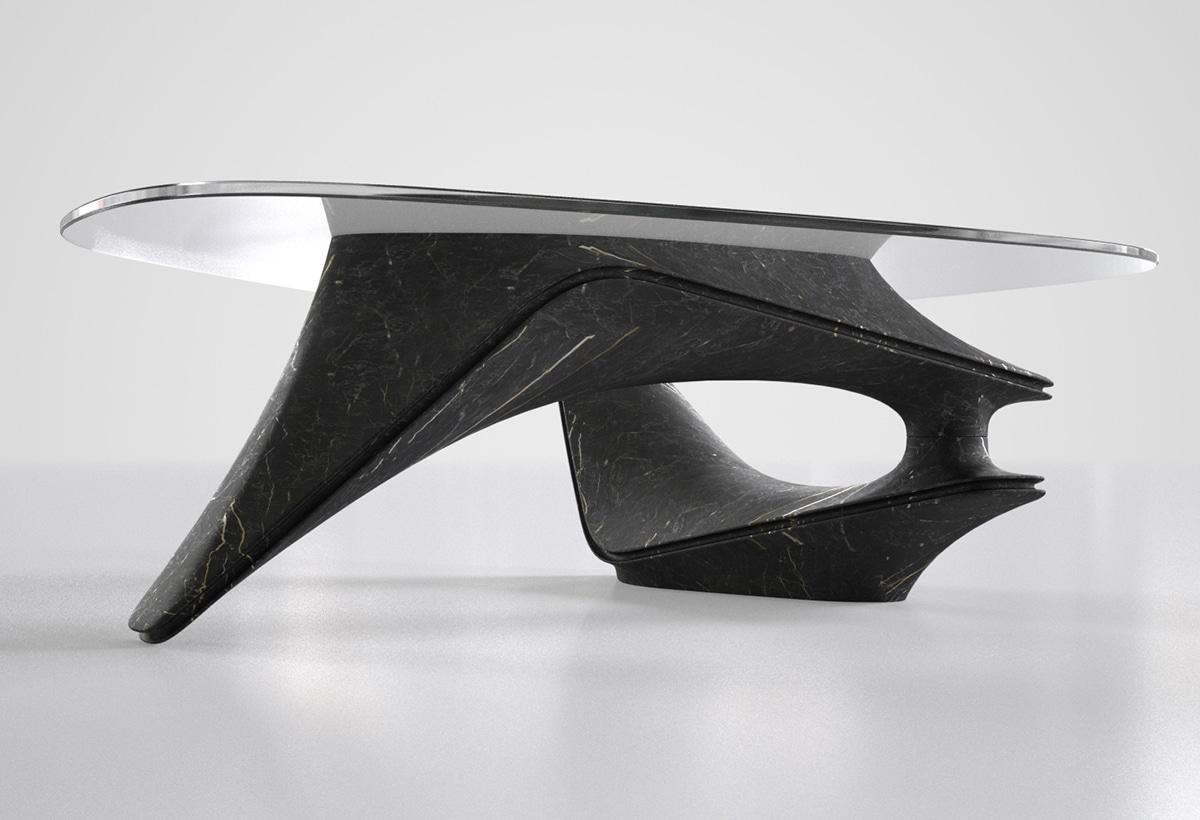 6
With Isa Table, created by Citco, Ora Ito pays tribute to a famous designed table by Isamu Noguchi in 1947. Dynamic and bold lines give the piece a sculptural form. The basement it is in digitally molded marble, the top is in glass.

That is precisely its secret: "Stone can give uniqueness to every single serial product –comments Galiotto – It is up to the designer to enhance it, by wisely using its non-uniformity, to be considered not as a defect but as a successful feature. Still design brands do not sufficiently exploit the potential of digital processing tools and today's ability of marble companies to make use of them”. Speaking of experimentations, let’s mention the recent Marmor Natvm Project for Budri brand by Gwenael Nicolas, founder of Curiosity Studio in Tokyo. He says: "I thought of the marquetry technique not from a decorative point of view but as a recreation of the potential of nature, I was in fact looking for a stone that degraded from black to white. The beauty of this art work is manifested by the means of technology that eventually disappear and make the artificial natural. Marquetry is a technique that also allows to selectively reusing waste material, creating patterns and obtaining new results in the mixture of stuff - as in the case of the mirror revealed by the stone. It is important for a designer to bring about a change in the perception of the material, making it appear lighter or even softer. "