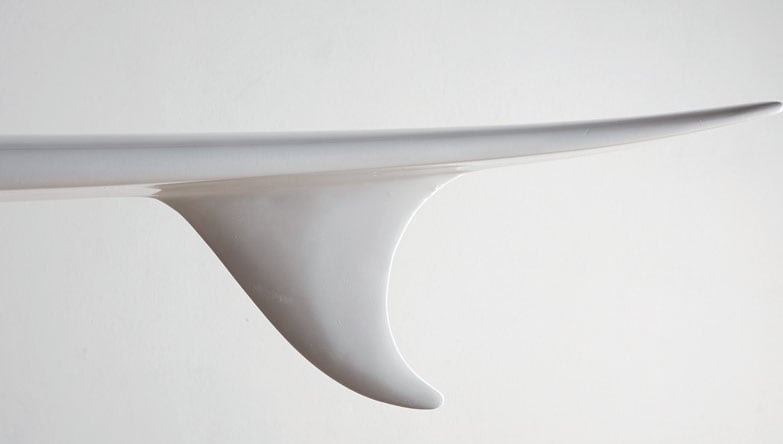 On the wave of design

On the wave of design

Design is always looking for new challenges that make it possible to take an ‘other’ look at the objects of our everyday life.

So it should come as no surprise that two designers have decided to try their hand at creating a surfboard. What is interesting about the stories of Giulio Iacchetti and Luca Bressan is that they get started in worlds very distant from the sea and the waves, and it is precisely this distance that lets them develop an alternative vision with respect to the established, conservative tenets of surf culture. The result is innovation, not just in terms of form, but also in terms of process. The tale of Giulio Iacchetti is first of all one of friendship, of brainy conversations with Francesco-Franz Fiorentino, owner of a venue in Milan that is a reference point for surfing buffs, the second most popular in Europe after the club of Biarritz. “I began to hang out at the Surfer’s Den,” Giulio says, “because at the time it was close to the studio I was splitting with Matteo Ragni, and because I liked the atmosphere. Franz introduced me to the world of surfing, which is made of music, colors, drawings, comics, cinema, clothing, and of course surfboards, objects that have always fascinated me. I don’t like the water, I don’t know how to swim, but the idea of rethinking and designing a board, without stylistic pitfalls, had intrigued me for some time. It wasn’t easy to get past the surf stereotypes, though. The more they told me that certain materials, forms and measurements were obligatory, the more I wanted to break the rules. In the end I convinced Fiorentino – who is a great inspiration for me – to join me in a project that tries to make a purely artisanal process more contemporary and also more economical.” The idea was to industrialize the first phase of the making of a board, where a block of polyurethane is shaped by hand. Giulio introduced a numerically controlled milling machine that sculpts the material according to forms dictated by a 3D file. In this case, they are the forms of three marine creatures: the dolphin, the shark and the killer whale, evoked not only by the silhouette of the board and the fins, but also by the colors that cover a single range of gray, white and black, avoiding the bright hues of the ‘tiki’ aesthetic. The process turns manual in the phase of polishing and application of the fiberglass: this is where the ‘shapers’ come into play, who apply elbow grease to give the board an ideal finish, making it strong and giving it good performance. “I have always thought,” Iacchetti concludes, “that it is right to let machines do work that can be more economical and more precise when it is done by mechanical means. Human hands should come in where they are really needed, where they truly bring added value. In this sense, I believe in hybrid processes.” The story of Luca Bressan is different, starting on the peaks of the Dolomites and reaching the ocean waves of Fuerteventura. Luca lives in Valdobbiadene, where he works on industrial products, monitoring the production in every phase, from concept to calculations for molds. He spends his free time in the mountains, cultivating a passion for snowboarding in the winter. But then one day he discovered surfing: it was love at first sight, and he visited famous beaches all over the world. He says surfing is “a philosophy of life more than a sport, capable of developing latent, primitive energies.” His innate love of making things by hand, which had prompted him to construct bicycles, motorcycles, robots and snowboards for himself and his friends, now led him to imagine a surfboard of his own, technological, with high performance, but also natural and ecological. “I have problems with asthma,” Bressan explains, “and I cannot come into contact with toxic dust. A bit due to this limitation, a bit for the love of wood that comes from my cultural background, I gradually moved towards the idea of a surfboard made of Paulownia wood, which is very light, strong and stable, with good properties of hygroscopic insulation. It comes from a very common plant – I discovered that I have one in my garden in Valdobbiadene – that grows very fast; so it is an ecosustainable wood. I have combined an innovative technological process with this material, developed in three years of research, that lets me make a board that is hollow on the inside: I start with the design of the board, after which I concentrate on the single components, derived from its sectioning along many longitudinal planes. The production in wood by milling happens piece by piece; then all the parts are glued together, for polishing by hand to add character and personality. The last finishing is done with a series of coats of linseed oil, which oxidizes and polymerizes to create a natural protective layer that makes the wood waterproof. The result of this process is a board that is entirely in wood (even the fins), and particular light: it weighs just 3 kilos, the equivalent of a traditional fiberglass surfboard.” Today Luca Bressan splits his time between Valdobbiadene and Fuerteventura, the surfer’s paradise where he has put down roots to pursue his passion and to develop his project. The wooden surfboard has been an immediate hit, with orders arriving from all over the world, and now his goal is to develop a kit for assembly, to reduce shipping costs. In the meantime, his story has become a documentary short directed by Marco Mucig, tracking him from the mountains of the Veneto to the sea of the Canary Islands, narrating a challenge that springs from values of freedom and simplicity, and translates into design and business.