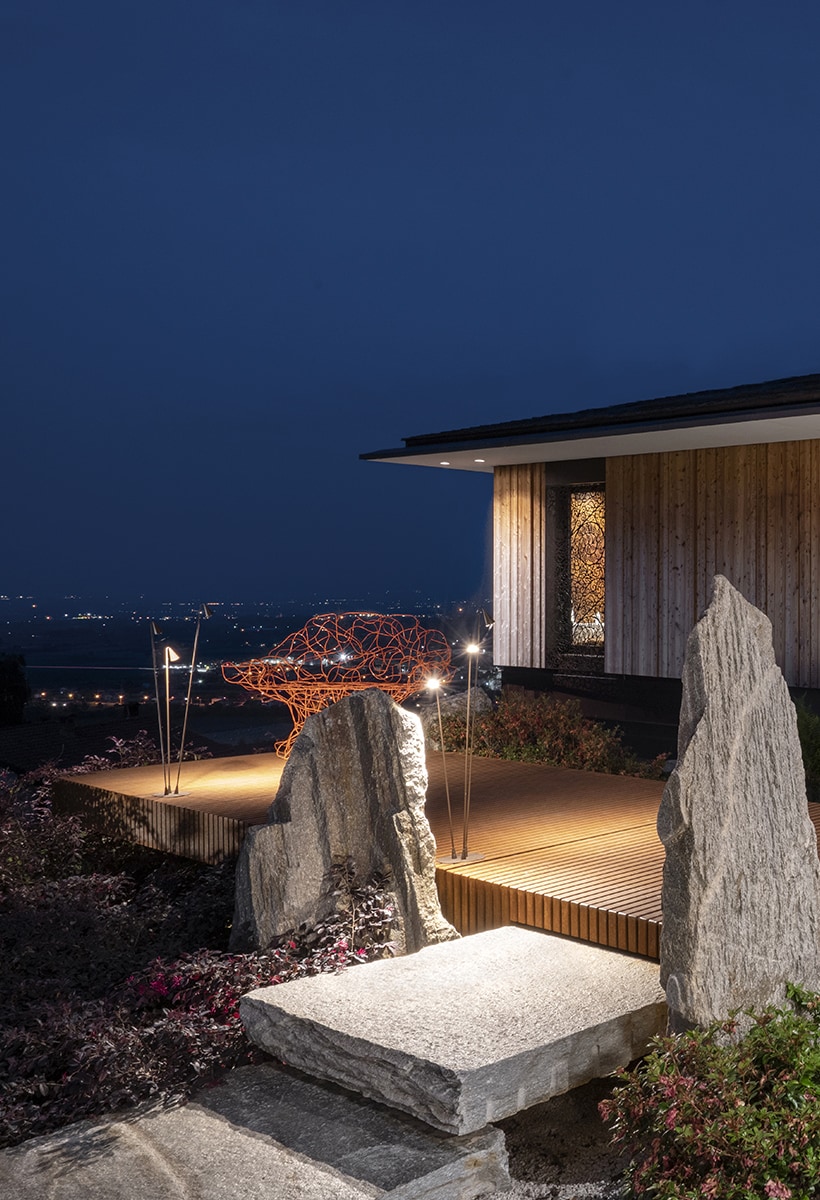 On the hills around Cuneo, in Piedmont, a villa in the midst of greenery with large windows overlooking the landscape becomes the protagonist of a disrupting narrative, with a wink at Japan and the craftsmanship of objects Made in Italy

We are looking at threads and patterns that intertwine, between nature, the objects of Italian design with an artistic-crafts matrix, and architecture: his great passions? “Yes, in a certain sense. To find a resemblance, I’d say this house is like a comfortable garment, in hemp, with a Japanese tone of elusive lines that get you back in tune with a more intimate dimension, with the rediscovery of handmade details.” Duilio Damilano, an architect based in Cuneo, decided to live on the edge of a forest about 15 years ago. This recent project is on a hillside, a parcel of about 20,000 square meters in the same zone: a villa in metal and wood, with a single level above ground and 500 square meters of habitat space, overlooking the plains below and the Piedmont Alps above. The landscape seeks dialogue, a relationship of empathy that is far from banal. 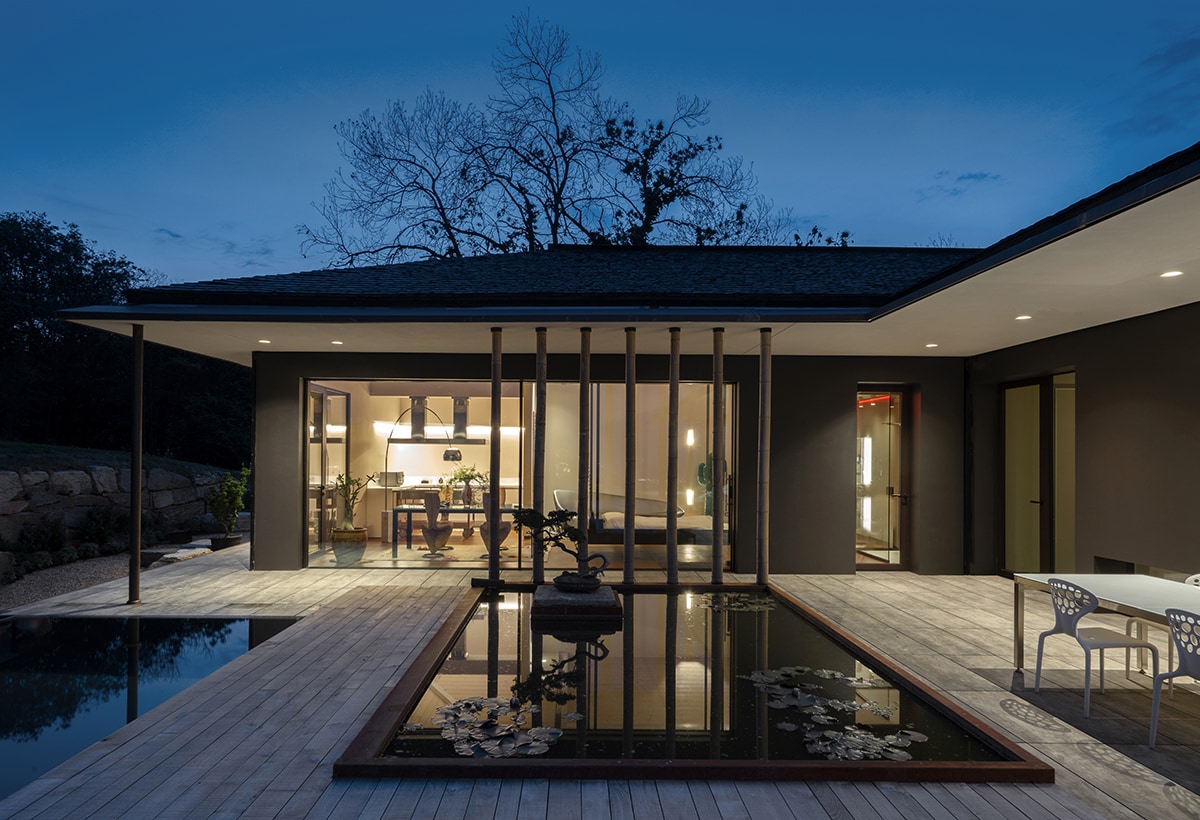 5
View of the villa.

“I like to narrate dwelling in a different way each time, in pursuit of an emotional impact that optimizes the functional program, between rigor and wonder,” he continues. “In this specific case I’ve been lucky. Made over the footprint of an anonymous demolished building, for a client who likes bonsai and has commissioned other works in the past, this contemporary design embraces a Taoist philosophy in its approach, a matter of attunement. We have both assumed the role of ‘spectators’ of the eternal becoming of nature and its boundless transformations of forms and colors across the seasons and the years.”

The rationalist structure of the villa, incorporating a main volume and an annex for guests in a single work, is influenced precisely by the desire to make large openings for the spaces, for maximum exposure to sunlight and the hill, then closing the building in a more introverted dimension in the zones near the neighboring houses. The creation of about one linear kilometer of terraces has permitted harmonious coplanar design of the surfaces, which can be used inside and outside, while the basement is set aside for the cars. The entrance on the northern side is reached by means of steps in rugged gray stone, immersed in greenery, which together with an overhanging walkway in Cor-ten creates a game of dynamic layout of the narrative episodes. On the platform, the chair-nest in steel wire by the Campana Brothers for Edra becomes the iconic feature chosen for the contemplation of the nearby and faraway landscape.

“
The sunscreens placed on the windows to the north, for example, have decoration that seems almost like lace, inspired by a suspended ceiling that impressed me in a subway station at Fukuoka, due to the sensation of great calm it spread."

Local rocks of different sizes, Japanese maple trees and large lawns following the natural slope of the terrain set up the encounter with the infinity pool, and two other evocative features – a lily pond and a Japanese garden – that add rhythm and character to the longitudinal extension of the main volume and its grafting into two staggered perpendicular segments. “I must admit that in the overall design of the place I have been influenced by certain images lodged in memory, the legacy of long voyages in the Orient, to discover traditional Japanese architecture,” Duilio Damilano says. 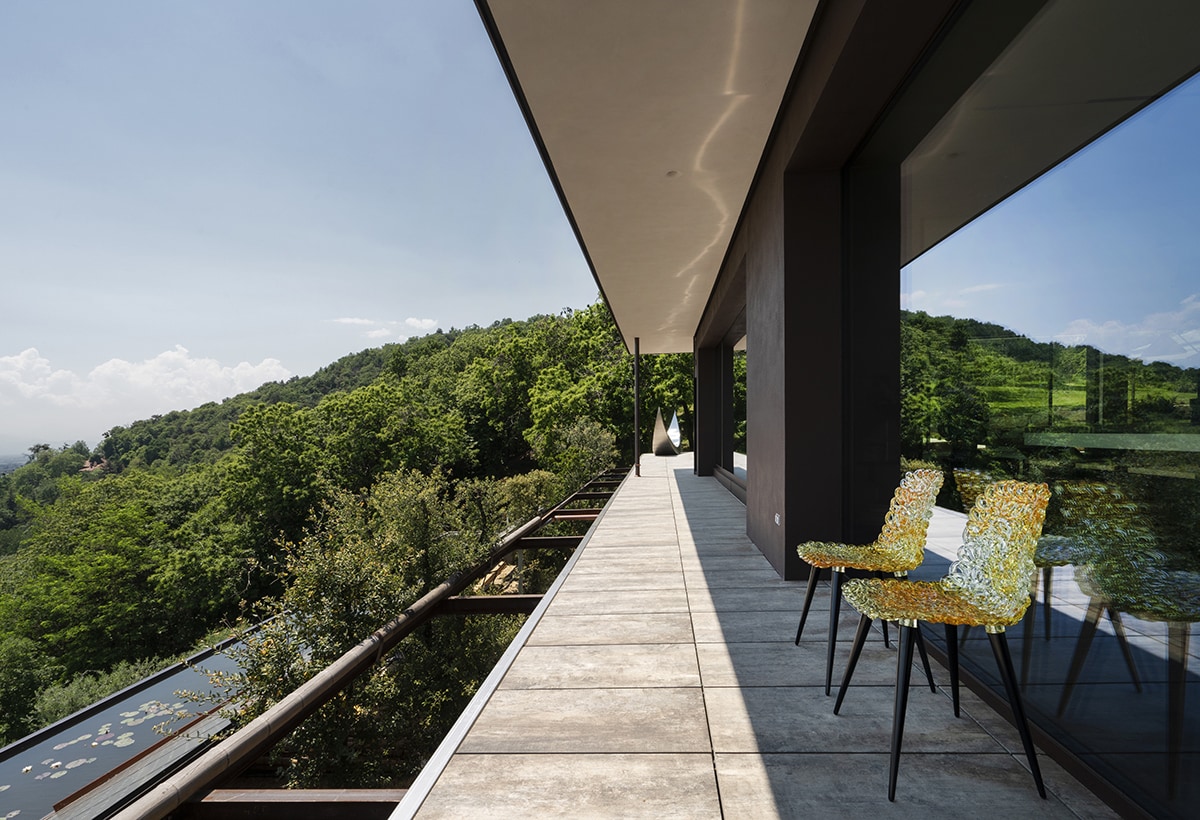 5
The belvedere offers a fine view of the landscape, near and far, from the terrace.

“The sunscreens placed on the windows to the north, for example, have decoration that seems almost like lace, inspired by a suspended ceiling that impressed me in a subway station at Fukuoka, due to the sensation of great calm it spread, in spite of the frenetic life of the city.” The choice of ‘packaging’ the roof of the house in larch shingles, entirely installed by hand, is also part of this creative tableau, free of preset schemes. With the warmth of the sun’s rays, the shingles change their color over time, passing from warm tones of wood to a burnished gray that is closer to the bark of the surrounding trees.

The bamboo canes placed outside like a screen in front of the guest kitchen will also be transformed (the guesthouse also contains a living area and bedroom zone). The teak deck is a true outdoor salon that tops the architectural promenade shaded by the overhangs of the roof, then orchestrating the gradual passage towards the large living room, facing south, that connects the more private part of the house (the nighttime zone) to the area set aside for guests.

“
This contemporary design embraces a Taoist philosophy in its approach, a matter of attunement. We have both assumed the role of ‘spectators’ of the eternal becoming of nature and its boundless transformations of forms and colors across the seasons and the years."

‘Idealized’ with two welcoming sofas by Edra – another long-term traveling companion of Duilio Damilano – a wooden table five meters long with stone totem legs and a totally open kitchen with glass walls, the space thrives on constant indoor-outdoor permeability, underlined by the large transparencies of floor-to-ceiling openings, and enlivened by other ‘disrupting’ motifs.

Elements of counterpoint include the ceiling of variable geometry and height, which adds dynamism and proportion, conveying a sculptural perception of the unified volume. Its facets are emphasized by the light, shifted off the ground and suspended to guide the gaze towards the micro-cement flooring. These perceptions establish relationships of a domestic landscape that does not shy away from confrontation with nature, its protagonist. All of its magic is revealed above all during the evening, when the internal space captures attention like a magnet.