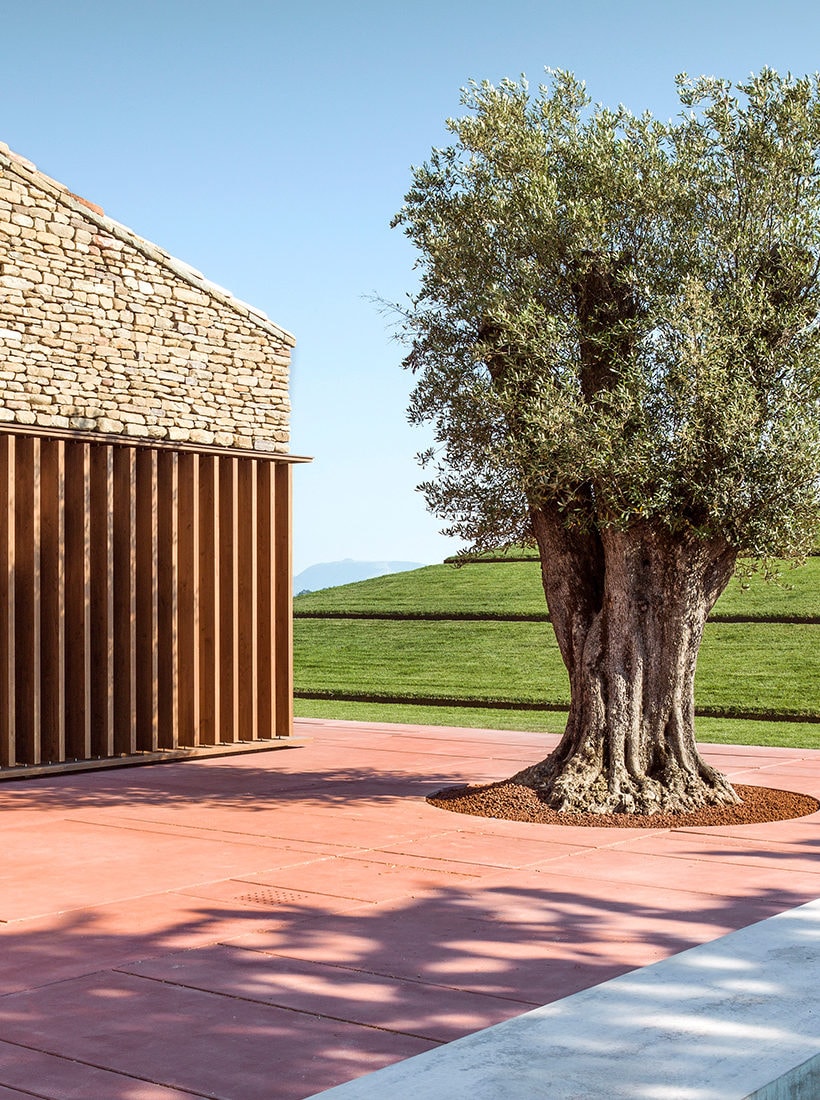 “He phoned saying that he had bought thirteen hectares of a hill, one of the highest in the Urbino area and, after sending us the GPS coordinates, he invited us to meet in this incredible location: a never ending Marche green wave, today part of the Unesco World Heritage, and once Piero della Francesca’s favoured landscape. Could we build a house together?”

This is how the project started, as told by Nicola Gibertini, co-founder with his partner Alice Gardini in 2005 of the studio Gardini Gibertini Architetti in Rimini. “We didn’t know the client, a foreign businessman,” Gibertini continues “but he had heard good reports about our work and knew about us. He was looking for a buen retiro for his family holidays where he could enjoy the silence of unspoiled nature and absolute privacy.”

He had found what he was looking for in this setting and for three years we shared with him the protection of an abstract space-time dimension. He in fact delegated everything to us: the architectural project, the interiors, the furnishings, and landscape design. Our guidelines were general mood (no concessions to local vernacular aesthetics), broad instructions on the spaces (there had to be a SPA, a cinema, swimming pool, and an ample study space), and a mantra (nothing around me).

An exciting framework for a consistent architectural expression, a goal the team has achieved connecting a residential architecture and landscape design project with – due to the many restrictions – the definition of a high performance platform in terms of technology and contemporary domestic comfort.

“If nothing was to disturb the perception and the enjoyment of this remarkable landscape” adds Alice Gardini “we worked around the idea of avoiding the parking and the sight altogether of any vehicle at the garden level.” The residential spaces (1080 square metres) include three units, two of which feature an underground basement connection and are based on a red cement platform (38 X 20 m) located on the lawn.

These buildings were built from scratch over traces of a mediaeval structure that determined the building’s proportions, ideally linked to the concept of the rebirth of an inevitably austere and quiet ancient rural town. This was also a way to reinstate a dialogue with the site’s historical stratification.”

These three dry stone structures (built with old recovered stones), with no architectural additions (no pillars, eaves, or drain-pipes, and with a shutter system inbuilt in the insulated fixtures), present the traditional shingled pitched roof typical of the Marche region and feature relatively small windows to retain the heat.

The first building contains the master residential area, the second a guesthouse (characterised by a chestnut tree frame underlined by streaks of light that by inverting the ratio, dominate the stone element, echoing a barn structure), while the third is a garden utility space (with storage space in the basement and a kitchen and barbecue on the ground floor).

This last volume, located on the top of a small hill and in a position that is not aligned with the other two buildings, makes the overall perspectives of the project more dynamic, introducing new elevated viewpoints from where to enjoy the landscape, providing a discontinuity in the orthogonal layout of the green area, marked by the sculptural presence of a centuries-old olive tree.

A tree that seems to have always been there. Just like the linear and archetypical concrete benches that flank the pool facing east and parallel to the long side of the three-floor main structure.

“The main entrance from the garage in the basement proved to be a good solution in wintertime when temperatures can be really low” explain the architects. A space defined by a refined and intimate atmosphere determined by the presence of a dynamic panelling system that grants access to the wardrobe, the cinema-room , and the art gallery – an exhibition space connecting to the guest house, the gym and the adjoining Spa.

The furnishings, designed by GGA architects and made in Italian natural walnut wood, qualify and organize the details of the house’s various spaces, concealing all service areas and domotic-appliances that are installed in the floors of the upper floors “echoing Kahn’s hollow structures and his concept of servant and served spaces”, comments Alice Gardini.

The ground floor is projected towards the outdoor garden and pool area, and houses the living room area, a private studio space, the dining room and the kitchen. The fair-face reinforced concrete structure of the perimeter, releases the volume from any other load-bearing element letting natural light flood in from the opening that integrates the staircase and the large balustrade landing on the first floor with access to the bedrooms. Lastly, the symmetrical windows, placed one opposite the other on the two long parallel facades underline the dialogue between architectural structures, light, and landscape.

On this floor, the house recovers the atmosphere of a double height hall revolving around a fireplace, where the contemporary taste of the project is deliberately underlined in the treatment of the materials, in the layout of the plan and the furniture design” adds Gibertini.

“Even here, the panelling and the walnut wood furnishings, designed by our studio and produced by Riva1920, conceal everything: all technological appliances, audio-video systems, and air conditioning units.

The kitchen, conceived as one large working surface, delimitated on the sides by functional panels, works in the same way. The linear uniformity of the whole project is counterbalanced by the colour and warmth of the wood, a material that bears witness to a long Italian tradition.

Even the resin used for the entire flooring, with a custom texture we had made especially for this project, delivers shimmering and variable effects depending on the light conditions throughout the day.

The same concept is echoed in the two site-specific installations by Milanese artists Alessandro Busci: the large enamel triptych on Corten steel, offering his interpretation of the landscape in daylight placed on the southern wall of the living room, and the large Light Box that instead is a interpretation of the nocturnal view placed on one of the walls on the balustrade landing on the first floor.”

In this particular context, the attentive study of light architecture delivered a great result. For this project, the architects collaborated with Rossi Bianchi Lighting Design and Viabizzuno. The two dimmer light systems (one for diffused lights and the other focusing on the artworks) and well-studied indents in the concrete surfaces were designed to accommodate track lights and spotlights (some of which were designed by them) resulting in an outcome of effective integration.

The result can be appreciated even more from outside, when on the side of facades, during the night, the lighting system relates to the shape of the heated pool (equipped with automatic pool cover).