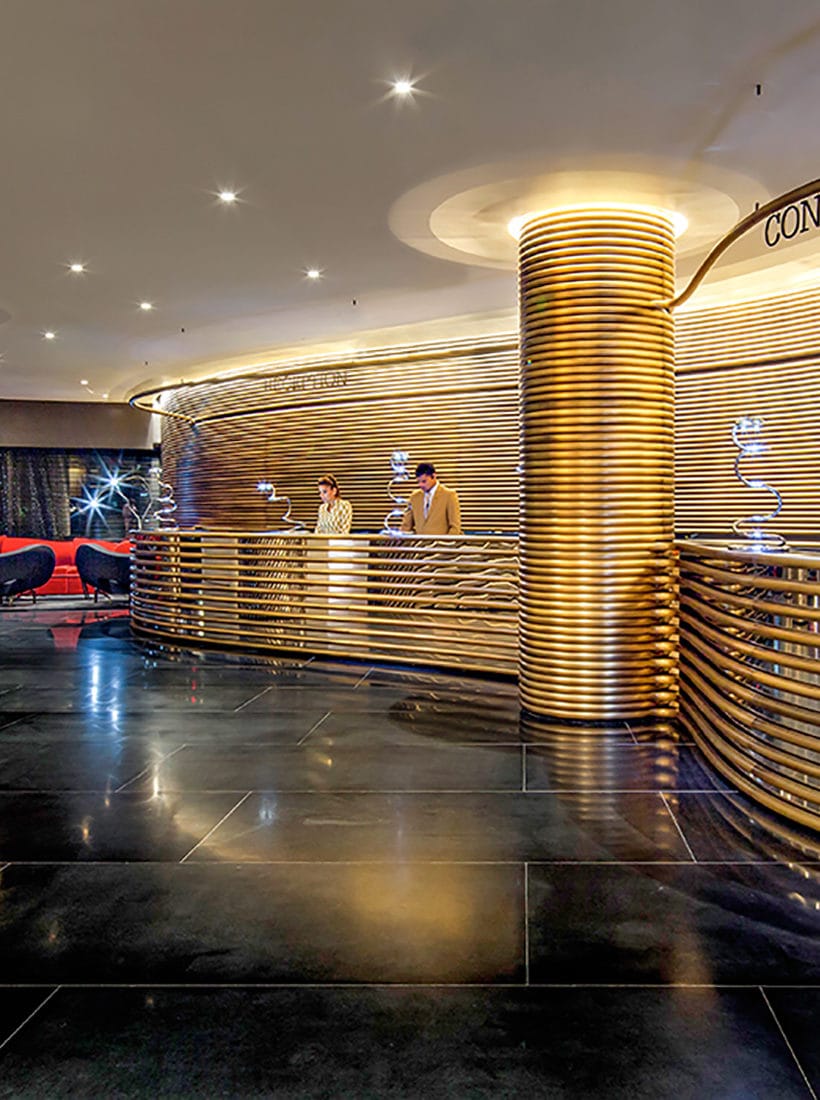 How can design material become exciting? Ron Arad has offered brilliant answers to this question ever since his debut on the international stage, when as an artisan-sculptor he began to shape and realize his one-offs in metal.

Time has done the rest, taking his experimental workshop towards the design of objects that function on an industrial scale. Time has also worked to the advantage of the space shown here, which has cast off the stigma of old scandals and begun a new life thanks to Arad.

“I have a confession to make,” says the architect-designer. “Our initial attraction to this project was actually connected with the political scandal of Watergate, which led to the resignation of President Richard Nixon in 1974. Starting with those impressions, it was amazing to discover an iconic place from that period, which is also a great architectural legacy.”

Ron Arad’s studio was asked to rethink the public spaces of the Watergate Hotel in Washington DC: 2000 square meters on two levels (ground floor and basement), for the lobby and elevator zones, the bar, the restaurant and the outdoor terraces.

“Coming to terms with what was already there, you could not overlook the context,” Arad explains, “but at the same time we did not want to indulge in any operations of imitation. We tried to find something complementary, but above all something innovative, capable of optimizing the original curves by Luigi Moretti, the Italian architect who built the place in 1960-65 inside a multifunctional complex, on a functional and expressive plane.”

Virtuoso use of metal tubing, selected as a material for invention, sustains the creative vision, configuring a new world of sinuous forms that play with material/immaterial metaphors, taking the spaces towards a dynamic, engaging dimension. An experiential place.

Walls, columns and counters, stripped of the modernist palette of Moretti featuring white plaster and marble, have substantially become something else on a compositional and aesthetic level. A new skin. Waves of bronze-patinated brass, copper and polished stainless steel generously convey a warm, heady chromatic range, relaxing arrangements and atmospheres, accompanying the coming and going of guests in the spaces.

The items have been made by a brilliant Italian producers, just as the design furnishings are also drawn from the most sophisticated sources of Made in Italy, in a context of fluidity and openness, underlined by the continuity of the black granite flooring (in the lobby) and other floors in ebony-stained wood (in the dining room).

A way to emphasize the coherent design of the parts, in term of polarization and regeneration. In the bar island the stainless steel frame comes to terms with the curves of the wall, staging a spectacle of 2450 whiskey bottles with their luminous amber glow, and encountering the verve of welcoming red upholstered furnishings and circular custom-made wool rugs.

In the restaurant on the lower level, on the other hand, the two-story column clad in mirror-polished stainless steel tubing enters a dialogue, beyond the perimeter glazing, with the landscape of the Potomac River, its temperatures and seasons. And like a sturdy tree of life, in the endless sequence of reflections, lights and colors, it seems to remind us that everything flows. Panta rei.