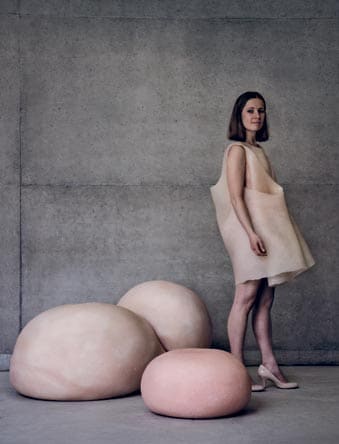 The meaning of objects is closely connected to our sense of the body.

This is why design, while on the one hand it cannot help but take charge of the body of the object, on the other cannot avoid transcending it in forms that go beyond their mere material evidence. This phenomenological dualism of the useful object, simultaneously immanent and transcendent, reflects the phenomenological dualism of the human body. Our body, too, is both a ‘thing,’ a piece of material subject to inertia and gravity, and a sentient device, open to the world. The distinction between these two dimensions of bodily existence is so important that in German there are two different words to refer to the body: the first, Körper, means the body as a physical thing; the second, Leib (from the old German “leiben,” “to live”), indicates the body as a sensory-motor device. Useful objects, then, though they are not part of the Körper (they are not ‘fused’ with our anatomy), in the moment of use become a whole with the Leib from a motor-functional viewpoint, just like legs or arms. A series of new projects – all by women designers, by the way – explore the constituent ‘chiasm’ between body and object, starting with the ambiguous Anomaly by the Swedish trio Front for Moroso. While this design is like a domestic presence suspended between visionary manipulation of a bodily strain and the organic transmutation of an alien creature, the creation of the Anglo-American designer Gigi Barker (Studio 9191) is even more disturbing, based on impregnation of the leather that covers the Body of Skin upholstered pieces with after shave lotion and pheromones, to reproduce the sense of touching a human body in forms that remind us of not very well defined anatomical parts. Less extreme but still along the lines of the ‘bodily’ product, the Flesh seat wrapped in ‘soft rolls of fat’ by Danish designer Nanna Kiil, and the M.A.S.S.A.S. sofa by Patricia Urquiola for Moroso, an elegant Franken-object obtained by juxtaposing limbs with exposed stitching. The Body by Finnish designer Kirsi Enkovaara seems like a supple segment of fleshy tissue (flesh tones are shared by all the projects in this survey) conceived to yield and mingle with the body of the user, in a wide range of different configurations. The latter, in particular, which literally ties together segments of the body-object and segments of the body-user, sculpturally illustrates what we were saying at the beginning, i.e. that the substantial continuity between objects and Leib is constituent to the very meaning of the object, so much so that the first has to be seen as a senso-motor limb of the second, which in turn cannot be thought of as a ‘thing’ but as a sensorial field that extends as far as the elastic boundaries of its objectual emanations. The rubber hand experiment, from this standpoint, is a revealing experience. Used in the field of cognitive psychology and physiology of perception, it calls for the subject to sit with one hand resting on a table and the other hand below the top, with a rubber hand positioned where the hidden hand would normally have been. The hand under the table is stimulated with a feather or light pinches, while the same stimuli are simultaneously applied to the rubber hand. After a few minutes the subject starts to clearly feel the sensations as being positioned ‘inside’ the rubber hand, which the brain has ‘adopted.’ This demonstrates that it is possible to feel sensations on an object that is actually detached from the Körper, but which becomes one with the Leib from a senso-motor perspective. This is why the Polish jewelry designer Ewa Sliwinska has created the Living Points Structure as a series of ornaments that amplify the kinetics of the body. These slender pieces visually convey the senso-motor projection of the Leib, like the rings that spread out on a pond when a stone has been tossed into it. While the Israeli fashion designer and illustrator Noa Raviv, in the Hard Copy collection, mixes the real substance of the body with the phantom-like substance of its objectual extensions in the digital era, in a very poetic vision.