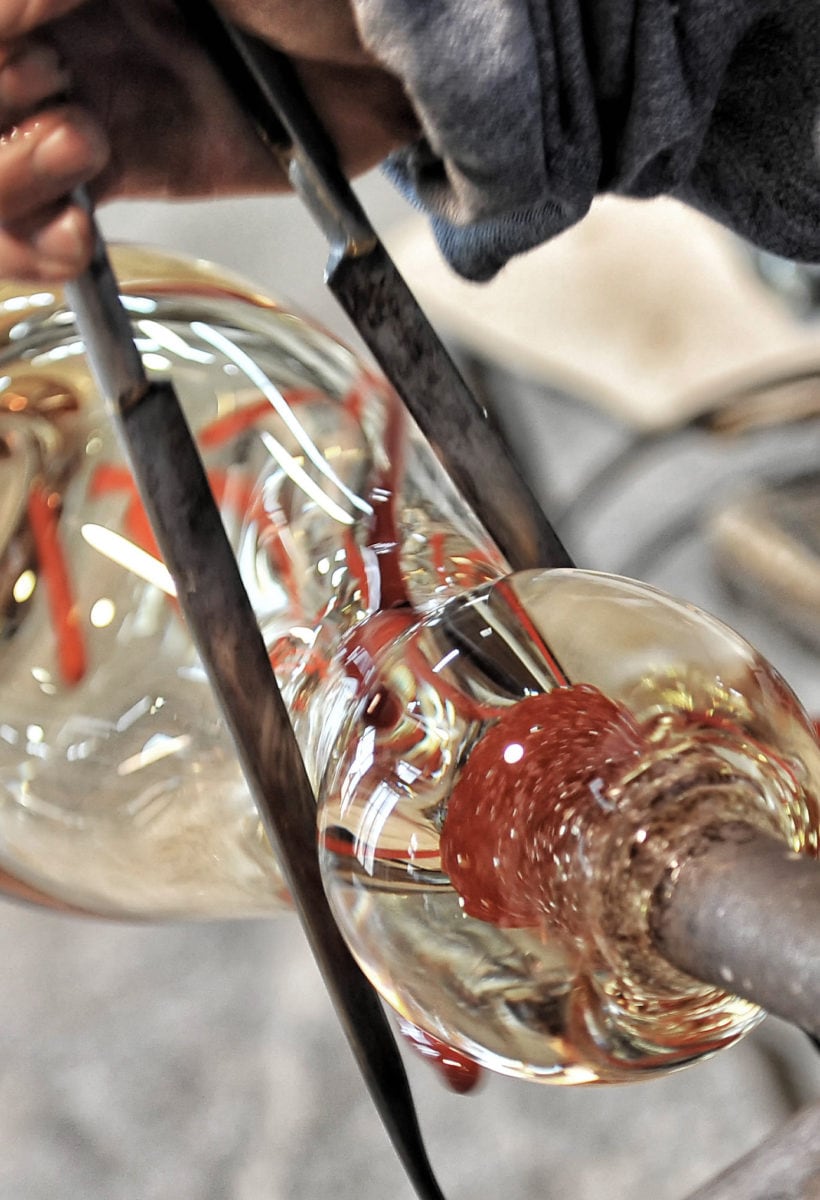 Philippe Starck reawakens the Gran Caffè Quadri and dreams of a role as a ‘creative mind’ of the city. Peter Marino protects history while accompanying the art of glass into the future. Different projects with the same goal: to give something back to the muse known as Venice

Philippe Starck’s Venice is a creature that needs protection. When he designed the official symbol 15 years ago, the winged lion, he wanted to “create a label to protect it, like an official seal.” Now the wings reappear at the Quadri, on the back of peaceful chimeras: hares, foxes, rodents, and a lion of San Marco walking on the ceiling.

Surrealist taxidermy. Starck-style, precisely. The restoration of the historic cafe-restaurant, which just reopened, is his second project in Venice for the Alajmo family, after Amo, the restaurant at Fondaco dei Tedeschi.

Here he pulls out the best aspects of his repertoire. He reinvents chandeliers, broccatelli, mirrors, paying homage to the high tide rather than trying to block it: for the legs of the tables, the entrance counter and anything that comes into contact with the floor on the ground level, he has chosen unfinished brass, which will oxidize and change colors with the rhythm of the tides.

The new Gran Caffè on Piazza San Marco is a choral effort: Starck has called on the architect and former rector of the Iuav (University of Venice) Marino Folin, in charge of the project, and the finest local craftsmen, from Tessitura Bevilacqua to Fonderia Valese, which made the sign. “I haven’t invented anything,” he says.

“I found what was sleeping under layers of paint, gave it a kiss like a prince in a fairytale – not so fabulous, in my case – and the Quadri woke up.” The Prince Charming of design has a long relationship with the world’s most beautiful city of water. “I came here once as a child, with my mother, but that is only a vague memory,” he says. “The second was 40 years ago. I came to Burano, where I lived in the only room for rent on the island.”

After spending lots of time there, he bought himself a ‘cabanon’: “My first house was just four meters wide, but the most amazing thing was that I was the only foreigner in Burano. I would always sit there drawing at the same table at Trattoria da Romano, and I became part of the community. Wonderful people, who have known each other forever. Cousins, brothers, grandparents, colleagues… they live and work together, and spend all their time together. For me, it is a model of a successful society.”

A small human capital, that of Burano and of the whole Lagoon, which should be safeguarded and helped to grow. For Starck this is more than an ambition: “For several years now I have been working on a project I cherish: I want to create an ‘economy of intelligence’ to replace the economy of stupidity based only on tourism. Venice is the center of western civilization. Thanks to easy access to high technology and tools of communication, it can return to its status as the creative brain of Europe.”

So his idea of building a ‘citadel of thought’ at the Arsenale hasn’t been completely put aside: “I can’t say much, but we do have conversations open with outstanding personalities, precisely to bring ideas of this type to Venice. I have a debt with this city, and I want to pay it.”

Starck is not the only internationally acclaimed designer who wants to give something back to the muse known as the Serenissima.

Peter Marino has also made a commitment to the city of the Doges. “My love for Venice has lasted a lifetime,” he says. “I am the president of Venetian Heritage and I am sponsoring the restoration of three statues by the sculptor Antonio Rizzo, one of the protagonists of the early Venetian Renaissance.”

The international non-profit organization, whose honorary members also include Anish Kapoor, Wes Anderson and James Ivory, has launched a vast campaign of restorations, also leading to the recovery of the facades of the Chiesa dei Gesuiti and San Zaccaria.

The three statues in white Carrara marble, Adam, Eve and Mars, will return to their original splendor dating back to 1470 thanks to a contribution of 225,500 euros, personally donated by Marino. For him, history is fascinating material. A great admirer of Palladio, he has visited the architect’s villas on the Brenta countless times.

On the Canal Grande, Marino the architect has left his mark on Palazzo Sernagiotto, where he renovated the first two levels years ago. Marino the designer, on the other hand, has recently come to terms with the art of glass. Black Belt, his limited-edition collection created for Venini, adds a new chapter to the iconography of the brand. The works are vases with apparently simple geometric forms – oval, square, triangle, figure-eight – crossed on the surface by thick bands of black: hence the name.

The ‘bondage’ effect is attenuated by the delicate colors of the glass (pink, green and tea). A refined aesthetic surprise made with the help of the master craftsmen of Murano, who have combined three different types of workmanship. The sbruffo and sommerso techniques serve to capture the color in the transparency, while the decorative bands are applied while hot in a third step, like a signature placed on the work.

Signature glass still has plenty to say, and Marino is convinced: “ Carlo Scarpa, Ettore Sottsass, Gio Ponti all worked with the Venetian glassblowers,” he reminds us. “The techniques developed by Venini in Murano date back to the 13th century. The brand has a long history of working with architects, creating unique collections for each designer. This is a big project, and it was a great experience for me. With this approach, I am certain that in the future there will be many more exciting collaborations.”

In the meantime, from the glassworks he conserves the memory of “the beauty and warmth of the yellow and red flames.” His Venice has no need to reinvent itself. It just needs to keep its flame alive.