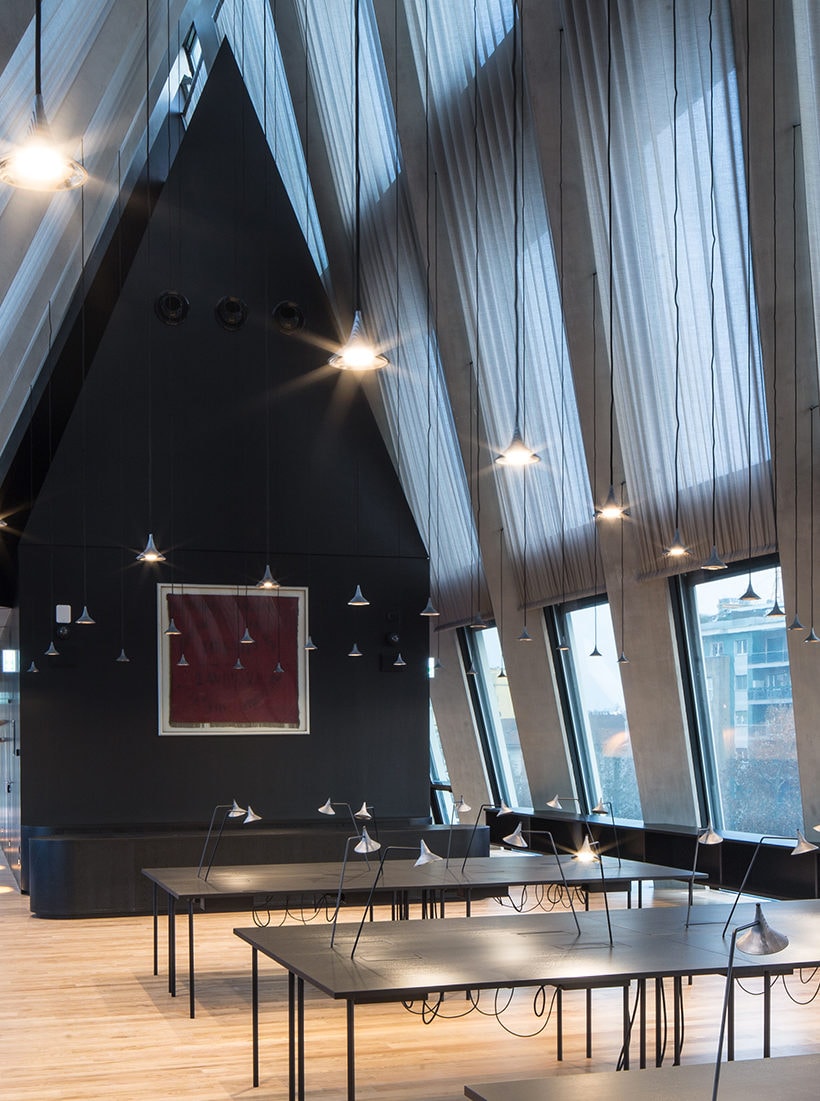 In your view, what is the biggest gift of Fondazione Feltrinelli to the people of Milan (and beyond), with this new ‘house’ open to the public designed by Herzog & de Meuron?

“An extraordinary sharing of values that put man, culture and hospitality back at the center, making something in which every part of the whole is the whole for that part,” is the apt summary by Carlotta de Bevilacqua, vice-president of Artemide, which took part in the project, together with UniFor/Gruppo Molteni.
“We have done our best to support this great manifesto open to the future: a humanism that should be defended, and a beautiful history,” she explains. “We have always been friends of the Feltrinelli family and we have a very similar culture, in terms of quality and philosophy, to that of the Molteni family. Never before have traveling companions been so close.”
Carlo Molteni, at the helm of UniFor, a brand of Gruppo Molteni, which also includes Molteni&C, Dada, Citterio, chimes in: “Fondazione Feltrinelli  and the collaboration with Herzog & de Meuron have allowed us to again approach the dimension of research that is always a great stimulus for the design of everyday things, considering the high level of creative freedom great architects put into practice in this type of public work.”

What kind of innovation has gone into your contribution, in relation to a work of architecture of great theatrical and symbolic power, capable of reassembling the urban fabric?
“If you understand the synthesis this place develops in the coincidence between structure, architecture and transparency, you can immediately understand that our contribution could not only be that of supplying standard products (ours are organized in five families of fixtures), but complex custom solutions,” Carlotta de Bevilacqua says.
“This building brings light to the city through itself, generating amazing density in its expressive simplicity, with the rhythm of its transparency, developed lengthwise and already perceptible with the gaze from the outside, reflecting the pace of the people, activities and projects contained in the Foundation facility, channeled by the brilliant direction of the secretary general Massimiliano Tarantino, all the way to the neighboring spaces of Microsoft. The true challenge was precisely that of transparency.
We asked ourselves how to light a building with north-south exposure, that receives continuous light, from natural light to the passive light of the city, working in terms of the themes of the architectural design. The development of an incremental light orchestration, that starts from an apparently simple platform but is actually very sophisticated in its electronics, has allowed us to explore all the possible dynamics. In this sense, for one year we first monitored small zones in the interactions with natural light, which are very different on the north and south sides, to foster an optimal combination with it. The choice has led to good results in terms of energy and physiological and perceptive wellbeing, which without the invasion of artificial light maintains the correct performance levels, allowing the tone of the light to shift throughout the day.
We then observed all the activities contained in the building, on five levels, formulating flexible luminous layouts. In the reading room on the upper level the technical lighting project meets with its maximum expression in terms of theatrical perception of space, establishing a dialogue with the large windows through a cascade of Unterlinden fixtures designed by Herzog & de Meuron in 2014, which in a special finish and table version anticipate the manufacturing evolution of materic intelligence.”

Everything is carefully thought out and balanced, in substance, for the lady of photonics, the science of light. In the virtuous vocation of this Italian system, what is the contribution of UniFor?
“I can respond by mentioning just three objects made specifically based on the design of Herzog & de Meuron for the Foundation,” says Carlo Molteni, “which say it all about the technological-expressive innovation we have developed for this project.
First of all, the large bookcase in open-pore black stained oak, which echoes the pointed silhouette of the roof, on the back wall in the reading room on the fifth and last floor, totally integrated with the architecture for great narrative impact. The same material has been used for the suspended bookcases in front of the inclined glass of the facades.
The interior walls are formed by transparent panels of glass, without support sections on the levels set aside for the offices. These partition elements were made in collaboration with Coima Image, floor to ceiling, with a natural aluminium structure attached to the ceiling and glass surfaces that are inserted in the floor, as if they were embedded.
Finally, the reading tables and desks with built-in lighting, also designed by the architects, fully comply with the project’s accent on lightness.”

The “future of my type of industry is crafts,” said your uncle Carlo, president of the Molteni Group, during an interview. Would you like to add something to that statement, in the light of this project?
“This observation sums up precisely the perspective that sets us apart and makes our products recognizable everywhere. The craftsmanship we refer to is know-how that is in step with the times, extended at this point to all the materials that can be used in projects, with solid roots in the excellence of the tradition of Brianza.” The excellence that grants emotional impact to material.