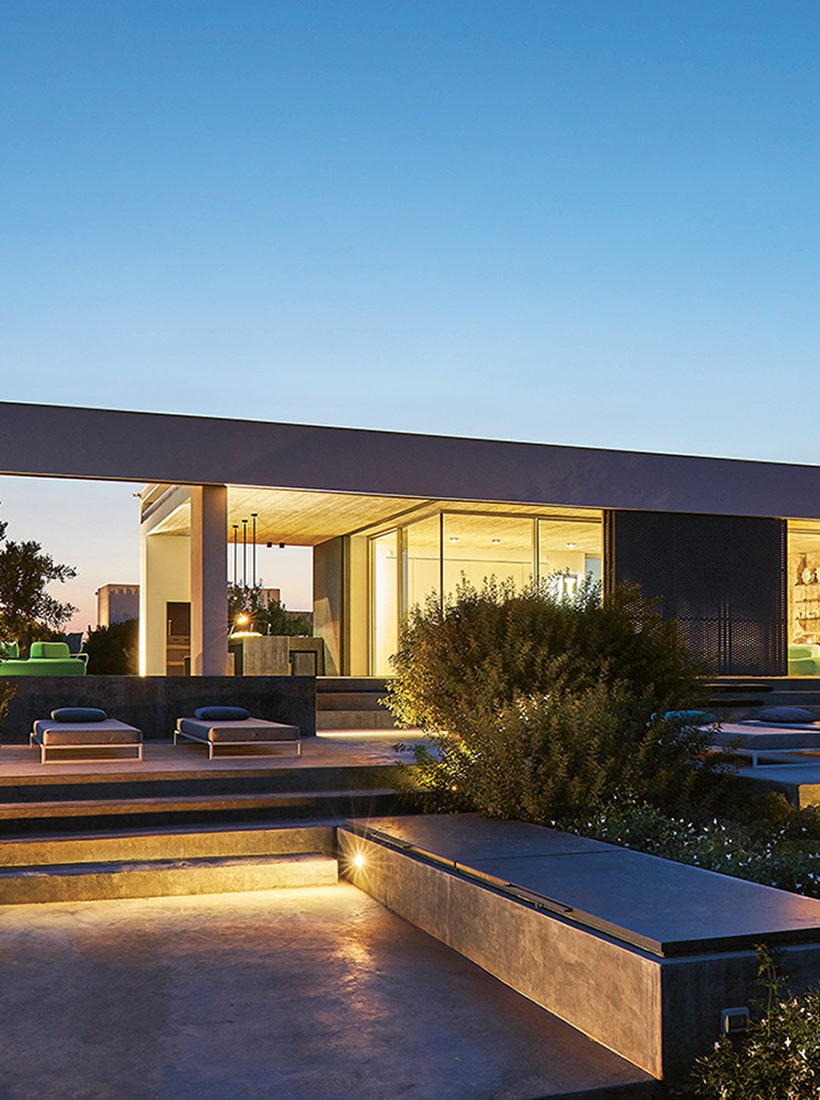 Wolfgang Goethe, looking at the Mediterranean for the first time, wrote in his famous Italian Journey: “That great simple line has given me completely new ideas.”

The same impression came to Marco and Cristina Merendi, gazing at the sea in Sicily. He is an architect and a designer, and the infinite horizon has inspired a new, stimulating project. She works in the world of fashion, and this was a chance to create the home of her dreams (and a place of marvelous vacations in the midst of nature for their kids).

We met them in Milan, where the architect Merendi has worked for 20 years on design (gaining many honors for his lighting fixtures) and interiors for yachts, installations, exhibitions, private homes.

Lots of passion, new approaches to research and experimentation with forms and materials, and the soul of a dreamer: this, in short, is the profile of the designer of this villa in Sicily, which extends along the ‘great simple line’ of the sea on one side, and embraces the Vendicari nature reserve, near Noto, on the other.

How did the project of your house get started?
Cristina Merendi: By chance. We were vacationing in Noto, for the first time. Driving by a hill on the way to the seaside, I had a sudden urge to see what was there beyond it.
I left the family in the car and climbed up the slope. At the top I found a breathtaking view: the ‘line’ of the sea was an endless horizon that met the sky…
When we got to the beach I was still curious, so I began to look for advertisements for land up for sale in the Vendicari area, on my mobile… and a photo appeared, which looked just like that field at the top of the hill.
I called the agency, made an appointment, and the next morning I found out that it really was the place I had visited. Three days later we were back in Milan with great news: we had become the owners of land in Sicily. At that point I told my husband we needed a vacation house…”

So that’s where you come into the picture, Marco…
Marco Merendi: Yes, of course, but designing a house from a distance of 1500 kilometers, in an isolated rural context, was not so easy. How would the project develop? In what direction?
Once again chance played a role. Before the vacation I had given my wife an interesting book that tells the story of a very famous house: the Farnsworth House by Mies van der Rohe, one of the masters of contemporary design.
Cristina was very impressed, and she told me, jokingly: “a house like that would be perfect for that place: it has to be free, independent, modern, immersed in nature.”

That’s a tall order, in terms of inspiration…
MM: Indeed. But it was a pivot of agreement. We began to work (and dream) in unison. We didn’t start construction until the project was complete, down to the details. Starting with in-depth study of the context, even the plants in the countryside…
CM: It’s true. My husband is talking about the beautiful mastic trees, a native species, almost unknown elsewhere: they are large spherical shrubs that can be 70 or even 80 years old, and reach a height of 4 meters. The house embraces them, adapting its form to their presence.
MM: The building has been inserted in a protected area, facing the nature reserve of Vendicari. The design respects the rules and the landscape, almost physically containing it, in pursuit of an ongoing dialogue between nature and architecture. The symbiosis with the context is also expressed through the choice of local materials, like the beautiful stone of Noto, the lava of Etna…

So the house is the result of an encounter between living space and landscape?
CM: Yes, but also of a good relationship with people. I would like to mention Rosario Parrinello, a Sicilian entrepreneur, whose company Madeamano has spread the word about Caltagirone ceramics all over the world, which we have reinterpreted in a contemporary language.
MM: Another precious contribution was made by our friends Ivan Gallo, a landscape architect, who helped us discover the beauty of nature in Sicily, and Davide Groppi, who gave us good advice to fit the building into the context, also in terms of light.

The results?
Unexpected: the house doesn’t light up, it turns off, respecting the darkness, the aromas, the silence of the land.

So the island had a fundamental role?
MM: Naturally. Living in Sicily was the main challenge, to do it in an authentic way. We returned there many times to breathe in the place, to understand the light, the climate, the wind… the house is a typical work of Mediterranean architecture, open to the sea and nature, a sort of transparent aquarium without a definite spatial ranking, to be used with total freedom throughout the day. Sheet-metal sunscreens run along the facade, shaping and fragmenting the light in the warmest hours, creating origami-like designs on the floor, like the textures of Arabian architecture.
They also ensure security while allowing air to circulate. But the building is still quite private in the bedroom area, more closed, with small oblong windows framing the sea.
Because seeing through, beyond walls, constantly shifting the vantage point of the observer from outside to inside, and vice versa, is the leitmotif of the project, the landscape always crosses the body of the house in a seamless way.

When is your next trip to Sicily?
CM: For summer vacation. We can’t wait!..