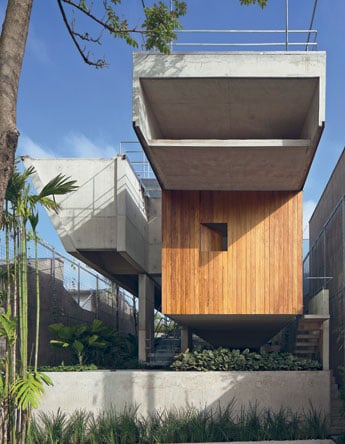 Six meters and… the sky!

Six meters and… the sky!

In the country that will host the World Cup of soccer for 2014, the architectural projects offer a glimpse of the pursuit of modernity and a new future, also when it comes to the urban residential scene.

This is true of the weekend house in the city shown here, based on precise contextual analysis: São Paulo, a metropolis of over 20 million people, the world’s third largest city, a galaxy that seems endless, where traffic is still a very serious problem. Due to the daily jams, local residents spend plenty of time on commuting. And on weekends, especially in the summer, the situation gets worse on the roads leading the beaches on the coast, about one hour away. “Precisely to avoid sitting in traffic on weekends,” the designers of the studio spbr guided by Angelo Bucci explain, “our client had an unusual but understandable request, to imagine a home with a pool in the center of São Paulo, between Avenida Faria Lima and a metropolitan infrastructural axis (streets and rail lines) built on the banks of the Pinheiros River, where flights from Rio de Janeiro pass every seven minutes or so. He was looking for a place to relax, but in town.” The studio of Angelo Bucci is in the avantgarde of the local architecture scene, linked to the multiple history of Brazilian modernism, reinterpreting its DNA with an experimental approach. His structural works do not try to timidly blend in, but thrive on daring, displayed grafts, perfect interlocks between elementary volumes and rugged exposed concrete surfaces. His works have a way of taking places over, even meeting the challenge of the powerful tropical vegetation. The rigorous, essential lines, mostly in gray, remind us of the work of Paulo Mendes da Rocha – especially his famous Museum of Brazilian Sculpture, built in 1988 as a gigantic beam, free in the span – also mix seductive touches, as in this recent project: a brutalist ‘box’ in concrete, wood and glass on the outside, with a sequence of open levels and fluid spaces, permeable to intense contact with the natural setting, in the interiors. The project developed precisely in relation to reflections on the theme of water, as requested in the brief. “Clouds, rain, snow, hail, in all its physical states water is related to the sky,” the designers say. “But when we think about a swimming pool, our imagination immediately wants to dig into the ground. Seas, lakes and ponds explain this reaction: in substance, a pool is a surface defined by water, intimately linked to the host terrain. But when we think about a pool as a reservoir, or a water tower, the imagine becomes that of a raised volume, detached from the ground. In this case, the hydrostatic pressure remains a factor to control, with pipes and technical systems. The water level becomes a potential possibility. While walking, we might ask: where is the surface? In the precise sense of the term, the surface has no layer, no thickness. In a city like São Paulo (or New York), there are portions of land that haven’t seen sunlight in years, since they were first cast into shadows by the buildings. In this specific place, the average height of the neighborhood is set by zoning: 6 meters. The building to the east casts shade onto our site from dawn to noon, when the construction to the west takes over, performing the same task for the whole afternoon. So if we wanted to build a swimming pool that would get sunlight throughout the day, first we had to define its surface: six meters above ground level.” Based on this analysis, the architectural composition of an ideal pool ‘near’ the sky over São Paulo was the first step in a design that turns spatial hierarchies completely upside-down. With an unconventional approach in terms of ratio of area, the pool, the solarium and the garden have become the main features of the project, while all the rest is auxiliary: the bedroom, the small flat for the custodian, the space for cooking and entertaining. The pool and solarium have been organized as two parallel volumes. Two columns appear in the large interspace between them. A tunnel of light marked on one side by the load-bearing beams of the pool, and on the other by the support beams of the solarium and the overhanging slab of the level below. In structural terms, the mass of the pool acts as a counterweight for the volume containing the living spaces. The ground floor has been kept as free as possible to obtain maximum extension of the garden area with its flourishing vegetation, which only looks spontaneous. In essence, the ‘pool-house’ is thus composed of three different layers (or levels) corresponding to three moods: the garden level, introspective and closed inside the site perimeter, opening to contain the entrance and living zones; the middle level for the nighttime spaces (which ‘float’ in a fluid way over the ground and under the pool), and the rooftop, with the pool and solarium, conceived as an extroverted, panoramic promenade. It is the alchemy of a city house created six meters off the ground, to capture light, water and the sky throughout the entire week.