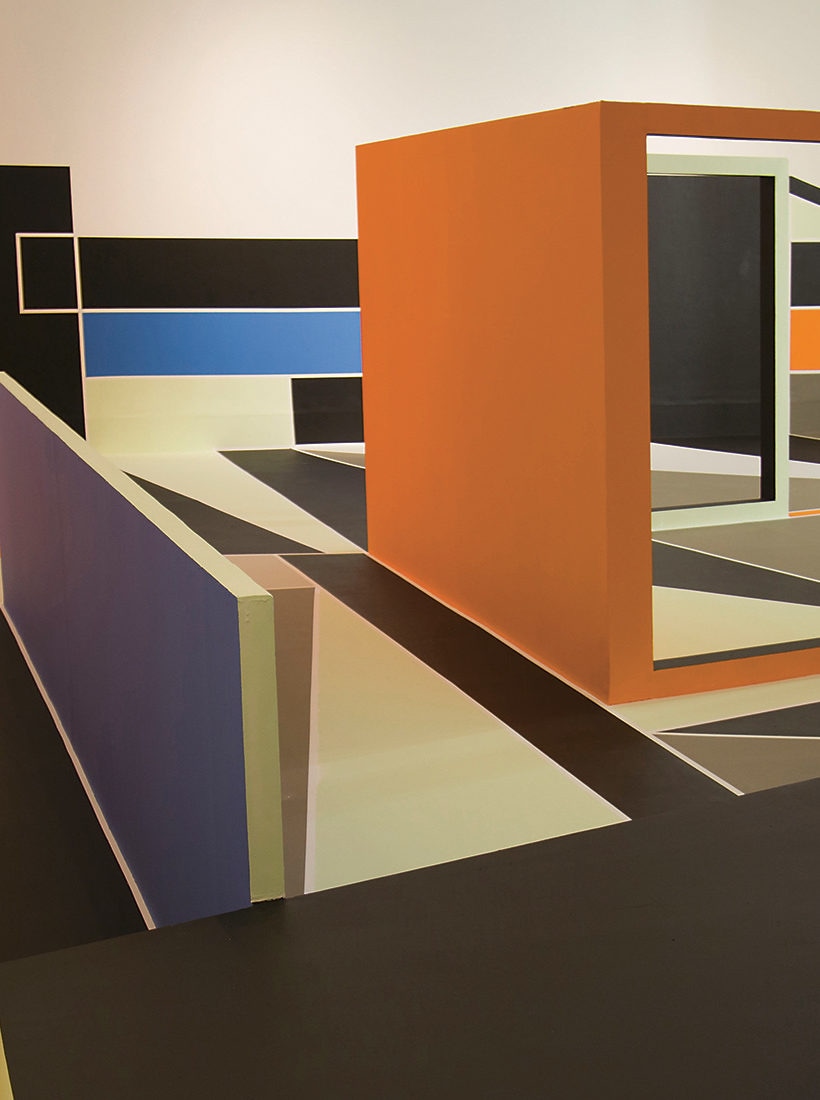 Raymundo Sesma is an artist who thinks big. The scale of his painting is literally architectural. Operating since the 1980s in Milan and Mexico, his homeland, he has always focused on the idea of social architecture, working – especially over the last 20 years – on the transformation of forgotten urban structures into ‘open works’ for physical and intellectual engagement of the society.

A reader of labyrinthine philosophy, like that of Borges or Gilles Deleuze and Félix Guattari, and of dizzyingly angled reflections on color such as those of Wolfgang Goethe and Ludwig Wittgenstein, Sesma has long been accustomed to working on both sides of the Atlantic, a professional arrangement that has allowed him to define the meaning and direction of an utterly original creative path.

As he puts it, “the product of every artist is always autobiographical, to the extent that we are what we have experienced, seen, learned, processed. In my case this is true of color in the architecture of Le Corbusier, the painting of Édouard Louis Dubufe, Pre-Columbian architecture, Maya murals, Mexican  painters and mural makes like Diego Rivera, José Clemente Orozco and David Alfaro Siqueiros, and in particular the theory of multi-angularity. Speaking of Italy, we cannot overlook the Sistine Chapel with its perspectives, color and context, or the project by Corrado Cagli at the Milan Triennale in 1951, and I could list many other things I have seen and analyzed. Each of these artists has their own research, their own specific intention; in the work of one religion stands out, in the work of another it is the decorative aspect, in other cases it is the functional character.”

Precisely these ‘multi-angular’ references go into a composite architectural sign, multi-faceted, prismatic. An carver of color, a director of diffracting geometries, Sesma works like an architectural alchemist whose ability to manage hues by fragments, defining while opening space at the same time, reminds us of the unyielding polychromy of the Italian masters of Studio Alchimia, Alessandro Mendini and Alessandro Guerriero. Nevertheless there are also other factors in Sesma’s work, the sense of a dense, warm, dendritic urban character, in which the architectural substance of concrete forms a whole with the graphic abstraction of color.

Architecture and painting hold themselves together because “the artist works not by imposition but by analogy, making an a priori interpretation of the context on which to intervene from the viewpoint of structure, design and scale, as well as landscape. Once the interpretation of all these elements, including color, has been produced, the design is redefined in terms of context, without overlooking the purpose of the building, seen as an open work of which the viewer is an integral part.”

Rather than a mere accessory, constructed color plays a substantial role in the definition of the aesthetic economy of the project. Sesma cites Giulio Carlo Argan, according to whom “it is not possible to visually represent space without the perception of the chromatic reality. This concept of Argan is very important, because it defines the central role of color applied to architecture in a landscape sense, a conception that is in conflict with that of the architect who does not know how to operate through color and considers it simply as a decorative feature. Actually, color is the only way to grant a ‘natural’ dimension to an urban context, since concrete covers nature, while color restores it.”

There is not a building, first, which is then decorated, but a building itself whose inner perspectives, the graphic triangulation of its planes, crossing from inside to outside, take on the consistency of a true ‘landscape painting’ that breaks down the building according to architectural logic and reassembles it according to graphic-chromatic logic. In this way, color design takes on an authentic therapeutic value with respect to society, a responsibility which architecture, given its scale and the area of application of its intervention, can and must assume: “I believe the contemporary artist, more than ever before, has to get involved today, on the territory of his direct intervention and in terms of experimentation with the world. For me this is a priority. The urban decay of big cities is a theme that must be taken into account and analyzed, thinking of a hypothetical urban intervention oriented towards renewal, to give back to society a possible future far from aesthetic and functional deterioration.”

So if art is an “umbilical cord that allows us to understand the cultural process of man as society and as thought,” then chromatic architecture appears “as a sort of public art in which it is the whole society that activates the work and takes possession of it.” A work that will be open, multicolored, multi-angular, “multi-disciplinary in its constitution and perception,” precisely like the social body to which it is addressed.